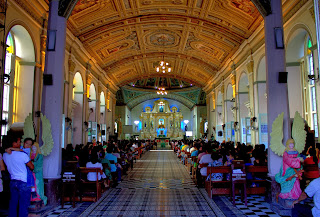 I had plenty of time to cycle to the port; the ticket was 600 Pesos & 128 Pesos for the bike.  We left at around 11h00, no sooner were we underway and we hit rough seas.  The ferry rolled and pitched wildly, people yelled and hung on to one another.  Seasick bags were in high demand as our ferry rocked and rolled in the high seas. I started looking around for some kind of floating device but did not see any.  There was not much I could do but sit tight and hope for the best.  Water poured in through all conceivable nooks and crannies not fully sealed.  To everyone’s relief we arrived at Jagna, Bohol two hours later.  The wind was still pumping and I was in no mood to battle into a head wind.  I found a room for 250 pesos and hoped that the weather would subside by the following morning.

Later in the day I took a walk to the old church (1808) which still seems to be the center of activity in town, there seemed to be some kind of celebration going on, complete with food stalls and balloons.  I understand that it is one of the oldest and the largest in Bohol. 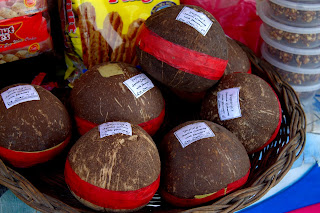 I passed many stalls selling Bohol's best-known delicacies, Kalamay (Kalamayhati), a sticky and very sweet paste of sticky-rice flour and coconut milk, packed in a coconut shell, sealed with a characteristic red tape.  I did not buy any, as it looked rather sweet.

Bohol forms part of, what is known as, “The Visayas”, a large cluster of islands in the middle of the Philippines.  The Visayas consists of 1000s of islands but there are 9 main islands, being Cebu, Bohol, Guimaras, Samar, Leyte, Panay, Negros, Romblon and Siquijor.  I seriously feel I´m going to need more than one visa extension!!!

First thing in the morning I headed to the Municipality to get a map of the island. While waiting for their doors to open, I had breakfast at a roadside stall across the way. Map in hand, I set off in an anti-clockwise direction around the island. It was a fascinating ride and very different to Mindanao. I passed mangrove swamps, strange looking hills, a multitude of small villages, and sari-sari stores. I even spotted a giant lizard or two.

Once in Talibon I was surprised to find yet more history. The town is home to a beautiful old church built with blocks of coral rocks (not very eco-friendly); ironically it was also built by slaves!  Construction started in 1852 and was completed in 1899 (it sounds like they were not in a great hurry). Even more bizarre is the history of Talibon: Ferdinand Magellan escaped from the hands of Lapu-Lapu's men who were seeking revenge for the raping of fifty virgins of Cebu. The ship, Trinidad, sailed towards the direction of Getafe-Talibon, where some of the crew disembarked and mingled with the natives, educating them in Christianity!!!

24 September - Talibon–Tubigon- 60km
I packed my mobile home and continued on around the island. It was boiling hot and the locals kept calling me in to sit down and have something to drink, as they were convinced that I was going to get heatstroke. Although it was very hot I did not think I was going to suffer from heatstroke!!  I soon reached Tubigon and decided to go and have a look at the famous Chocolate Hills.

Chocolate Hills - all 1268 of them, and there is a legend!  Apparently, these hills are the calcified tears of a giant, whose heart was broken by the death of a mortal lover. No sooner were I there and it started raining, so I did not come away with any good pictures.

In Tubigon I looked around for a room and cycled down a dirt road, past locals’ prized possessions, their fighting cocks, until I reached Tubigon Beach Resort. Resorts come in all shapes and sizes, from five-star to rickety huts on stilts…. I guess this was the rickety hut on stilts. The walkway did not look all that secure and the floor of the room was rather springy, to say the least, but at 350 Pesos I could not complain.It even had a shower and toilet. The water, however, drained straight through a hole in the floor and ran out underneath the hut. The toilet was halfway between a squat toilet and a throne. I did not check the toilet to see where it drained.I hope it was not the same as the shower!!!

I knew it was not going to be a long day on the road, so I took my time and stopped at each and every conceivable place that looked interesting. I followed the coast past small villages, each with its own fascinating history. The road ran past large areas of mangrove swamps, which also turned out to be the habitat of a species of crab-eating macaques.

I soon reached the busy city of Tagbilaran from where there is a bridge to Panglao Island. About 25 kilometres down the road I found the famous Alona Beach, and saw some European tourists for the first time since arriving in the Philippines. Things were a bit more pricy than elsewhere in the Philippines, but I found a room and settled in.

The following day I went to the Tarsier Sanctuary - how very fascinating!!  The Philippine tarsier is tiny, measuring only about 85 to 160 millimetres (3.35 to 6.30 inches) in height, making it one of the smallest primates. It was therefore rather difficult to spot and even harder to photograph, as it is only about the size of a human fist and it can easily fit into a person’s hand. The interesting thing is that its eyes are fixed in its skull andcannot turn in their sockets. Instead, the head can rotate 180 degrees. I also understand that they have the largest eye-to-body-size ratio of all mammals. The tarsier is a nocturnal animal and the big eyes provide for excellent night vision.The tarsier maybe small but has a home range of 1 to 2 hectares, a lot of ground for such a small animal. The females give birth to one thumb sized baby per annum, and carry their infants in their mouths.These little creatures are now sadly endangered. I stayed on the island one more day, not doing much at all, just hanging around.
Posted by Leana Niemand at 4:31 AM