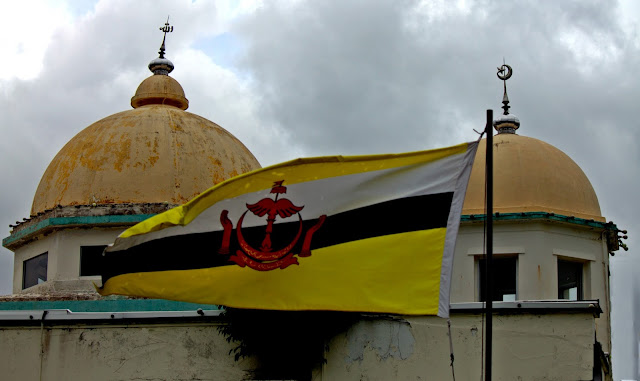 As I ventured further east, I soon crossed the border into tiny Brunei, and I mean TINY, as it is no more than one hundred and fifty kilometres from the border to where I plan on getting the ferry to Sabah.

Brunei is quite interesting. Firstly, it's a Sultanate and a very conservative one, as well. It is a rather wealthy country and home to one of the richest men in the world, the Sultan of Brunei, worth a cool US$22 billion, all thanks to the discovery of oil. Education and Healthcare is free, houses, cars and even pilgrimages to Mecca are subsidized, and taxation on personal income is unheard of.

This all means that there are plenty of fancy and fast cars on the road. The problem is that not all owners of fast cars know how to drive. Add alcohol to that combination and it becomes real dangerous on the road. Brunei is a dry country but, judging by all the empty beer cans next to the road, they don’t all adhere to that rule. 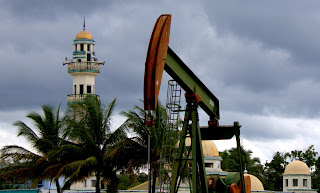 All day long a threatening storm loomed just ahead of me, but besides a few drops every now and again, nothing come of it. I pulled into Seria (the first town along the way), drew some money and headed off again. I reached Tulong at around 16h00 and thought it a good place to overnight. The only hotel in town was hellishly expensive, but I took a room anyway.

It is the second day of Hari Raya Aidilfitri and all business were firmly shut, except for one small supermarket. I therefore had to dig into my emergency supplies for food. They do come in handy from time to time!!

10 August - Tutong – Bandar Seri Begavan - 55km
As I said, it is not a big country and I soon arrived in Bandar Seri Begawan (or just Bandar), the capital of Brunei. Along the way I stopped to buy a cold drink and when I wanted to pay, the owner told me that was already paid for!!  Another customer paid for it!!  It is not every day that a stranger pays for your purchase. 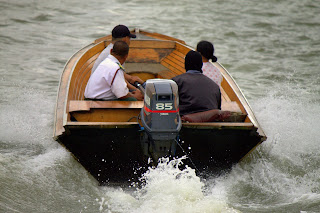 As soon as I arrived I jumped on a water taxi to Kampong Ayers, which is situated just across the river. These boats are also known as coffins, due to their shape and speed!!  Not so long ago Kampong Ayer was all there was to Bandar. The entire village consists of houses on stilts and stretches about eight kilometres along the Brunei River. It is said to be the largest of its kind in the world, with approximately 30,000 residents. Self-contained, the village is equipped with schools, police stations, clinics, a fire brigade and mosques. The houses are connected by a complex web of walkways and bridges; needless to say, I had some fun walking around. 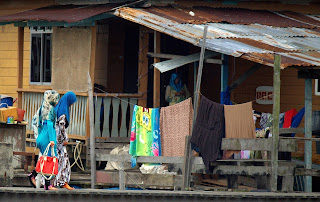 Once back on the mainland, I took a walk to the Sultan Omar Ali Saifuddin Mosque.  The Mosque was built in 1958, and it features a golden dome and, I understand, an interior of Italian marble walls, carpeting and an elevator. It, apparently, also has tunnels, which are used by the Sultan on journeys through the town. The forty four metre minaret makes it the tallest building in town and don’t try to outdo it!!! Apparently, the Islamic Bank of Brunei's building originally exceeded this height, and consequently had to have its top storey removed, by order of the Sultan. 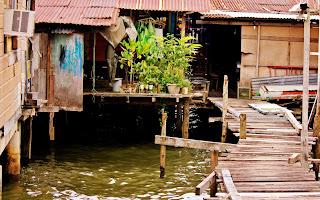 Later that evening I once again jumped aboard one of the coffins to get a view of the Sultan’s Residence. I thought one could maybe get a pic, but the view was not such that it was possible. It is, however, quite a building with one thousand seven hundred and eighty eight rooms, and is bigger than either Buckingham Palace or the Vatican. He apparently also owns two Boeings and five thousand cars!!  (That is not a typing error - it is really five thousand cars!!) 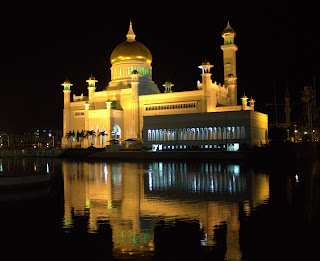 10 -11 August - Bandar – Muara, Brunei – ferry to Pulau Lubuan – Kuala Penyu, Sabah - 75km
I kind of knew that it was a short ride to Muara, where I expected to get a ferry to Lawas. I took my time and cycled the short distance to the ferry terminal at Muara. Once there, I discovered that ferries only run to one destination, being that of Pulau Lubuan. From there one can get ferries or motorboats to various other locations.

The ferry was at 13h00, so it was not too long a wait at the port. Once inside the ferry, it reminded me a bit of a submarine, and as soon as we were underway I hoped that it could provide the same functions, as the seas were rough and the boat rolled valiantly from side to side. I found the ferry a bit claustrophobic as it is a tubular, cigar-shaped contraption which is fully enclosed. It must have been a fast ferry, as an hour or so later we arrived at Pulau Lubuan.

From Lubuan I could see the mainland and decided to take a motorboat to the tiny village of Menumbok. With the bike strapped onto the roof we sped across the open seas at breakneck speed. I clawed on for dear life and could only hope that I would not see the bike floating behind us.

Relieved I arrived in Menumbok - my bike and I still in tacked. I saddled up and cycled the forty odd kilometres to the next village of Kuala Penyu. I was pleased with my decision as this is such a remote part of the country that I'm sure no one ever comes this way. There would also not be any reason for anyone to venture out here, as it is kind of a dead end. In fact, it was so remote I even stumbled upon the place where the first “Survivor” series was made.

Posted by Leana Niemand at 5:08 PM