I arrived at my hotel in Paris, dead tired as usual. There I was in Paris, located on the River Seine and home to Chanel, Dior, Louis Vuitton, Yves Saint-Laurent etc. I didn’t, however, have much use for any of these stores. I was wondering if I would even have time to visit any of the famed touristy places i.e. Notre Dame, Louvre, Eiffel Tower, Arc de Triomphe etc.

I soon met the other cyclists, all busy reassembling their bikes after equally long flights. With the help of our bike mechanic, Gergo, my bike was soon in tip-top shape. My bike lock seemed to be the only thing of importance that I had left behind. Marion and Barry (from Australia) kindly lent me one of theirs until such time as I could pick one up along the way. Together with David and Edna (also from Australia), I had an early bite to eat and then it was off to bed. 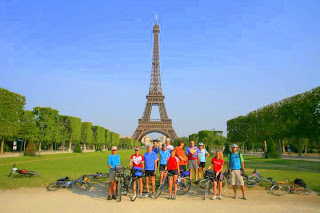 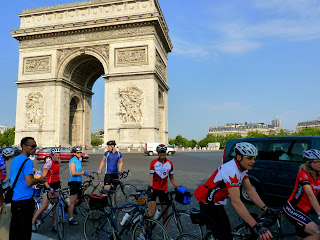 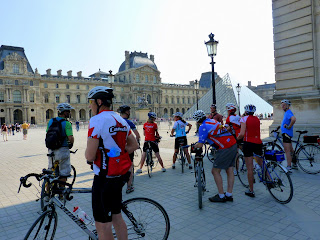 Early the next morning the entire group left the hotel and cycled down the road to the city centre. The traffic was light and we had a great ride through the streets of Paris. Past the Eiffel Tower, around the Arc de Triomphe and down the road to the Louvre. We had a quick coffee stop and then it was back on the bikes along the River Seine,and back to our hotel. Ricardo, Miles and Gergo gave us a short briefing on the low-down of what to expect on the tour in the following days. Everything seemed to be extremely well-organised so it appeared that I was in for a relaxing month ahead. I found a bike shop and invested in a helmet and bike lock and was as keen as everyone to get out on the bike, and see what Europe was really like.

At last I was back on the bike and could not have been happier. We left Paris in a group ride and I felt a little silly as all my fellow cyclists were dressed in full cycling gear, and there I was in my usual shorts, sandals and T-shirt. It was a very easy ride through the French countryside and past very tiny villages. We stopped for lunch under some trees before we did the last few km’s into Chenoise. We arrived at the campsite in Chenoise quite early and everyone fiddled with their tents and gear. The campsite was on a farm in the countryside with a very French-looking farmhouse and loads of horses, donkeys and ponies. 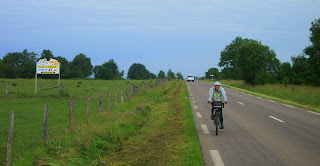 It got light really early and the farm animals made sure that no one overslept. After a good breakfast we were ready to cycle down the road. At Provins we turned off the road to explore the old walled city with its castle and old houses. Then back on the road through the countryside, past vast farmlands, poppy fields and small villages. These villages were really tiny and extremely French-looking with its stone- built houses and windowsill flowers. Things are so organised and orderly in France that from time to time these villages resembled ghost towns, as not a peep came from any of the houses. Even the “riot” in one of the small villages was so peaceful it resembled a well-rehearsed play.

On arrival in Troyes I was pleasantly surprised to find an extremely comfortable hotel waiting for us. What luxury I was enjoying. Troyes is known as the historic capital of Champagne, and I was looking forward to some really good stuff. 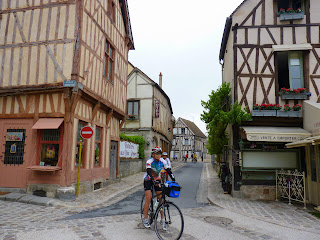 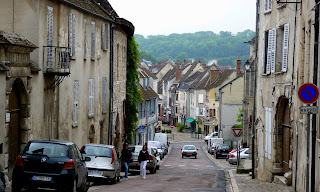 We spent the day in Troyes, famed for its wood-framed houses and the Cathedral of St. Peter and St. Paul. Word also has it that The Order of the Knights Templar was founded here in 1128 by the Council of Troyes. I was keen to find out more about this mysterious history. Unfortunately however, I met no one belonging to the Order but found loads of Champagne and thoroughly enjoyed the day in Troyes. 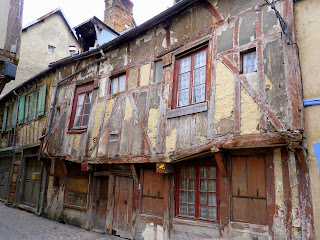 After a hearty breakfast at our fancy hotel we were all ready to get on the road. A nasty surprise awaited us as the (locked) bicycles belonging to my fellow South Africans, Evlyn and Alf, had disappeared from the hotel’s parking garage. I now have the greatest respect for them as they took it all in their stride without making a fuss. Off they went to the bike shop, bought two new bikes and got on the road.

The rest of us set off on a beautiful ride through the countryside with numerous stops for coffee and pastries. Although fairly cold, it was an enjoyable day out on the road. Needless to say that when Evlyn and Alf arrived at the campsite on their new bikes, it was to great applause for their strength of character and the way they handled the whole situation. A good few bottles of red wine were consumed, partly due to the cold and partly to celebrate the new bikes. At 3 Euros a bottle, we felt no guilt in opening a bottle or two. 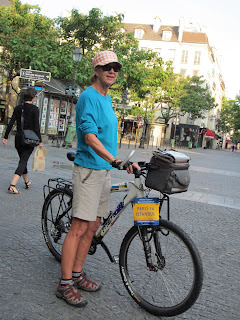 I was reluctant to get out of my warm sleeping bag as it was still bitterly cold in the morning. The sun threatened to come out from time to time but to no avail. At lunch we had some awesome cheese and bread (something there is quite a good variety of in France).

Plombieres turned out to be a fascinating place with narrow straight-up houses built on the mountain side and known for its thermal baths. After a cup of coffee in the village we cycled the 2 km uphill to our campsite and reached it just in time before the rain came down. 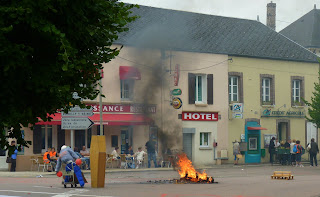 We left our campsite in freezing cold weather and sped downhill into the misty valleys of France, past vineyards and quaint villages. One long climb brought us to a ski resort (fortunately it’s summer) where we had lunch and coffee in one of the coffee shops. We sped downhill for about 18km to the small village of Munster where we arrived with frozen fingers and toes. Two people in our group got half-lost but fortunately found their way back onto the right road again.

We arrived at our campsite fairly early and had enough time to wonder through the streets of Munster, eyeing the storks nesting on the rooftops. At camp we (once again) had an excellent supper, accompanied by loads of local wine. 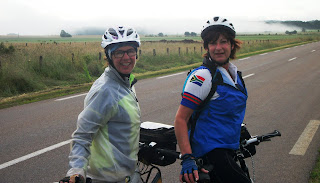 Shortly after breakfast I set off with Alf and Evlyn on a beautiful ride past stunning villages. A short ride brought us to the Rheine River, where we crossed into Germany and immediately found a cycle path. We cycled along through farmlands and the difference in architecture was immediately visible.

Our hotel in Freiburg turned out to be very fancy. I was rather ill-prepared for such a fancy place and I tend to feel half claustrophobic in a room where one can’t open the windows. That comes from living in a tent for too long - I can’t even enjoy the good life anymore. I shared a room with Alice (from Canada) who turned out to be a very strong cyclist. She did not however feel well at all and was in bed very early that night and had no problems with the claustrophobic room.
Posted by Leana Niemand at 2:04 PM