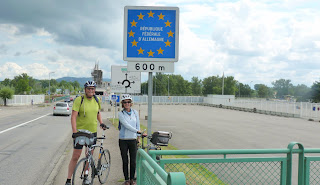 Shortly after breakfast I set off with Alf and Evlyn on a beautiful ride past stunning villages. A short ride brought us to the Rheine River, where we crossed into Germany and immediately found a cycle path. We cycled along through farmlands and the difference in architecture was immediately visible.

Our hotel in Freiburg turned out to be very fancy. I was rather ill-prepared for such a fancy place and I tend to feel half claustrophobic in a room where one can’t open the windows. That comes from living in a tent for too long - I can’t even enjoy the good life anymore. I shared a room with Alice (from Canada) who turned out to be a very strong cyclist. She did not however feel well at all and was in bed very early that night and had no problems with the claustrophobic room. 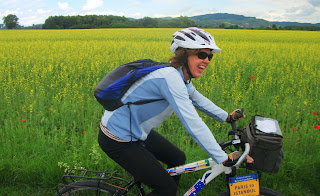 We spent the day in Freiburg (situated on the edge of the Black Forest) - a very charming village with cobblestone streets, trams, pavement restaurants, street musicians and plenty of old buildings. Kids were floating their boats down the water furrows and everybody was out enjoying the sunny weather.

Just by looking at the variety of beers available, one could tell that we were definitely in Germany. We wasted no time in sampling the local brews. There was also no shortage of cuckoo clocks, as theyir originate is very much from this part of the world. I was amazed at the number of bicycles in town - there were literally 100’s of bicycles and just about everyone seemed to travel by bike. 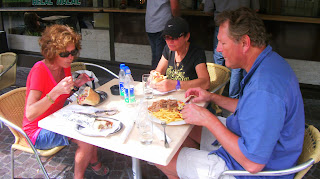 We had an amazing breakfast spread, after which we saddled up and cycled through the village of Freiburg. The road led us through a part of the Black Forest with amazing scenery and small villages. Dense forest lined the small road we cycled on and a musty wooded smell accompanied us all the way. The wood business is in full swing here and most houses are therefore timber homes. The ride was not without the customary climb up a hill or two, but also came with some really good downhills.

Donaueschingen is the official start of the Danube River and sits at a surprisingly low altitude for such a mighty river. This is also the start of the world-renowned Danube cycle trail. We cycled along the trail for a few km before reaching our campsite at Pfohren. The campsite was packed with other cyclists and I met a very interesting couple (Tamar and Keith) from the UK) cycling on a tandem recumbent bicycle. Keith even gave me a “lift” around the campsite, quite an unusual experience, but one I think I could get accustomed to. 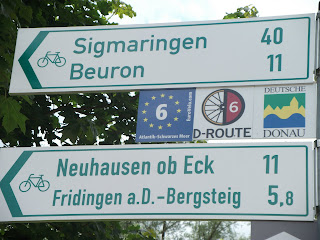 We had an excellent ride along the Danube cycle way and experienced our first sunshine on the trip. The path is very popular and we came across many families (with small kids) cycling along the path. The cycling was easy and followed the river on a dedicated cycle path.

We passed castles, forests, villages and stopped numerous times for coffee along the way. It was a very social ride and everyone ambled along nicely, without any rush to get to the campsite.

Miles is an excellent chef and once again cooked up an amazing meal. A drizzle set in and sent us to our respective tents quite early. 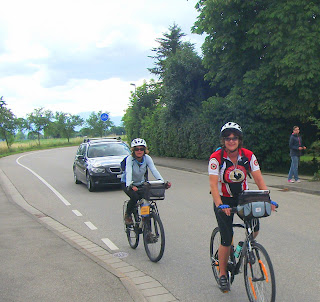 The Danube cycle way is a bicycle trail along the Danube River (as they call it here). It runs from the source at Donaueschingen to its mouth into the Black Sea. It is a dedicated cycle path for most of the way and the terrain is far more varied than I had expected. We crossed the Danube several times as the path followed the river in an easterly direction. What an absolute pleasure to amble along a dedicated cycle path!

We arrived in Ulm, after stopping many times for coffee and pastries. That evening we all took a walk into town, looking for a proper German restaurant. We had no problem finding one and pigged out on Wiener schnitzel, sauerkraut and Swabian noodles, washing it all down with the local brew. Delicious!! 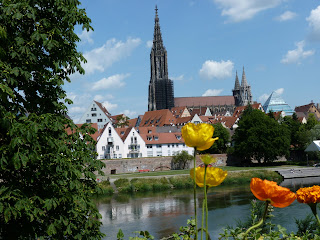 We had a rest day in Ulm and did the normal rest day chores i.e. laundry, internet etc. Ulm is known for being home to the church with the tallest steeple in the world, and it is also the birthplace of Albert Einstein, so there was plenty to explore in this very interesting city before setting off down the river again. 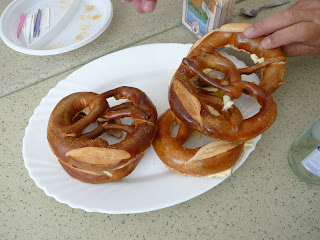 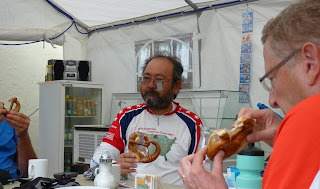 There is nothing like a breakfast buffet for a cyclist! We filled our stomachs from a large spread of fruit, cereal, bread and cheese before ambling down the Danube again.

We must have impressed the owner of a coffee shop with our “Paris – Istanbul” bike signs, as he offered us freshly baked pretzels, which came out the oven piping hot a few minutes later. He also generously offered us a sample of the local sausage before we set off through the forest again.

Although the path is clearly signposted, we still managed to pick (I think) the wrong route. Not that it made any difference - all the routes are scenic and you eventually seem to land up on the one you are looking for. 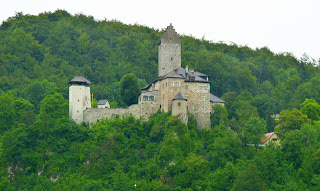 Everyone seemed to be up early in the mornings due to our early nights, so there was no sleeping in. I however seemed to be rather slow at the getting up thing.

After breakfast we all set off together but soon the group split up and people did their own thing along the way, taking photos, drinking coffee or sampling the local cuisine. Everyone seemed to be enjoying themselves as our days rolled nicely along and people got into their own stride. The weather however did not want to play along and it drizzled for most of the day. The town of Eichstatt seemed rather interesting but I kept going as by that time I had lost the rest of the group and it was drizzling. I enjoyed the ride through the forest on my own and arrived at camp fairly early.

Soon the others arrived and tents were pitched in the constant drizzle. Fortunately the showers at camp were piping hot and the rain abated as the evening wore on. The cold seemed to encourage the consumption of an unprecedented amount of red wine and chocolates! The red wine fueled in-depth discussions of the worlds energy crisis. As with most good discussions, we all went to bed content that we had solved the world’s problems. 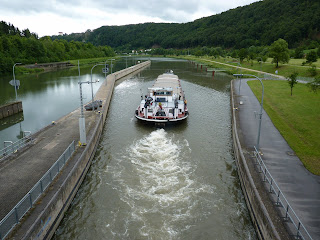 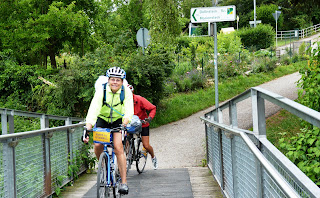 In a constant drizzle we continued down the cycle path, which also meant that we had a good excuse to stop for coffee and pretzels. It was once again such a pleasure to amble along past all the small villages, through forests and past farmlands. We watched barges maneuvering through sluices and slowly moving downstream.

Somehow I managed to miss the lunch spot but found myself on a nice cycle path along the river. So I continued downstream until I reached the famous Regensburg where we had hotel accommodation. This felt like the easiest cycling I had done to date - downstream on a cycle path!! What an absolute pleasure, I could get soooooo used to this!! That evening we all went out to a German restaurant again so it was back to schnitzel, sauerkraut and Swabian noodles - yummy!!

Regensburg is a fascinating town with a medieval center which has been declared a UNESCO World Heritage Site. The old town is packed with old houses, churches and narrow cobblestone lanes. It is apparently the only intact historic city in Germany. The stone bridge over the Danube River was built between 1135–1146, making it a pretty unique bridge. 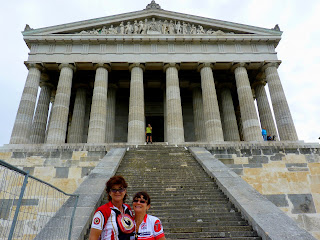 It was a short but delightful day on the road. Soon after we left, we stopped to inspect a very Greek- looking building, the history of which is still unknown to me. With it being such a short day, we stopped even more than usual for coffee and pastries.

Chris was the only racer in the group and normally arrived at camp hours before anyone. Francois (from Canada), Michelle (New Zealand) and Jacky (Australia) are also strong cyclists and normally set a good pace. Barry, Marion and Alice are also experienced cyclists and so were normally right on their heels, with the rest of the group trailing far behind. 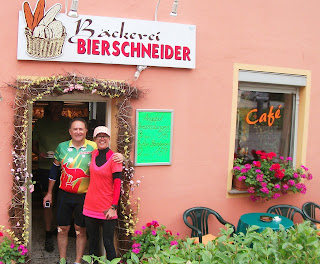 Our last day in Germany arrived and at last the sun came out. We had a fantastic day on the road, except that John (from Canada) had an accident and had to be taken to hospital to have his leg seen to. Fortunately Barry and Marion were there when it happened and could attend to his injuries before the staff arrived with the van to take him to the hospital. I can’t think of a better couple to have with you when something like this happens as they must be the most caring and compassionate couple around.

We stopped for coffee; we stopped for lunch (no lunch truck today) and stopped for coffee again!! There was no rushing and eventually we cycled on to the famed Passau. Our campsite turned out to be extremely picturesque with good showers. Supper was excellent (again) but then the rain came down and sent us all rushing for cover. A few bottles of red wine helped ward off the cold. 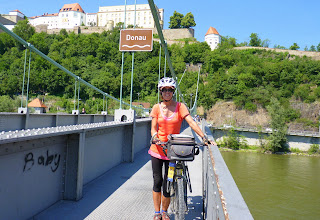 Posted by Leana Niemand at 2:23 PM