An unexpected turn of events sent me to Europe. Usually my route takes me on a continuous path from country to country. I was very excited to make the major leap from South America to Europe. My struggle for a Schengen visa forced me to book myself onto an organised tour. I was therefore in the fortunate position of being able to cycle with a group of cyclists for an entire month!! Not only would I be lucky enough to have my panniers transported and food provided, but I would also have loads of company. There’s always a first time for everything!

I was itching to get back on the bike. A whole month of doing zilch except eating, drinking and smoking had made me very restless. I was ready to zoot off to Paris where I would meet the rest of the cycling group.

I hurriedly piled all my worldly possessions into a single bag (except for the bike, of course). I’m quite convinced that I must be one of a very small group of people: those who can fit into one bag all their earthly riches. I was getting slightly nervous. The company I was going to be cycling with clearly stated that we could only bring 2 x 90 litre bags. All my stuff fits into one bag (mainly because I only have one bag). That made me wonder what the heck the other people were taking?? I guessed I would find out soon enough what should have been in those bags! Damn that bag was heavy! OK, maybe I should have taken two bags…

I said my final goodbyes and was in bed early, ready for my early morning wake up call and flight to Paris 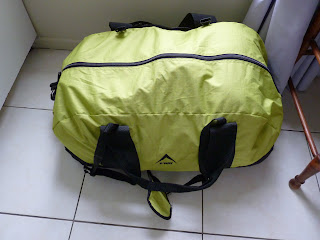