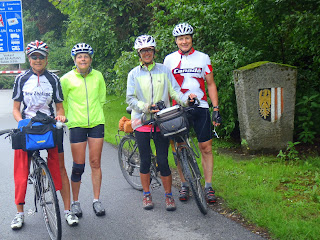 Edna, Sterling, John, Evlyn and Alf took the boat on the Danube from Passau to Linz, a particularly scenic part of the river. I kind of felt sorry for John as he really wanted to cycle but with his leg being all stitched up, it was just not a good idea. John is a university professor from Canada and he is such a wise and kind man, and the last person in the world one wants things like this to happen to is him. The rest of us saddled up and set off down the river to the Austrian border. Soon we reached a rather small and faded sign indicating the border between Germany and Austria - quite disappointing.

I cycled with David and from time to time met up with the others as we stopped for our usual coffee breaks. 6 km before Linz, we spotted the river boat carrying our friends and we waved frantically to attract their attention. We then proceeded to race the boat to its mooring point, waited for them to disembark and then we all cycled the last few km to camp together. No sooner were our tents up and the dreaded rain came down again.

It turned out that it was a public holiday in Austria and all the shops were closed, making it impossible for Miles to pick up enough ingredients for supper. The result was that we all ate in the restaurant that night. 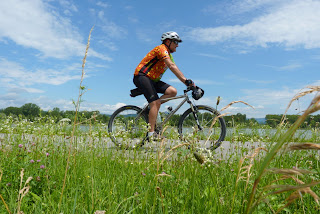 
We followed the river east and turned off to visit Mauthausen concentration camp. What a depressing site! Soon after the visit we had our first coffee stop, after which I set off and cycled downstream with a strong tail wind, never to see the rest of the group again that day.

There was no doubt that we were in the land of Heidi and the Sound of Music. The scenery was stunning and it was a pleasant day on the road as the rain held off and the sun peeped through the clouds.

It was Evlyn and Alf’s final day of riding as they were due to fly back to South Africa the following day. Bikes were taken apart and boxed, and tents rolled up and stuffed into the bike box. They booked into a B&B for the night and I was sad to see them go as I quite liked them.

At camp John’s leg was cleaned and redressed. Fortunately Sterling is a medical doctor and kept a beady eye on the operations. 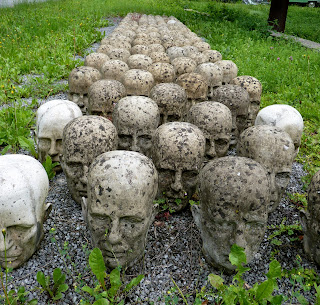 It was a particularly scenic ride past vineyards, cherry trees, apricot plantations and small villages. These tiny villages are steeped in history, with cobblestone streets, quaint houses and old churches complete with human remains! There seem to be castles on each and every hilltop, some dilapidated and some still in good nick.

I once again lost the group and enjoyed a day of riding on my own. Although it’s nearly impossible to get lost in this part of the world, some people still managed to lose the official path and land up on a really muddy road. We eventually all arrived at our hotel in Vienna and were all lookingall looking forward to two days of rest and sightseeing in Vienna.

Vienna, or Wien as it known here, is the capital of Austria and by far the largest city in the country. We could not have picked a better time to arrive in Vienna as the Danube Island Festival was on and the island was packed with bandstands, food stalls and all kinds of entertainment.

I wandered around the city eyeing the huge Ferris wheel but could find no one to join me, so instead I enjoyed numerous cups of their famous coffee. Vienna is also the home of great music and a person does not have to go far to find piano makers, opera houses, and other great musical shows.

The old and the new seem to blend effortlessly in Vienna. Hectic city traffic, old fashioned looking trams and horse-drawn carts seem to co-exist quite happily. For that matter, so do Armani, Strauss and Mozart! Coffee shops and Bratwurst stalls abound, and one can find opera tickets and tickets to Mozart concerts on about every street corner.

Vienna has enough art nouveau buildings to satisfy anyone for a lifetime; Otto Wagner must have been a very busy man. All in all, a fantastic city with bicycle lanes, large parks, pavement cafes, music houses, opera theatres, coffee shops - and all this situated on the banks of the famous Danube River. It’s no wonder that it is such a touristy place.
Posted by Leana Niemand at 6:29 PM