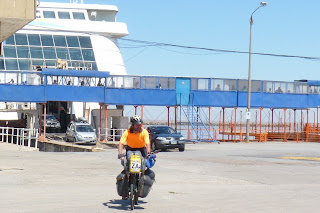 We were up rather early to start packing and get the bikes out of the storeroom where they were resting for the past 12 days. Then it was off to the ferry terminal. We took the slow 3-hour ferry instead of the more expensive 1-hour boat. We could just cycle on board as our ferry was a large comfortable car-carrier, with food outlets and even a duty-free shop.
It was smooth sailing across the muddy Rio de la Plata all the way to Colonia, Uruguay where we arrived in the heat of the day. Colonia dates back to 1680 and is now a Unesco World heritage site. We cycled past the old city gate, through the old city with its cobble stone streets and down to the old harbour. Eventually we headed for the local campsite. We were a little shocked at the price and the quality of the facilities, so we decided to wild-camp from then on. 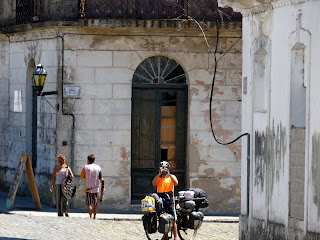 Our first day on the road in Uruguay turned out to be very pleasant. It seemed more lush, green, and humid than in Argentina. Just 56 km down the road we stopped at an ATM to draw money and bumped into a woman, Jo, who lives just down the road with her South African daughter and son-in-law. We were invited for tea and ended up having supper there and camping in their garden for the night. Jo, Abigail, and Andrew, together with their small child Lucy, sailed the South American coast for a couple of years. With Abigail being pregnant again they then settled in Uruguay for a while. Now their 3-month old baby Sarah, is the picture of health and seems quite pleased to be Uruguayan. 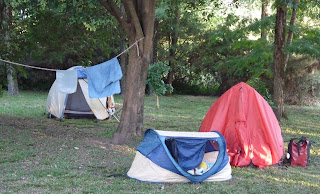 We reluctantly left our comfortable accommodation and headed East towards Montevideo. A headwind picked up and it was a bit of a battle for the rest of the day. We stopped a few times for a drink and a bite – including snacks which Jo gave us the previous evening.

In the late afternoon, 33km From Montevideo, we spotted a fine petrol station with lawns out back, a shop, and toilets, so we pulled in for the night. 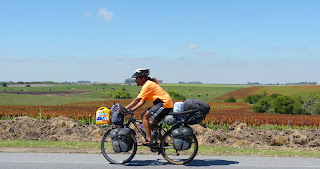 It was an easy ride into the capital, it’s a fairly small city (population just over one million) and it was easy to find our way around. We headed straight for the old part of the city where we found some reasonable accommodation.

Situated on the Rio de la Plata gives Montevideo it a bit of a holiday feel and people seem to be very relaxed. Mate, like in Argentina, is still the most popular drink and one can see locals with flask clutched under the arm and cup in hand wondering the streets of the city.

The historic Cuidad Viejo area is a pleasure to walk around as most of the old buildings have been renovated and reminds a bit of Eastern Europe. Plenty of pedestrian malls with street cafes and lively squares with craft markets and statues made me want to linger.

Montevideo has a 20km long beachfront and we cycled along it together with joggers and other cyclists. Once out the city limits there were plenty of beaches and small villages along the way. The wind picked up as usual and be battled along until we reached Piriapolis. We cycled on to Laurence and Elisa’s house where we camped in their garden for the night (Andrew from Colonia Valdense knows Laurence and contacted him in this regard).

The next morning we got wind of an evening braai and stayed for the party. What a delightful mixture of people, 4 South Africans, 2 Canadians, 2 Americans, 1 English, 1 Spanish, 2 Swedish, an Irish and only one Uruguayan!! It was a true Uruguayan asado with more meat than anyone could eat. These people know how to party.

Due to our late night we had a rather slow start and after scoffing the leftover food we reluctantly cycled off along the coast.

We soon reached Punta del Este, one of South Americas most popular and expensive coastal resort towns. Four huge cruise ships where anchored in the bay, and the rich and famous were doing their thing on the many beaches around the town. We could only look and then pedaled off quietly up the coast until we found a campsite, a safe 10km distance from the glitz and glamour of Punta.

We pulled into the campsite on a Sunday afternoon, thinking that the weekend camping crowd should be moving home to make space for us. Mistake, as the next week is Carnival holiday and the place is packed full – but we did find a site and are now surrounded by mate-drinking campers who are continually tending their asado’s fires (that’s after siesta, of course).

We’re slowly getting into the Uruguayan style of life, going to bed late and rising late. We got on the road at 12h00. We encountered a rather strong-head wind but battled on to Rocha town. This smallish town was a bit of a surprise as it is rather old with cobblestone streets and rows of old semi-detached houses where people still go around in horse carts. A local lady stopped us and offered us accommodation in one of these old semi’s (at quite a steep price – it is carnival holiday after all). The tiny low-ceiling cottage had 2 bedrooms, lounge, bathroom and kitchen, as well as a courtyard where we stashed the bikes - and we lived as if it was really our house. By the time we’d had some beer and we’d scoffed the good pasta which Ernest cooked it was 01h30 – way past our bed time.

We washed the leftover pasta down with some coffe, and it was afternoon by the time we handed in our key. The wind was even worse than the previous day and we had no intention of going very far. The road continued to be rather hilly and it was up and down into the wind all day. A friendly Uruguayan man stopped and offered as a lift in his truck - he looked rather perplexed when we thanked him for the offer and refused.

We cycled past farmlands and the ever present pampas grass until we saw a sign for camping 4 km off the road (about 10 k’s before the town of La Esmeralda). The sign promised a restaurant, pizza place, and so forth – so we flew down the gravel road dreaming of some luxury. After 5 km we found a rather rustic place amongst the sand dunes (luckily there were some trees to break the wind, and after helping each other to push our bikes over the dunes to a suitable site, we felt that the place may not be all that bad after all).

We pushed our bikes through the thick sand until we reached the safety of more solid ground and headed for the Brazilian border. Although it was still windy the road flattened out and we cycled past large grazing fields and wetland areas. Along the way we met Jorge, from Spain, who has been driving his little vintage Citroen all the way from Spain via Asia, Australia, and the South of this continent - very much along the route we’d cycled.

We cycled around this smallish place, endlessly in search of an acceptable room, and in the end we found a cheap ground floor room in one of the back streets.
Posted by Leana Niemand at 5:19 PM