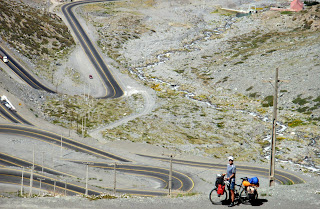 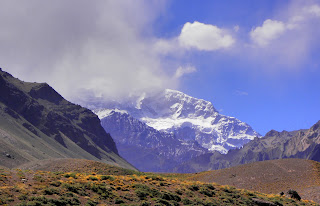 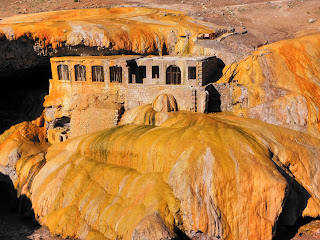 Three years and 10 months on the bikes! All day long the road zig-zagged up the pass. Although the gradient was acceptable it was still a steep and dreadfully slow 22km climb up the pass from where we’d spent the night. Roadworks along the way also caused more long delays. Eventually we reached the tunnel at the top of the pass and the authorities were kind enough to give us a lift through the 3km long tunnel. Once on the other side it was still 18km to the customs office. We flew downhill past the small settlement of Las Cuevas with just a few timber restaurants and a strong smell of lentil soup. Then it was onto the small touristy village of Puente Del Inca where we found a basic campsite. At least we had a sight of Aconcagua from the road, the highest peak in the America’s (6 960 m). Ernest cooked supper and then it was an early evening for me. Puente Del Inca has the most amazing scenery with high mountains all around which turned all colors of the rainbow at sunset. In addition there was a natural stone bridge across the river which has turned a lovely orange color from the sulfur spring waters running over it. The remains of an old spa were located directly under the bridge and were slowly turning the same color. 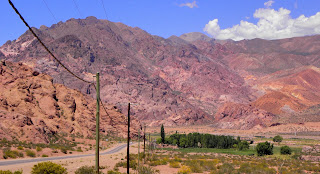 Ernest had some work to do on his bike and it was midday by the time we finally left. We cycled past Cementerio Andinista a small cemetery for climbers who died an Aconcagua. Then past Los Penitentes a well-known ski resort, now all boarded up (because it is summer and there is no snow). The pinnacles around the town are supposed to resemble a line of monks but I looked and looked but could see nothing that resembled a line of monks. Then it was a long mostly downhill run to Uspallata. Unfortunately we had a headwind all the way which made us pedal even on the downhills. The views were sublime and it is no wonder the film “7 Years in Tibet” was shot here. It was a stunning ride and we stopped many a time to try and capture the beauty of the surrounding mountains but to no avail. We had a scary moment when a large truck and trailer overtook us on the downhill and burst a tire right next to Ernest (who was ahead of me). I got quite a fright but things could have been much worse as pieces of tire flew everywhere and the truck swerved madly from side to side. Soon we reached Uspallata and what a surprise it turned out to be. It is a true oasis of poplar trees in this absolutely barren mountain landscape. Uspallata is a small town but with a campsite and all the necessary shops. 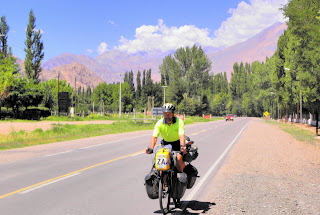 The party next to the campground in Uspallata carried on through the night and little sleep was had. It was 12.30 the following afternoon by the time we finally left. Again the road followed Rio Mendoza and the scenery was as spectacular as the previous day. Although it was mostly downhill there were still plenty of uphills and narrow tunnels as we followed the river. This is also a popular rafting destination and we could see many tour operators carting people to the drop off point for a raft down the river. Again a headwind picked up and I was kind of sorry that we’d left so late. However, we reached Potrerillos early and found a campsite close to the lake with beautiful braai places amongst shady poplars and other trees. Ernest had to have a braai in Argentina, and he bought a large chunk of beef and wood which he strapped to his bike, and that evening he was in his element just tending the fire.

It was a fairly short cycle to Mendoza, but first we had some solid hills to cross before going down into the valley. Once we reached route 40 junction the road widened and at least we had a shoulder to cycle on. This is wine country and we cycled past many a wine farm offering wine tasting and wine tours. Allthough Mendoza is a fairly large town it was an easy cycle into town. We found the accommodation frightfully expensive but still settled for a room in one of the hostels in the touristy part of town. It's high season and prices are at a maximum, the weather was however fantastic and in the high 20's.

Included in the hefty room price were bed bugs which, together with the disco next door, kept me up all of the first night. Fortunately the hostel had a nice garden with a swimming pool and some shade where one could relax during the day.

We decided to stay another day in Mendoza, as there were things to do like internet, etc. We also booked for the braai tonight (eat all you can) of course for Ernest as I haven’t changed my vegetarian status quite yet.
Posted by Leana Niemand at 6:59 PM