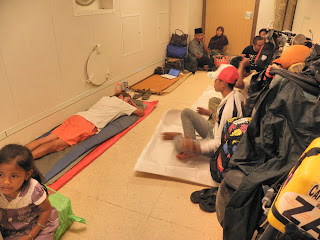 Eventually it was time to leave. The day dragged on, seemingly for ever. We had to be out of our room at 12h00 but the ship only docked at 3pm and left at 7pm. So, we sat around in cafes, walked around shopping centers and visited the old fort (again). At last we headed for the harbor where we boarded the already overcrowded ship (this was not the origin of the voyage, the ship does a weekly route amongst various Indonesian islands).

We found what we thought was a good spot for ourselves and our bikes in a passage close to the door where we entered the ship. However, soon other passengers also claimed their space in our passage and we could hardly move. The rest of the ship was similar, with people sleeping on the stairs!

The Indonesians must surely be the most tolerant people on earth. With the boat being that overcrowded, everything from going to the (soon blocked and overflowing) toilet to buying something at the shop brings along a lengthy wait in a long que. Those people (unlike me) don’t stand there grumbling, sighing, and rolling their eyes. In fact they remain friendly and chatty as if this is no problem at all. I truly admire them, even when our ship developed engine problems and we were left adrift out in the open seas, they did not lift an eyebrow, - they just carried on eating their instant noodles and playing cards, believing that the problem would be fixed in no time at all!!

In the meantime they seem to be constantly having a shower, and always smell as fresh as daisies; it was just the 2 foreigners being all sweaty and stinky. I have now discovered their secret. Sweet smelling flowers, being sold at the market, is placed in water and is then used for rinsing the body.

10 July - Arriving in Surabaya
A lot of rubbish is generated by so many passengers on a ship (meals and snacks are served in polystyrene containers, and most wrappers, etc. are plastic. This rubbish was collected in large plastic refuse bags and stored at the other end of our passage – but during the night the large side-hatch was opened and all that rubbish was unceremoniously dumped into the ocean!l I could not believe my eyes, after all that careful collection, what’s the point?!

We arrived in Surabaya, at around 22h00 (instead of in the afternoon, due to the engine problems). It took forever to get off the boat with our bikes and bags. We once again cycled in the dark into town to find a hotel. I was more than happy to be off the boat and into fresh air.

11 July - Surabaya
FIFA really did put South Africa (Africa Selatan as they say here) on the world map. Most people have at least now heard of South Africa. My impression is that many people still think SA is just a geographical term referring to the South of Africa. A common reaction is still, “But you are not black?” As someone asked today, “Where in South Africa, …..Nigeria?”

Ernest was still rather ill, so we stayed one more day. He refuses to go see a doctor, and because he keeps on cycling he has now also picked up a cold.

12 /13 July - Surabaya - Pasuruan - 67km
We packed up and cycled the relatively short distance in heavy traffic to Pasuruan. It was a short ride but better than just staying in one place. I seemed to have also picked up Ernest’s cold and suffered from a tight chest, blocked nose and headache. This is so frustrating.

The entire way was very congested, and it felt like we were not getting out of Surabaya. This must be guava country as all along the road they were selling guava and guava juice. A great drink to have as they put loads of ice in it.

In constant traffic we arrived in Pasuruan; found a very comfortable room (my favorite) an outside, ground floor room with a window and a veranda overlooking a central garden.

The next day both Ernest and I were rather sick and feeling worse for wear, we decided to stay in bed and only carry on the followed day. 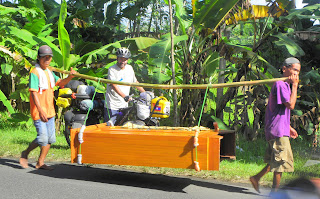 14 - July Pasuruan – Probolinggo - 41 km
We took it real easy and only cycled the short distance to Probolinggo. Although a busy road, it was nice and flat with a bit of a tail wind, so we arrived early. I was keen to see the nearby volcano and decided to do that the next day. 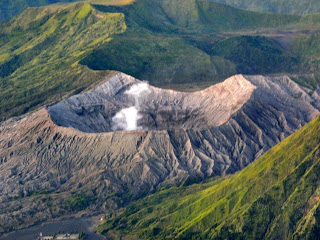 15 July - Gunung Bromo
I got up in the early hours of the morning, left Ernest in bed, and headed up the mountain to see the sunrise. Gosh, I have not seen so many tourists in a long while. Where did they all come from? I could hardly catch a glimpse of the sunrise with all those people at the view point! It still remained quite a spectacular site. Mount Bromo with its smoking cone and smelling strongly of rotten eggs, is situated in a vast caldera and surrounded by various other craters.

I climbed up to the lip of the crater to see what was down there. Not much just a smoking hollow! Then it was time to head back to the room where Ernest was still semi-comatose under the covers. 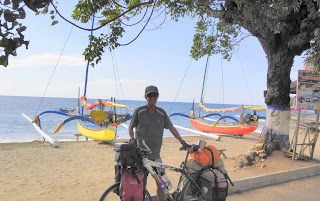 16 July - Probolinggo – Situbondo - 102km
A great day on the bike, as the road was flat and there was not as much traffic as expected. The road hugged the coast for most of the way and although not a beachy area, more like mangrove swamps, it was great to be next to the ocean.

I love easy days!! Both I and Ernest felt a lot better so we enjoyed the day, all we needed was a tail wind, but that was asking for too much!
Posted by Leana Niemand at 7:01 AM