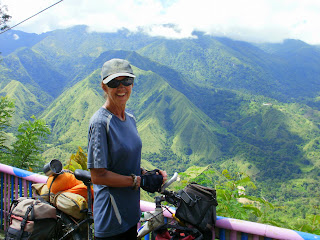 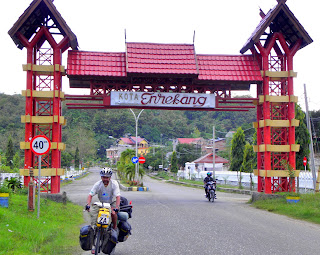 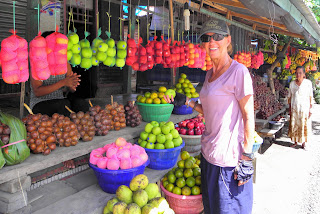 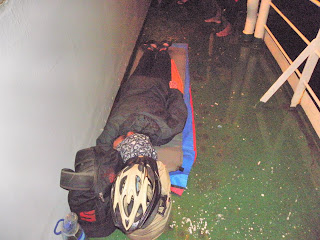 Dead tired we arrived in Pare-Pare at 7h00. Once off the boat we headed straight for a room where we could have a shower and a sleep. First we had to find a bike shop and a new tyre for my bike as a huge bubble appeared along the wall of the tyre. Ernest, still feeling unwell, did all the work and changed my tires for me.

Sulawesi is a twisted orchid shape Island with four mountainous peninsulas sprawling into the sea. Needless to say there is little flat ground around. The road between Pare-Pare and Enrekang is probably the most flat of the lot. We headed north on a gently undulated road until we reached Enrekang.

Both the culture and architecture here seems to be different to Java and Kalimantan. Traditional wooden houses lined the road, orchids seemly growing wild along the road and amazed and friendly locals are keen to inspect us as soon as we stop. At every stop they appear from nowhere and have no shame in staring at and even touching us (they must wonder what a white skin feels like).

Gosh what an uphill day it was. We climbed up to the highlands with stunning views of the valleys and rivers far below us. It was a rather slow day as we stopped numerous times for water and to admire the views and the interesting traditional houses along the way. Once we reached the area of Tana Toraja things became even more interesting.

Traditional houses with boat shaped roofs, rising in front and at the back, is a common site, most also have a richly decorated barn in front,

Although it was Saturday night, we were lucky this time and found a room in Makale at the 3rd local hotel we tried. Although we were not far from Rantapao (tourist centre of Tana Toraja), it was getting late and we were rather tired (Ernest was still suffering from the illness which he picked up in Borneo).

It was a short and easy ride to Rantapoa. We took the opportunity to stop at Londa, a small village with some fascinating burial caves. One can even go inside the caves where old coffins are scattered around, exposing skulls and bones. Very gory, how can these people find any rest? Above the cave is a balcony with a row of tau tau (life size carved wooden replicas of the dead) sitting all dressed up in fresh clothes watching their graves. We found more caves at Lemo where tau tau is sitting high up on a sheer cliff face.

Once we reached Rantepao, we booked into a rather expensive but comfortable hotel, in fact we stayed for 2 nights, doing nothing just laying around and watching football on TV. (Aslo waiting for Ernest to recover from his illness).

Another remarkable day on the road. We cycled through more authentic villages with colourful rice barns. At last we reached the long awaited downhill. The road was in rather poor condition and washed away in many places, parts so narrow that I wondered how the trucks and busses make it past those detours. Thick clouds and rain hung over the mountain top and made visibility rather poor as we descended down the mountain. We reached the town of Palopo fairly early in the pm, and booked into a room close to the central market.

At last we reached a level road! (only slightly up and down at times). What a pleasure it was to cycle along and just enjoy the ride. We could see all kinds of produce being dried along the road. The whole range was there, coco beans, coffee beans, fish, rice, sea weed, vanilla and the ever present cloves. The smell of cloves will now probably forever remind me of Indonesia.

We spotted a Hotel sign indicating a beach hotel, and booked into what was once a very nice resort hotel – right on the warm tropical ocean -but it has since gone to the dogs. The hotel is situated right on the ocean with all the facilities, but no one there. The facilities were not what it used to be but the location was fantastic. There was a small fridge and TV in the room - and despite the arrangement of satalite dishes there was only one channel on TV. (I later found the TV remote in the bed). Soon the word must have gotten out that two foreigners were in their midst, and the townsfolk arrived to come and have a look while we were still unpacking outside.

Another excellent day on the road, gently undulated and with nice views. We picked up a bit of a tail wind and carried on cycling past more colourful villages. The Indonesians do like color - from bright pink curtains to luminous green school tracksuits.

Just as we departed from one of our water stops, Ernest snapped his chain but fixed it in no time. In the meantime the lady from the house served coffee and cake. Kids arrived to check us out, and although shy they’re not timid. They just come to have a closer look at the two strangers.

The soccer world cup has really put South Africa on the map. Most people now have heard of South Africa, although they still find it amazing that we are white. When they hear where we from, they spontaneously brake into the “Wave your flag” song. How fantastic is that! I must admit it is a rather catchy tune.

After a breakfast of fried rice and chilies, there was no doubt that heartburn was going to set in soon. Ernest (still suffering from his mysterious illness which he picked up in Borneo) now seems to have a chest infection as well. He wisely decided not to cycle on to Makassar but to take a day’s rest in Pare Pare.
Posted by Leana Niemand at 10:32 AM