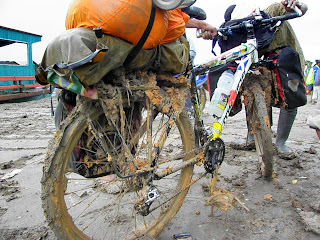 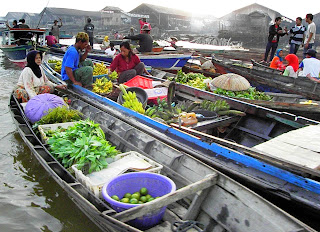 Twenty-two hours after sailing out of Surabaya we docked at the river port of Banjarmasin. We only had to cycle a few k’s into the city, and although it was dark we had no trouble finding our way and booked into one of the budget hotels. It was immediately apparent that it was going to be even hotter and more humid in Borneo than in Java. The last part of the ferry trip to Banjarmasin was up a large river, and from the ship one could see many wooden stilted houses over the water along the riverbanks.

I felt absolutely awful and spent the best part of the day lying in the room under the (not so effective) fan. It was boiling hot and the humidity was extremely high, just what one can expect being so close to the equator. Ernest found some tablets for my nausea which seemed to work quite well and by the evening I felt a whole lot better. We decided to stay another day, and I arranged an early morning river trip with Ahmed, a local guide. 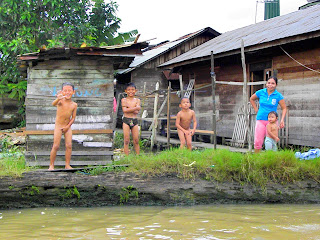 We were woken by our guide at 5 am (we hadn’t adjusted our watches to Borneo time – an hour earlier than Java). After cruising up rivers and canals in an open slow-boat we arrived at the very colorful floating market. We bought some fruit from the boat vendors, and on the return trip we stopped at the riverside “old market” for vege’s and made a nice potato salad that evening. (I still could not stomach any fried stuff). The markets are fascinating and a quick glimpse into the daily life of the local people.

Banjarmasin is a city with a maze of rivers and canals, and much of the population spend life in the stilted houses lining the banks. The waterways are not just for transport, but also serve as a toilet and a bath (swimming, laundry, and dishes are all done in the same water). Then they still fish in the river, gosh, I hope they don’t drink that water as well!! That sure will be enough to kill a person. The people are incredibly friendly and shout, scream and point us out to their kids, as we pass by. At times I felt as out of place here as an urang-utang would be on the streets of Cape Town. 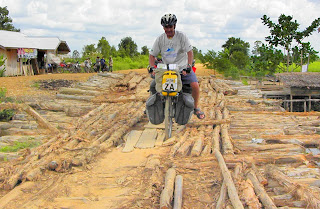 We decided not to take the main road, and left Banjarmasin along a narrow paved road following a canal with plenty of local life. In contrast to our suspect map, the road abruptly turned into a small gravel road which ran along rivers and canals and rice paddies. We could tell that there have definitely not been many tourists in this part of the world, as people seemed rather apprehensive of us.

The mother of all storms was building up around us, and our road had deteriorated to a footpath with no shelter in sight. Fortunately, just as the storm broke we reached the entrance road to a coal mine and sheltered in the security hut, with coal dust from the overhead conveyer belt showering down together with the driving rain. Later, in light rain, we proceeded along the unpaved mining road which soon ended. Before we knew it we were back amongst the rice paddies, and the rain had turned the track into an impossible clay pit. Slipping from side to side, my bike and feet were soon jammed up with the thick sticky clay. Pushing the bike was also impossible, and I ended up dragging the bike along, falling and slipping around in the process.

It seemed like an eternity before we reached a canal where a ferry took us across, and we were hopeful that conditions would be better on the far side. The locals helped us slide the bikes onto the ferry, and then helped us clean off the worst of the clay. As it was getting rather late we considered camping right there, but it was still raining and there was no shelter or dry land around (besides that, the mosquito’s were eating us alive. By the time we’d made up our minds to move on it was dark, and the friendly locals helped push us off through the clay for the first km or so (bikes caked with clay again!). By then the path had improved to simple mud, stones, and potholes, so we could cycle to some extent. It was tricky cycling in the dark and the rain I was lucky to have only one serious fall (luckily I didn’t break my arm again!).

A lifetime later 2 rather soaked and muddy foreigners slunk into the small town of Margasarihillir – much to the surprise of the locals. After looking around for a while we went to seek shelter in the (deserted!) police station. After a long while the police returned from their patrol (or dinner?), and allowed us to camp in their derelict back rooms. In fact, it took a while to explain to the police that all we wanted was a place to sleep (not a lift to the bus sation, or a meal, etc.). Ernest worked until well after midnight to wash the worst of the muck off the bikes. 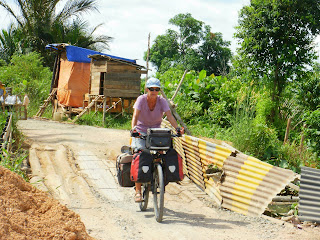 At last we were on a tarred road again, and I have never been happier. We cycled along the scenic narrow road, past villages and along a river to reach the small city of Rantau. What a fascinating country this is. We carried on past Rantau until we reached Kandangan were we found a hotel. I was in desperate need of a bath, and we spent the afternoon doing laundry, and cleaning equipment.

Now the skin is coming of the palms of my hands, gosh what’s next? It looks to awful, like athletes foot on one’s hands, this is so gross!! 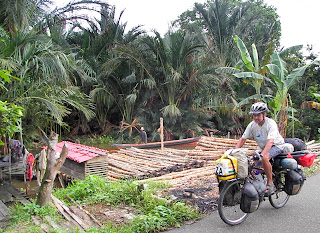 Breakfast seems to be included in the room rate – often something like fried rice and a boiled egg. Taking the weather into account it’s no surprise that duck eggs are the order of the day here.

In a constant drizzle we cycled along, and I was happy that we were on a hard topped road. Anything is better than that mud!

Holy Mackerel, those hills were steep. It just went straight up and straight down, what happened to good old zig zags? On top of every hill I first had to stop and get my breath back, then it was straight down and up again. Along the way we were offered coffee by locals at a roadside stall where we stopped for a rest – coffee was obviously being grown in this hilly area, and locals were drying the beans at the roadside.

We reached Muarakomam at around 16h30. It was a tiny village with just a few houses on either side of the road, a mosque and a market. We could not believe it when we spotted a penginapan (small local hotel). They sure knew that they had a monopoly as the price was rather steep for such basic accommodation.

Now that was a hard day! Gosh, it’s not that the hills are that long, only about 500m or so. But the gradient is insane, then straight down again, across a river and straight up again. So it went all day until we reached the top of the mountains. We basically fell straight off that mountain and flew downhill at break-neck speed. I was nearly a goner as I flew around a corner at high speed, while a truck coming up swerved out for a huge pothole and missed me by mere centimeters. I was a lot more careful after that!

We called it a day when we found a hotel in the small junction town of Kuaro - I desperately needed to rest my weary legs. 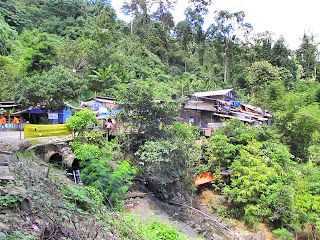 I was hoping that the road would flatten out in comparison to the previous days. Although it was not as steep, it was still hilly the whole day. We headed for the coastal city of Balikpapan on the East coast along a “good” road (according to the locals – still bumpy and potholed). As it had been on the previous day, it was hot and humid under a searing sun. I was sure that I lost half my body weight as the sweat just poured out of me!

By late afternoon we’d reached Pananjang on the Southern shore of a large estuary, with Balikpapan on the other side. We decided to take the car ferry across, but realized why many of the locals hire speed boats as the crossing took more than an hour. By the time we cycled off the ferry it was dark, and to our dismay we found that the ferry dock was some distance away from the city. So, we had some fun cycling another 20 km up and down steep hills on a tricky road in the dark, and then through chaotic traffic (every time we asked for directions it was another 5 km!).

By the time we reached town, I was exhausted, hungry, and thirsty – but that was not the end of the ordeal. It was late on Saturday night, and all the hotels in town were full! At last, after 10 pm we found a place, but had to wait for a while until the hourly customers had left and the room could be cleaned! What a long, long day it had been, and I was never happier to be horizontal – lumpy sagging mattress or not! 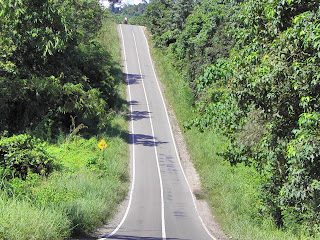 I wonder if people in SA realize just how much they are in the eye of the world right now. With the FIFA world cup their every move is watched across the globe. Here I am in Borneo and the streets are jam packed with traffic, going to the local park where a huge big screen is showing the football. It’s festive and food stalls are lining the streets, they should have blocked the road, as it was impossible to get through. Everywhere else in the city, people are sitting on the pavement in front of cafés and at local eateries, cheering on their chosen team on TV.
Posted by Leana Niemand at 2:01 PM

Good day to you. a real amaze trip with life time experience where no every have it..... Well done. During my Airforce day I used to organise a small Honda C 70 and C 90 from Kuching to Pontianak and around South Kalimantan.

Against my salute to you for the successful challenging trip.