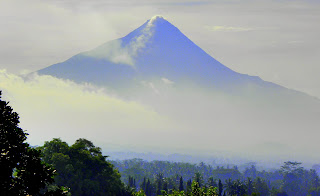 We were up and going before 8h00 again, ghosh what’s happening? It was a rather overcast day and soon it started raining, not that it’s a big problem – it’s nice to be cooled down a bit.

As we approached Borobudur the road became more hilly as we crossed over the flanks of two volcanoes. Jeepers, those hills were steep, but I huffed and puffed and made it to the top. From the turn-off to Borobudur it was a nice downhill run into the village where we planned to visit the well-known Buddhist temple on the following day. We had to search for a room in the pouring rain, as accommodation was hard to find due to the annual Buddhist Waisak Festival. Borobudur is the largest Buddhist temple in the world, and during this festival thousands of pilgrims and monks visit the site to celebrate the birth of Buddha and his teachings. Because the site is a popular tourist destination, it inevitably comes with all the tourist paraphernalia one can expect of such a place. 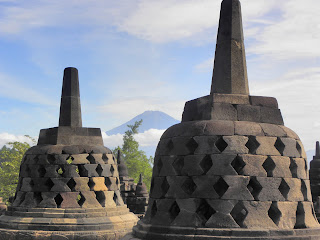 We were up early to visit the temple. Borobudur is an excellent example of Java’s Buddhist heyday. Constructed in the early part of the 9th century the temple was later abandoned with the decline of Buddhism in the area, and covered in volcanic ash by an eruption in 1006. The buildings were rediscovered in 1814 by Raffels, then governor of Java. To Buddhists the temple is a symbol of awakening and of a human’s journey to enlightenment. It sits on top of a small hill and overlooks the surrounding valleys and hills. From here one can also see the two nearby volcanoes, “Sumbing” and “Gunung Merapi” which appears in a near state of eruption (smoke spewing from the top and all - I’d better just behave until I’m out of here!).

Soon, however, hordes of giggling school kids arrived, (“small students” as the gatekeeper referred to them) all wanting to have pictures taken with me, and wanting autographs in their books which they apparently brought with especially for that purpose. I did the best I could, but there were just too many of them! So with the arrival of the heat and the school kids we retread back to our room for a lazy afternoon. 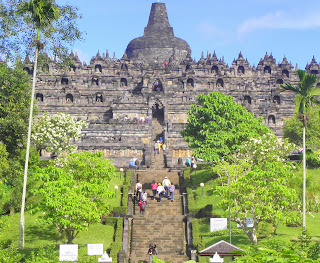 Shortly after leaving Borobudur we cycled past the nearby Mendut Temple where more Buddhist celebrations were underway. Police blocked the road off around the temple, but allowed as through on the bikes. Monks were chanting at the temple so we just viewed the scene from outside the fence.

I now realized why I thought I was stuck to the road cycling to Borobudur - it was uphill!! So it was a relatively short downhill run all the way into Yogyakarta city. Once there we discovered that there was not room for a mouse in town - everything was jam packed full, due to the celebrations. We cycled around for hours looking for room, but eventually we decided to head out in the direction of Solo, our next destination. Within about an hour we passed the temples of Prambanan, and fortunately we found a cheap room close by just before the rain came down. I decided to have a look at the temples the following morning - these seemed to be Hindu temples, hence the fact that we found accommodation so easily.

First thing in the morning I went to visit the Prambanan temple site – reputedly the largest and most beautiful Hindu temples in Java, built in the 9th century and mysteriously abandoned just after completion. Although seriously damaged by the 2006 earthquake, I found the temples to be very impressive. Then it was back on the bike.

It was a fairly flat ride into Solo, known as a very conservative city. It can’t be all that conservative as Ernest managed to find not only a beer, but also a tin of ham. The local Moslems probably think that he is going straight to Hell!

The next morning we decided to stay one more day. I handed in my laundry and we walked around town. We also bought some new dry bags at an outdoor store, at a fraction of the price we would pay for it in SA. Food for myself was more difficult to find as everything I saw had meat or egg in it. Eventually I ordered a spring roll at the hostel where we stayed and instead of a spring roll, got an omelette with veg inside. Ernest had to once again eat my poor order, and that after he already had to eat my breakfast omelette which came included in the room price. (I think he’s had enough of omelettes for a while).

After Ernest had 2 omelettes for breakfast (mine and his), we headed in the direction of Surabaya and found the road fairly smooth and flat. That also meant that the buses and trucks were going ten to a dozen and we had to be careful not to become road-kill in the process.

At last it seemed that we were (at times) out of the built-up areas and among some farmlands for a change. Cassava, rice and sugarcane were being grown in large quantities. All kinds of things were being sold next to the road, including tiny monkeys, fancy chickens, and colorful song-birds in cages.

I nearly got bitten by a snake which had been run over, and in defence it was striking out wildly in all directions. I did not spot it until the last moment, so I swerved away in a panic and nearly got run over by a truck myself -sjoe, that was close!

Otherwise it was a good day on the road and we put in a full days cycling, something we haven’t done in a while. Around 5 pm we pulled into the small town of Caruban where there was no problem finding a bed, food, and a beer - what more can I ask for? 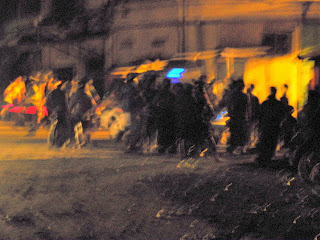 We were on the road early and headed in the direction of Surabaya, and until we reached the outskirts of the city we made good time as the road was fairly flat and not too congested. However, once we reached Surabaya the traffic became horrendous, and the last 15 k’s into town took hours - the last thing I feel like after such a long day on the road! (When Ernest decides what the destination is for the day, then there is no stopping him - and me like a small dog following in his wake, tongue hanging out and huffing and puffing for 160 km!). By the time we found a budget room close to the city centre it had been dark for some time, and I was totally buggered. I had a quick wash out of the mandi and then passed out on the bed.

The following morning we went to enquire about a boat to Kalimantan, the Indonesian part of Borneo. The first shipping company wouldn’t allow us to take the bikes along, so after I schlepped all the way to the head office of another company I was informed that the ticket office was elsewhere. We decided to leave it at that for the day, and rather cycle to the ticket office the following morning.

That evening a huge explosion rocked our street, scattering building rubble and broken glass everywhere – I nearly shat myself! The power was cut, and there was general pandemonium around the place with people running and sirens, etc. There seemed to be a strong military presence which made me think that it was something more sinister than just an accident. (Later I discovered that it was an accident in a gas-storage warehouse – it was even on the TV news, and apparently 3 people died). 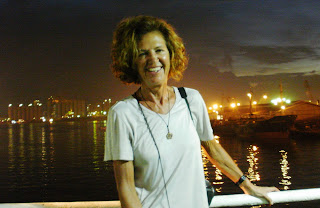 In the morning we packed up and cycled to the harbour where the friendly security guard at the gate went to the shipping office by motorbike to buy our tickets for us. I wasn’t feeling well, and as the boarding time was only later that afternoon, I parked myself under the nearest tree while Ernest went back to town in search of an Internet cafe and snacks for the trip.

Judging by the ticket price (R160 SA for a 24h00-trip) it sure was not going to be a cruise liner. I was suffering from severe diarrhea and certainly wasn’t looking forward to spending a long time on a crowded boat with a lack of toilets. The ticket included 6 meal vouchers so it seemed that they were expecting us to be on the boat for significantly longer than the predicted 20 to 24-hours. The fact that we only left at 20h00 instead of 17h00 made me wonder if we were going to need all those vouchers. However, once on board the friendly crew gave us an option to upgrade to a private cabin for a mere R40 each - what a bargain! (I quickly dug in my wallet en coughed up the money). There we were like two comfy rich tourists, even having meals served in the cabin while the rest of the rabble had to stand in que’s! The ship was a large car-ferry, so we could cycle on board and store our bikes below decks with the trucks and cars and motorbikes (R60 per bike). 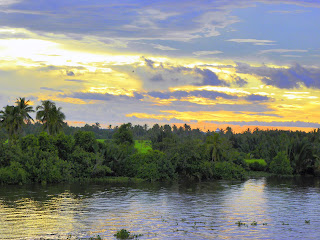 Twenty-two hours after sailing out of Surabaya we docked at the river port of Banjarmasin. We only had to cycle a few k’s into the city, and although it was dark we had no trouble finding our way and booked into one of the budget hotels. It was immediately apparent that it was going to be even hotter and more humid in Borneo than in Java. The last part of the ferry trip to Banjarmasin was up a large river, and from the ship one could see that a large part of the population lives in wooden stilted houses over the water along the riverbanks.
Posted by Leana Niemand at 7:57 AM