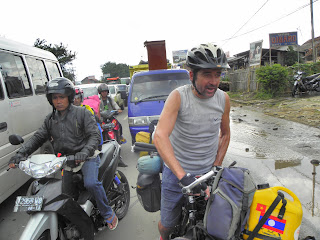 Ooh it was so good to be on the bike at last. First we cycled to the bike shop and had the gears on my bike sorted out, Ernest also got a new front derailleur, and after everything was fitted it was 12h30. We headed south-east along a terribly busy road, complete with traffic jams, busses, trucks, motorbikes and scooters. Not even on the bike could we always get past.

By 4.30 we did a mere 46km, dark clouds started heading our way and with big drops of rain falling we kept our eyes peeled for a room. We pulled into roadside village (in Java the whole roadside is a village) and asked around for a room. By the time we found a room we’d actually started heading back in the direction of Bandung. The room came without windows, a solid cover of mould on walls and ceiling, and a pile of cigarette butts swept into a corner. Rooms were obviously let by the hour as there was a constant coming and going of visitors, and judging from the sounds coming from the other rooms I think they all had a pretty good time.

With rain pelting down on the tin roof we cooked our noodles and drank a local “Bintang” or two. 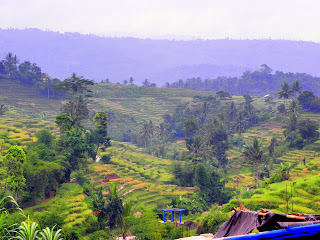 In the morning I was more than happy to be out of our cell and back on the road again. Things went well enough until we started climbing over the mountains when I could feel that I hadn’t been cycling for 6 weeks – Gosh, how quickly one looses fitness. In the afternoon the usual rain-storm arrived, driving us to seek shelter at a petrol station. After an hour the worst of the rain was over, but it was still twilight and raining, with parts of the road more like a river. I felt that this was a dangerous situation as we were not very visible, the road was narrow with flooded potholes, and the traffic was extremely heavy (as usual in Java).

I was becoming concerned about the gathering dark, but fortunately about 10 k’s before Tasik Malaya town Ernest spotted a hotel - there was no argument about pulling in there (fortunately the rooms were cheap and not too bad).

We cycled the short distance into the city centre, drew some money and then decided to stay for the day. Good thing too, as we did some laundry, high time as well, as I’ve been wearing almost the same clothes since leaving Cape Town 5 days ago. 18 May2010
Tasik Malaya – Cipatujah
78km

I was getting back into my stride and felt more at home on the bike and on the road than on the previous two days. We headed south on a much smaller and more quiet road to the small seaside village of Cipatujah. Although a hilly road, the scenery was sublime. We pedaled past small villages, rice paddies and dense forested areas. Once again we had to take shelter from the rain for a while, but for most of the afternoon it wasn’t much more than a drizzle. What a pleasure it was to cycle in the rain, at least it helps to keep one cool!

Soon we arrived in Cipatujah and found ourselves a nice little local hotel room close to the beach. We had hardly unloaded the bikes and the landlady brought us a bunch of bananas and later 2 huge plates of fried rice accompanied by the usual omelette, prawn crackers and slices of cucumber. At first we thought we were the only visitors in the village but soon a bunch of travelling salesmen (on motorbikes) arrived - that’s when you know that you’re staying in a local joint.

Later, just as we were nicely settled in, the earth started to rumble and shake! Clothes started swinging on the wall, the standing fan teetered back and forth, the water in the bathroom mandi (tank) was sloshing around, and even the floor tiles were moving back and forth!! Ernest and I looked at each other wide-eyed and I quickly put my shoes back on, just in case I had to run from our not so strong looking room (or a tsunami).

We had hardly calmed down again and a whole bunch of local policemen arrived (apparently to check our visas, etc.). They were obviously inquisitive about us and wanted to chat, but the language barrier was a problem and they didn’t stay long - at last we could go to bed. 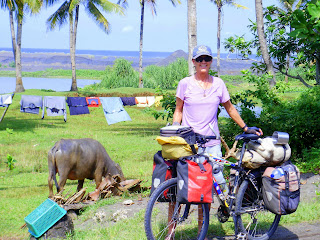 We left our fragile-looking accommodation and headed towards Pangandaran, the next biggish place on our map. We followed the smallest of coastal roads past fishing villages and more rice paddies. The road was mostly level as we followed the coast, what a pleasure it was! Some days, bicycle touring can be so much fun!

We took our time and turned off the main road. In the process we found the fishing village of Batu Karas, and decided to stay the night. The place is popular with tourists as it has a great beach and good surf as well. There is a range of accommodation, some fancy hotels and also basic “surfer dorms”. We found a nice cheap place attached to one of the beach restaurants, and it was even worth eating there instead of cooking our own food.

A short ride into Pangandaran,, apparently the main beach resort on Java island. There’s a lovely beach, hundreds of cheap hotels, a peninsula with nature reserve up the road, and not much else. Ernest was complaining of a sore backside, so we booked into a room and did lots of exciting things such as the laundry! We also spent the next day in Pangandaran, and while Ernest fiddled with equipment I spent some time on the beach - lukewarm water and good waves is not something I complain about. That evening after supper I started feeling nauseous and puked my lungs out all night. Although I felt a million times better in the morning, I was weak so we stayed on another 2 days. The first day I mostly spent sleeping, and on the second day I went to the bookshop and spent the rest of the day reading The Shining Mountain by Peter Boardman. I love mountaineering books and find our personalities and justification for what we’re doing scarily similar. It’s interesting to read that he had as much difficulty in explaining to people why he climbed, than what we have explaining why we’re cycling. 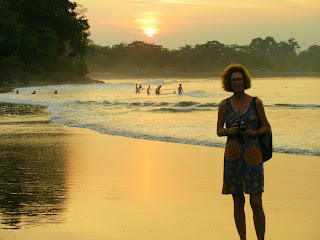 There were heavy thunderstorms during the night, and in the morning it was still raining. At first we couldn’t decide whether to move on or not, but by mid-day the weather had cleared and we were eventually on the road. It was a rather bumpy road, but that also meant not so many vehicles. We followed this tiny road over hills, past rice paddies and coconut groves, and through villages until we reached the large town of Cilacap. It was rather late and half dark by the time we found a reasonable room for the night.

With my eyes closed under the rickety fan, in the dead of the night, I sensed an unnerving presence. Then I felt it, something running over my bare stomach! The first shot missed, but I was quicker on the second take – and that poor cockroach didn’t know what hit him! Ooh, the pleasures of the tropics!

We got woken up with a tray of breakfast at 6-30. The breakfast consisted of a teenaged chicken thigh (with claw still attached), sticky rice, and sambals. No need to say Ernest had both plates, but was convinced that it had already been prepared the previous day.

We left by 8 o’clock (a record for us in recent times!), and continued East along the road. During the course of the day we found ourselves back on a main road, and in Java that means the road was jam-packed with buses, trucks and scooters. I have to remind myself that there are 130 million people living on this island of 132 000 square kilometers - the most populated island in the world. The roads are also rather narrow and often in poor condition – everything but a relaxing ride.

It was still fairly early in the afternoon when we arrived at Kebumen, a large town about half-way between Cilacap and Yogyacarta. Due to the early start we’d had enough for the day, and had no trouble finding a reasonable room. In some of the more conservative Indonesian towns it is, however, rather difficult to find a beer with which to relax during the evening – and this town is one of those places.
Posted by Leana Niemand at 11:03 AM