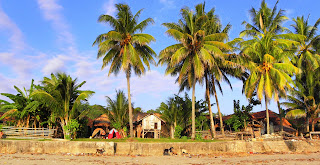 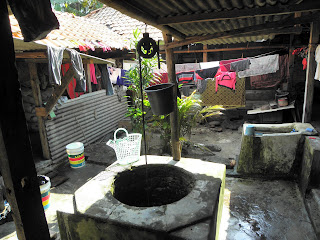 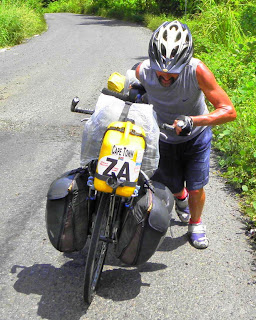 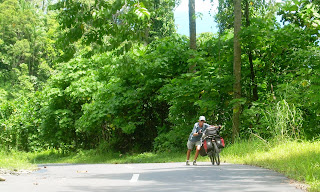 No, we did not move on, there we still were, we woke to bucketing rain, and decided to stay put.

Flip-flops is definitely the footwear of choice around here, for easy removal when entering shops, houses and lodging, I’m getting fed-up with removing laced shoes, it’s such a hassle.

Sleeping does not always come easily, roosters crowing at all hours of the night, dogs barking, mullahs calling people to prayer endlessly, and rock hard mattresses - not a good recipe for peaceful sleep. What is with the short mirrors, all I can see is my navel, surely no one is that short; uhmmm…… full of complaints, definitely time to move on. 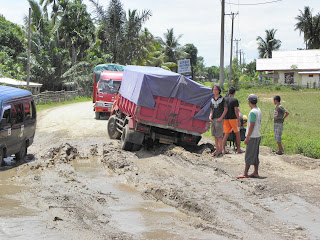 At last we were on the road again, and what a good day it was. The road was not bad at all and the hills where absent. I did not however, feel very well and struggled along on a day that should have been as easy as pie. Once we reached Seluma we opted for a room and even although it was hardly past lunch time, settled in and I even had a little nap. We walked into town in search of the food carts, with hordes of children in tow. They are just so sweet, a bit wary of us at first, but friendly enough, often chanting “tourist, tourist, tourist” which normally gets the whole town out for a look. 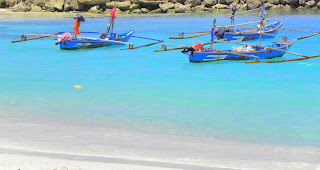 10 March 2010
Seluma – Manna
80km
Another fairly easy day as the hills were not as severe as before. We pedalled quite happily along through small villages, densely forested areas, rice paddies, and the ever present oil palm plantations.

Meeting curious locals normally comes with a barrage of questions. “What’s your name, where you from, how old are you, are you married?” After answering and posing for pictures with them, you’re considered a friend for life. 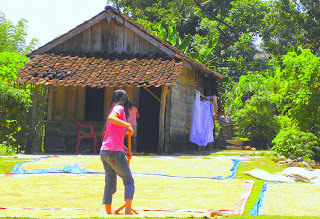 I was not quite firing on all cylinders but we carried on regardless. As usual it was hot, humid, the hills were steep and the roads were bad!! Kids were cheering us on as we passed through villages, dogs barked at our heels and elderly people looked up in amazement. We dodged potholes, geese, chickens, goats, and water buffalo as we passed through what seemed like an endless village.

We rolled into Bintuhan where the fried food stalls got the better of us. We booked into a room and went shopping, returning with a huge bag of fried snacks - enough to feed the whole of Africa, and if that was not enough we got ourselves a rice meal as well. . 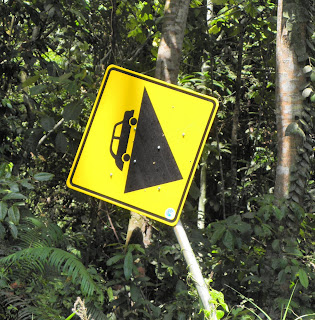 12 March 2010
Bintuhan – Pugung Tampak
82km
The day started deceptively easy as we cycled along the coast. Soon we headed over some of the steepest hills I have yet encountered on this trip. The sign board along the road which indicating the severity of the gradient was no exaggeration! At first I thought it to be a joke and that the board was placed the wrong way round on the pole, but I soon discovered that whoever made that sign was quite serious. We huffed and puffed and had to push our bikes up the endlessly steep hills.

It was supposed to be quite a scenic day (the road runs through a National Park), but I saw nothing just my own sweat dripping on the road. I was never more happy to see the end of a National Park, from where we sped down the hill towards the coast again and landed up in the small village of Pugung Tampak.

Dead tired, we found Cecep, who runs a basic “homestay” and caters for surfers. Cecep’s home is very traditional, built around a courtyard complete with a well, laundry and monkey on a string. We, however, decided to camp behind his house next to the beach, which was maybe not the best option. Soon the entire village surrounded us and I was concerned that the whole crowd was going to come down on my tent. I was aware of torches shining into my tent until the early hours of the morning, as visitors came from far and wide to witness the spectacle. I had hardly fallen asleep and the Imam started singing in the nearby mosque - let me tell you, that man should not quit his day job just yet. 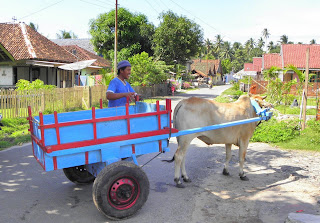 I felt tired from the previous day’s mountainous road and was rather reluctant to leave. Ernest was keen to carry on, so we packed up and cycled along the coast. Again it was hilly but nothing like the previous day.

We passed through some small fishing villages with double-storied wooden houses lining the main road. Laundry hanging on fence poles and produce being dried in the sun has become a daily scene. It‘s also not unusual to see the odd bullock cart along the way.

As we reached Krui we opted for a room as I felt weak and unwell. Aaah the pleasure of a room (with fan) where one can close the door and be out of the public eye for a few hours! 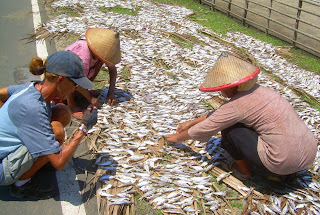 At last we had a flat scenic road along the coast!! It lasted for at least 60km but unfortunately came to abrupt halt as we turned inland towards the mountains. What a pity we’d stayed in Krui, as there were some fantastic beach bungalows just about 25km down the road. We just had a quick peek and then it was on the road again past more fishing villages where they were carefully drying tiny fish along the road. The smell of ground coffee and cloves accompanied us all the way. About 20 km paste the tiny village of Bengkunat we found a derelict government office and camped out back beside the banana plantation were we found handy (abandoned?) water well. Later we were almost as amazed as the villagers who appeared from out of the bush, coming to fetch their evening supply of water. In those isolated parts they tend to be a bit shy, and were stopped in their tracks as they came upon the two strange-looking foreigners camping next to their well. After surveying the scene they built up enough courage to fetch their water – eventually there was a whole crowd of them, and some of the children were even demonstrating the English they’d learnt at school (“mother”, “father”, “grandmother”, “grandfather”, etc.).

It was not the most comfortable of nights as first the mozzies feasted on us and then it started raining, we had no option but to crawl into our tents where we lay sweating in our own private sauna. Fortunately we’d cooked and eaten our dinner by that time. 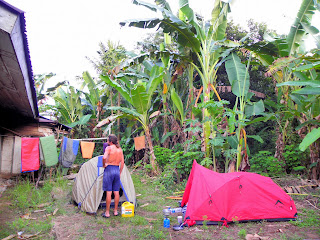 Ernest had one of his very slow mornings packing up, man the guy can drag his heals. It was 9h00 before we got on the road. I could not believe it was another day of serious hills!! Again the road ran through a National Park. I’ve come to the conclusion that National Parks are for hiking not for cycling. We climbed and climbed, higher and higher through a dense rain forest and although it was scenic I did not have the presence of mind to enjoy it. It started raining and the road became slippery and very wet. Once out of the park there was about 10 km of steep downhill, but alas, not to be enjoyed by us. A landslide had covered the road in clay soil, and in the rain it was rather hazardous. Those vehicles which attempted to pass were spinning and skidding in the mud, trucks were sliding into the embankment, but somehow we managed the get through.

The clay clung to our bikes to such an extent that the wheels could not turn and we were forced to stop and clear the worst away with sticks. At least we had one pleasant surprise, as we came upon the town of Kota Agung at least 20km earlier than expected (the best maps we could find here are not proportionally correct, they don’t indicate all the places, and they don’t show distances). We were pleased to reach the town, and we also found a comfortable room with a convenient tap and hose pipe where Ernest rinsed the bikes off. 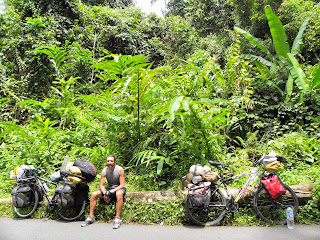 The hotel gave us a surprise breakfast of fried rice, and after the bikes were oiled we were on the road heading up another mountain pass. Nothing like a good long hill first thing in the morning. I much prefer a mountain pass to the short chain snapping hills we had in the previous days. At least one climbs up at a steady pace and then you go down again.

What a pleasant surprise we had! Once over the crest the road just went down and down and down, I knew it had to happen some or other time. It was a real pleasure. Around 15h00 the clouds looked threatening and drops started falling. At about that point we arrived at another unexpected town, and once we’d spotted the very nice local hotel Ernest and I gave each other a quick glance and pulled in there without a word being spoken.

More amazing was the fact that no one in Sumatra seems to know the km too the next town. They glaze over and then come up with a number that varies so drastically from the previous one that one never knows. They can, however, tell you to the minute how long it takes by motorcycle or bus.

Interestingly the distances given between Kota Agung and Bandar Lampung varied from 50km – 200km!! That’s quite a difference (in the end it turned out to be about 100 k’s). 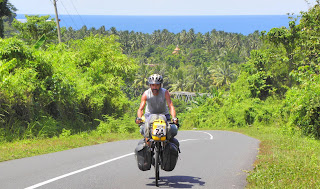 Breakfast was included in the room rate, and as everyone knows, that’s a dead loss to any establishment when cyclists are around. I just love the rice cooked in a banana leaf served with a fiery curry/coconut sauce. The Indonesians are not scared of chilly first thing in the morning. So I set of with serious heartburn up the hills again. This time the distance reported was between 45km – 75km to Bandar Lampung. Strange enough there were no distance markers along the road to Bandar Lampung.

We, however, reached Bandar Lampung after a mere 35km. I needed to extend my visa ASAP, as it has already expired the previous day and I was rather anxious to get to an Immigration office.

We found a rather expensive hotel but as it came with air-con and hot water I dug deep into my pocket and paid the price. Then it was off to the Immigration office just to find that I needed a sponsor. The hotel where we stayed was unwilling to help, what a pain!! I can’t blame them, I don’t know if I will do that for a total stranger. At least I was back in time before the storm broke which came with such roaring thunder I thought the nearby Krakatau had erupted again.
Posted by Leana Niemand at 1:08 PM