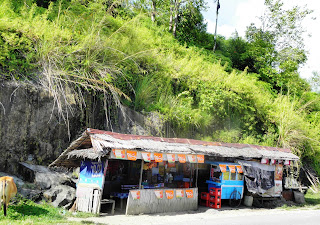 We headed South along the coast on our way to Jakarta (still about 1 000km away). What a stunning day on the road, we followed the coast for app 20km and then the road turned inland over the hills. We followed a small river through many tiny villages, past rice paddies, rivers and forests. Along the road people are drying all kinds of goods, rice, oranges, cloves, cinnamon, what a lovely smell. 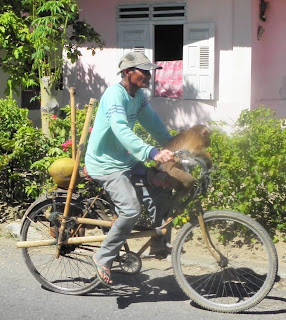 We ended up in the small town of Painan and intended to camp by the beach but I had a distinct feeling that the entire town had come out to watch us - they came from far and wide on foot, bicycle and motorbikes to witness the spectacle. In the end we headed back into town to find a room as it is rather difficult to find a bush toilet with the whole world watching! It was a rather heavy price to pay for some privacy as the room was so hot we could not sleep (even with the “air conditioner” on) and it had no outside window so there was no obtion than to just grin and bear it. Big mistake we would have been better off at the beach in our tents.

Although this is not the easiest cycling one can get, the scenery is unsurpassed. The day started with a good hill or two. It was boiling hot and we were sweating buckets. Again the road followed the coast past many fishing villages, rice paddies and rivers. We stopped to sample the food along the way, including cassava fried in a batter.

A drinks stop at a local shop normally attracts the entire village, staring unashamedly without even blinking an eyelid. The road is lined with villages and seldom do we pass someone without hearing “Hello friend” or “Where you going?” – as well as the occasional “What are you?”, “Who are you?”, or even “Why are you?”.

We made it to the small village of Balai Selasa just before the rain came down and there was just enough time for Ernest to go to one of the local stalls and pick up some more fried snacks, amongst other things. The room was as cheap as they come so we were surprised at the air conditioning, but soon discovered that it was only ornamental.

Bathrooms in Indonesia come with squat toilet and a water reservoir (mandi), from which one can scoop water with a plastic bucket to flush the toilet and “shower”. I was, however, so hot that I submerged myself in the reservoir, something I’m sure you’re not supposed to do, but there I had my own tiny swimming pool. Fortunate they have a power shortage, and in general very low voltage globes in the rooms – it’s better not to see what else is floating in the water. Power cuts seem to be a general occurrence, even stopping the mosque mullah’s chorus in mid sentence!

It rained all night but by the time we were ready to leave it had cleared and we were on our way. The road turned inland over the hills again but at least we had some cloud cover for most of the day.

We found some unusual fruit along the road, one (markisa) was like a passion fruit but less watery and with a thick skin that one can peel off to eat the pulpy inside. The other fruit (salak, or snake fruit) has a tough scaly skin with 3 firm white segments inside, quite sweet and delicious with a faint mango flavour.

Soon the heavy rain came down and by the time we were soaked to the bone we arrived in the village of Tapan, where we opted for a room. Sopping wet and dripping with water it was surprising that the landlady even let us in. An interesting room without any glass in the windows, just shutters, the room looked clean but Ernest picked up a really bad eye infection, we think from the pillow (or the wash water in the bathroom “tank”).

The day started flattish but got progressively more hilly. We thought we were on the coastal road (meaning next to the ocean) but it was up and down hills through palm oil plantations, and it just carried on, and on, and on. One needed to pedal like the clappers down the hills to make it up the next steep one. The road was full of potholes and often broken up in the dips, so it was not always possible to get enough speed down the hill to carry you up the next one.

Fortunately we had some food along the way as it became a rather long day as we were unable to find an ATM to stock up with cash again. Ernest also had a really bad day as he couldn’t see out of his one eye, and the other one was also becoming infected. Late afternoon the rain came down as usual and making it hard to camp as the ground was flooded. In the pouring rain after dark we were offered camping space in a disused mosque at a small village; at least it was out the rain – and we discovered that the lights still worked! We boiled some salt water for Ernest to wash his eyes, ate our noodles, drank our coffee and then it was straight to bed – accompanied by many eager mozzies.

The road continued up and down the steep hills, what a difficult ride it was. I felt short of energy and had difficulty with my smaller gears, not something you want on a ride with a million and ten steep hills. Up and down we went through oil palm plantations. Ernest struggled with his eyes and found it difficult to see, by now both eyes were virtually swollen shut.

We stopped in Ipuh but were unable to draw money, as the only ATM in town was out of order. We decided to take a room and I took the bus back (with my last money) to Mukomuka to where we saw an ATM, the previous day. Once there I was shocked to find that the ATM only took Master Card and not Visa (mine is unfortunately Visa). I was in near hysterics as now I had no cash whatsoever. The friendly man at the bank gave me 150 000 rupiah out of his wallet without blinking twice!! Can you believe that!! He did not even want to give me his name so I can repay him later. (I did however manage to get his name from one of the staff members at the bank). I will be forever grateful to that friendly man. It was enough money to get a bit to eat, take the bus back and pay for the room where Ernest was lying in a dark room with his eyes (obviously) closed. There was also enough money left to get a large amount of noodles to see us through to the next big town. I only got back to Ipuh at 10.30 that evening, hot, tired, hungry and thirsty. Ernest was not impressed, as he reckoned us worse off than before. Wow what a day, I would have dearly liked someone to offer me a cup of coffee instead.

At long last I could have a shower and change out of my dirty cycling clothes - I must have stank the people out of the bus, considering that I had not showered or changed my clothes in the previous two days.

The day did not start in a perfect way, after packing up Ernest discovered he had a flat tire (from a pothole the previous day). Instead of waiting I got on the road as it was already fairly late. Ernest is quite fast, in both fixing tyres and cycling and would catch up soon. Off I went up and down the notorious hills. If there is one thing I don’t enjoy, then it is slogging up steep hills in my granny gear at 5k/h and men on motorbikes pulling alongside wanting to know if I want to boom-boom, while pushing their thumb between their index and middle fingers. This only happens when I cycle on my own and never when Ernest is with. I gave them a mouthful and they took off on their motorbike.

By the time Ernest caught up it was already 16h00, so it wasn’t long before we pulled into a petrol station with a grassy patch where we were allowed to pitch camp. We ate the last of our noodles and drank our precious coffee and then it was off to bed. The tent was like a sauna and I would have loved to leave the fly sheet off but with all the usual spectators it’s not possible unless I want my every snore watched.

I was on the road before Ernest even had his tent down. The road was not as hilly as the previous days but littered with potholes the size of small cars. I bounced my way along the poor road until after 60km I decided to wait for Ernest. The people are just so friendly along the way, always shouting “Hello Mister, how are you?” from far away. When you answer there is normally scores of hysterical laughter afterwards.

Ernest soon arrived (I had to go into the road to stop him, otherwise he wouldn’t have seen me) and we were on our way to Bengkulu. Once there the first thing was to find a working ATM. With money in my pocket, we headed for the nearest hotel, had a shower and found some food. A shower is definitely not something that’s overrated!! Hotel Samudera Dwinka was quite fancy but they had some cheap rooms at the back which were quite comfortable, large, on the ground floor and came with a fan and a back door as well as a hot water dispenser – for plenty of coffee. (The only difference between our room and most of the other rather expensive rooms was air conditioning and hot shower).
Posted by Leana Niemand at 5:55 AM

Thank you for a very interesting account of your travels from Padang to Bengkulu Sumatra.
I hope to go to Sumatra one day and see the place.