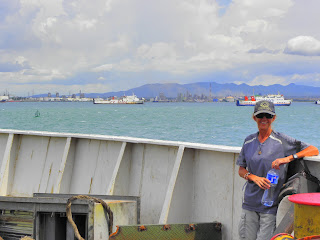 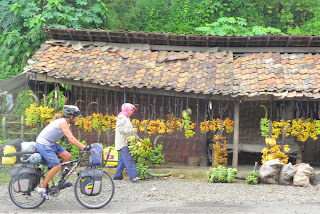 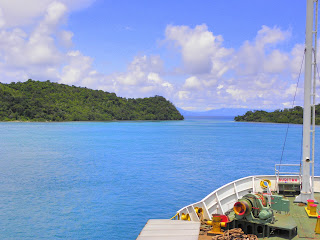 The entire morning was spent renewing my visa. Whatever you do, don’t overstay your visa in Indonesia; it came at quite a price. Arie Tours, on Jl Wolter Monginsidi, was kind enough to help me process the application (also at a steep price). Job done!

Walking around I noticed that there was more to Bandar Lampung than expected, big supermarkets, loads of hotels, (which we’d missed coming in on the bike the previous day), a huge local market and even a Carrefour and Pizza Hut around the corner! Uhmmm….. just wondering if I should frequent them.

Traffic was hectic and, like elsewhere in Sumatra, traffic rules are often disregarded. Traffic lights are ignored and so are one-way street signs, making getting around quite challenging.

There is nothing as pleasant as listening to the bucketing rain from the safety of your hotel room. (Ha, ha sorry that was not rain, just the air-con dripping outside the window)

19 March 2010
Bandar Lampung - Kalianda
63km
An easy ride to Kalianda where I thought of taking a boat to Krakatau, but it was a little bit pricy after paying for my visa extension and fine for over stay, so I gave it a miss and rather just spent the rest of the day in the small harbor town of Kalianda.

I’ll just have to do the volcano thing somewhere ells. There will still be plenty of opportunities to do that here in Indonesia.

Breakfast is often included in the room price, even in cheap rooms. Don’t get all excited now it’s only a plate of fried rice. After breakfast we packed up, loaded the bikes and were on our way to Bakauheni to catch the ferry to Java Island.

Once in Bakauheni we swiftly got directed to the ferry terminal and in no time were on a huge car ferry. It must have been the slow ferry as the crossing to Java Island took 2 hours. Somehow it didn’t seem necessary to buy a ticket for the passage (nobody asked for tickets, and nobody offered to sell any). Can this trip be for free, or did we just miss the ticket office?

The ferry ride came in true Indonesian style complete with Karaoke singers, instant noodles and the ever present deep fried tofu sellers. The fact that the staff were frantically working on one of the engines during the entire trip - bits of engine parts laying everywhere- did not seem to bother anyone. Sea traffic appeared no less hectic than the road traffic with other ships passing dangerously close in front of us (no surprise that the there are many shipping accidents in this region).

Once off the ship at the Merak ferry dock on Java Island, we hit the road in the direction of Jakarta. We only made it about 15 km through the traffic before we found a reasonable hotel in the town of Cilegong, with outside rooms under shady trees.

So came to an end our cycle in Sumatra and it will be interesting to see what Java is like. Was that a level road or did I just imagine it?
Posted by Leana Niemand at 4:03 PM