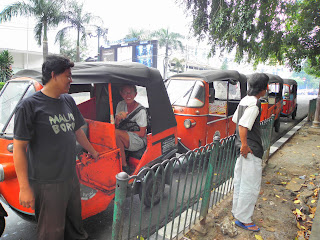 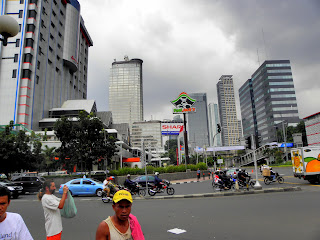 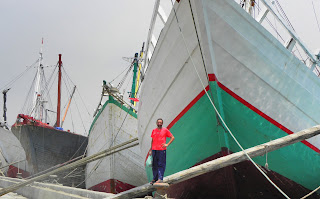 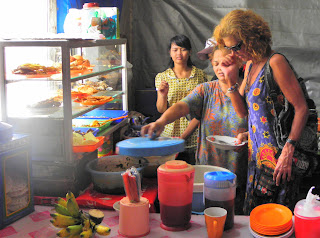 I thought that Sumatra was one long drawn-out village, but Java seems to be one long drawn-out city. Not once did we leave the built-up area, and cycled in traffic all day long. However, my impression is that the traffic is forunately very aware of cyclists.

Saw a guy pedaling down the road with his sewing machine (actually a sewing workshop on wheels). Well, what do they say? “If the mountain won’t come to Mohammad, then Mohammad must go to the mountain”.

It rained on and off all day long and by our third soaking we found a room where we could dry out. Although Tangerang is a large town we had some difficulty finding accommodation, as many hotels were seemingly full. Maybe they just didn’t want two scruffy looking cyclists dripping rain water all over their neatly polished tiles.

It was hardly a cycle into Jakarta, only 30km and we were there. We picked up a nice tail wind and got blown right into the city centre together with whirling dust clouds, cardboard boxes and plastic bags. The traffic was hectic with thousands of motorbikes and taxis. The one-way streets made it even more frustrating, just as we thought we had the route all planned we had to deviate to “who knows where” because of one-way streets.

Soon enough we found ourselves on Freedom Square and then it was easy to find our way to Jalan Jaksa, the cheap tourist accommodation area. We found a room at Borneo Hostel which was comfortable enough at the price. Ernest seemed to be all hyper-active and washed the bikes and some of his gear, as well as doing some work on his bike (hub and brakes). He was a real busy bee!

Donned hat and shades, and in full tourist disguise, we went exploring what is left of the old Dutch city of Batavia. We found only an old town square with one or two well preserved colonial buildings. The rest of the buildings seem to have been hit by some severe natural disaster (floods, earthquakes or is it just old age??) The old Dutch port (still with beautiful wooden fishing vessels, but in rather polluted water) is still operating. Cargo is still being loaded in a rather old fashioned style along rickety gangplanks. Wow, there’s no way you’ll get me to walk on those things.

Just around the corner was the fish market, (which at the best of times is a smelly place) but with dirty water gushing from open sewers, people doing their daily ablutions in full view in the nearby canal, cats and rats having the run of the mill and homeless people squatting seemingly everywhere, this one was a bit more smelly than your everyday fish market. Just outside the fish market we found the old “Uitkyk Toring”, which is now starting to resemble to Leaning Tower of Pisa.

Ernest loves taking local trains and so we did our exploring bit by local train, at Rp1000 (about 80 cents SA) a ticket it’s hardly money at all, but how come it’s Rp1500 coming back? It just makes no sense at all, same train, same route but different price…… weird. (Subsequent experience seems to suggest that you pay to the end of the line, which is further for us on the way back).

Scores of Islamic students staged protests outside Jakarta’s parliament against US President Barack Obama’s upcoming visit to the country. We nearly got caught in the whole thing but made a quick u-turn and headed in the opposite direction. The positive side was that the city streets were dead quiet and we could wander around at leisure.

Just to the south of where we’re staying is the modern city of Jakarta, complete with bumper to bumper traffic, modern shopping centres, high-rise buildings etc, etc. It’s however quite easy to get around, whether by bus, train, tuk-tuk, or mini-van.

I can’t believe we’re still here in Jakarta after a week! Ernest came down with a bout of bronchitis, but still kept fiddling with the bikes, and did some repairs to his tent, etc. Seeing that I’m neither domesticated, nor do I know anything about bikes, all I did was lie around, endlessly listening to music - what a pleasure.
Posted by Leana Niemand at 1:55 PM