It was another easy and short day on the road as we biked back to Malacca. Once we reached our previous campsite just outside Port Dickson we pulled in and set up our tents under the trees next to the beach. It was still fairly early but the memory of a shower made up our minds for us.

I was fairly content just sitting and watching the sun set over the Straits of Malacca. This time I was careful about where I put my tent as my experience with the fire ants from a few days before were still fresh in my memory. It was boiling hot even after sunset and my tent was like a sauna. Shortly after I lay down I felt a damp spray and thought it had started raining, but to my horror I discovered that it was the camp’s tomcat that had sprayed through the door netting onto my head!! Don’t laugh it’s not funny.

It was another fairly short day as we biked into Malacca. It seemed to be getting hotter all the time, and we sweated buckets. The dorm we found at the Sama Sama annex was however well ventilated and spacious and came complete with mosquito nets, what a pleasure.

The following day was Chinese New Year, and what a colorful time it is with thousands of red lanterns decorating the streets and houses in Chinatown where we stayed. Firecrackers went off until late in the night but still did not come close to an Indian cricket match!! The alleys were packed with people and stalls and one could sample all kinds of food to you hearts delight. I’m into the curry noodle soup lately and just can’t get enough of it. 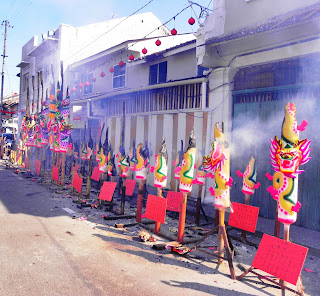 Posted by Leana Niemand at 3:38 PM