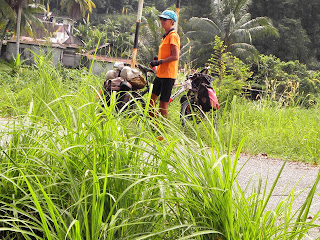 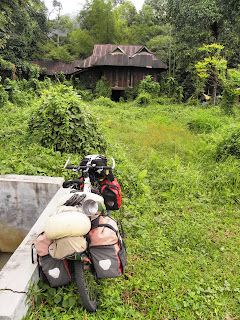 I was rather reluctant to leave the island as it was very relaxing but I packed my bike, had some coffee, and ate the leftover bread, so it was fairly late by the time I set off. It was 22km to the ferry port and although the ferry was to leave at 12.30 it was much later by the time we got away. Once on the road I followed the coast to Alor Setar which was much closer than expected. The road was scenic and flat with the coast on the one side and backwaters on the other side.

Once in Alor Setar I found a room, had a shower and rinsed my cycling clothes. I went looking for a map of Malaysia, still to no avail. I also tried to find a charger for my laptop but that was just as unsuccessful. Instead found some very interesting food. Wrapped in newspaper, some in a pyramid shape and others in a flat parcel. I had no idea what was inside, it turned out to be fried noodles and some very hot rice. 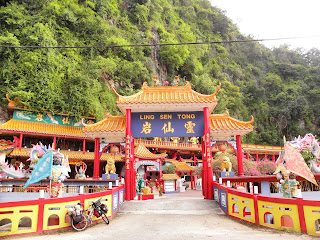 I first had some coffee (man that little cooker element comes in handy). I also still had one parcel of noodles left from the previous night which I had for breakfast.

I felt remarkably energetic and took the small roads along the coast (or tried) as it is not a good idea to take small roads when you don’t have a map. I only went wrong a few times but nothing serious. I did however get caught in a very heavy downpour and got totally soaked. 10km down the road it abruptly stopped and even the road was bone dry.

The road was fairly flat past very dense forests - it felt that I was in a real jungle. What a multi cultural society Malaysia is. I cycled past Buddhist temples, Chinese temples, Hindu temples (good to see old Ganesh again) and of course the ever present mosques.

Once I reached Butterworth it was easy to find the ferry to Penang Island. It was a fairly short ferry ride on a very packed and crowded ferry to Georgetown (the main town on the island). From the ferry Georgetown looked like a large city with lots of high-rise buildings. Just the short cycle from the jetty to a local hostel made me realize that there was more to Georgetown than high-rise building. Although Georgetown is a modern city the “old town” has been declared a UNESCO world heritage site and has therefore been preserved in its original state.

I found a fairly cheap room with loads of nearby foodstalls and feasted on both Indian and Chinese food.

Lo and behold, will Neil and Emma (whom I met at Zackary) not walk into the same hostel, we had a good old chat and it was real good to see them again.

What an interesting place Georgetown turned out to be. There were architectural styles from every corner of the earth, Indian, Chinese, Arab, Malay, Burmese and even Victorian, I even spotted a church or two. The most amazing was the Railway station, a beautiful Neo-classical style building, but without a railway line. What were they thinking? I explored the narrow alleys and interesting Indian and Chinese quarters, complete with the best Indian and Chinese food you can wish for. I even found my favorite Chinese steamed rise buns (not as good as the real thing in China though)

At last I found a charger for my notebook!! Now I could type away to my hearts delight again. Hopefully I’ll be better at keeping my diary up to date. I even got a new sim for my phone and can now be in touch with my family again, who are not all that good with the facebook thing.

It’s no wander they have declared Georgetown a UNESCO World Heritage site, as the old quarters with all its temples and alleys is a potpourri of nationalities, building styles and food. I spent one more day just wandering around the place and eating at all the roadside stalls in Little India and Little China.

While sitting in the sidewalk café of the hostel Ernest came cycling past but then proceeded to find a cheap room somewhere else.

It was time to move on again and it was 9h00 by the time I got away. So I continued on over the bridge joining the island with the mainland. Wow, what a long bridge it was, easily 8km long, it must surely be one of the longest bridges in the world. I headed south past mangrove swamps and bird sanctuaries. It is so lush and densely forested that it feels all the time that one is in the jungle.

I got caught in the most severe of monsoon storms one can imagine, complete with lightning and roaring thunder. I took shelter at a roadside stall with just a rickety umbrella for cover. The lady proceeded to feed me endlessly while I waited for the worst of the storm to blow over. Once the storm subsided I continued with a rather full belly to Taiping. The people are just so nice, I asked a man on a motorbike where I could find accommodation for the night and he escorted me all the way to a local joint where I could get a room. At the hotel they were really helpful as well, and allowed me to use their washing machine to wash my dirty and wet clothes. I was surprised they even let me in as I was dripping pools of water all over there clean tiles!

Another good day on the road, at least there were no thunderstorms like the previous day. The road was as scenic as anyone can which for, so I pedaled along quite happily. Although Malaysia is quite expensive (compared to what I have become used to in South East Asia), one can still find a cheap meal along the road.

I just had to look out for the places where the truck drivers take their meals and then I know there was a good cheap meal to be had. I spotted a few trucks all parked in front of a “Dhaba” so I pulled in. I had the best curried pineapple and rice ever.

Further along the road I met another cyclist with a rather loaded bike. He (like Ernest) seems to carry everything he will ever need in his lifetime with him.

The big meal I had along the way made me rather lazy and once I reached Ipoh, I found myself a room (very nice I must admit, with bath tub and all).

I was rather disappointed to discover that my notebook has finally packed up. I was so mad at this stupid thing that I went to the shop and bought a new one!!!

Back in my room I could just not believe what I had done. Spending all that money on a silly notebook, while I’m quite sure I could have had my old one fixed. I can’t even think of anything to justify my irresponsible spending spree!! Normally I’m quite good at that. 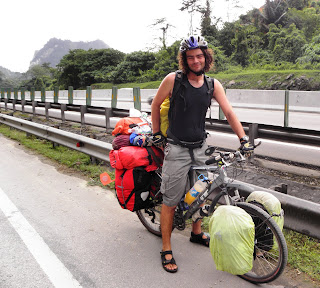 I packed both notebooks, as I felt too bad to just dump the old one! So I had two of the darnned things, as if I didn’t have enough stuff in my bags already! Well, maybe I could give it to someone.

It was an unbelievably scenic day with a number of very ornate cave temples along the way. Soon I reached Tapah where I had to turn off to go to the Cameron Highlands. I understood that it was only about 60km to the Highlands, but as everyone had warned me that it was a steep uphill all the way, I decided to stay in Tapah for the night and start the climb in the morning. 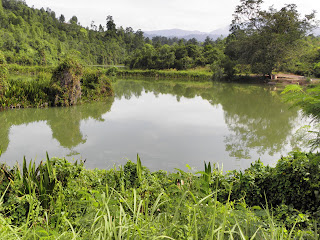 Posted by Leana Niemand at 5:14 PM