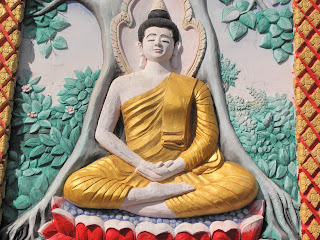 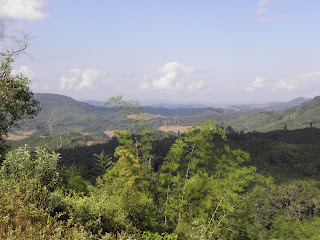 I was still not well, and as I’d previously cycled the route on the way North I decided to take the bus further to LaoS. So, that morning I set off for the regional bus station in search of a bus heading to the Laos border. This time I was lucky again and easily found a bus that would take me and the bike. It was another long and tiring day on the bus.

As things go, border rules change all the time. As I approached the visa office I noticed a new sign on the window listing all the countries that cannot get visas at the border any more (these were mostly African countries). It was with sigh of relief that I did not spot South Africa’s name amongst them. (what a time to tell you, as by now you have already been stamped out of China but can not enter Laos, what do they want you to do? Camp in no mans land for the rest of your life?). It reminded me of how important it is to always check the border crossing details before I head out. The crossing into Lao was, however, very easy, just a case of filling in a form, presenting them with a mug shot, paying your money and a few minutes later you had your visa. I only arrived at the first small town in Laos at 17h00.

It was good to be back in Laos, the difference was immediately visible. Chickens were sold next to the road in woven baskets. Wooden houses on stilts, children, ducks and goats wandering across the road. In general things are just a lot less organized than in China. I found a room and prepared myself for the long cycle south to Bangkok.

It was a cool misty morning as I left. I took route 3, which is a fairly new road and was in a good condition. It was mostly downhill to Luang Nam Tha and much closer than what I had expected.

Typical Laos, friendly kids come running as soon as they spot a foreigner, constantly shouting “Sabai Dee, falang” and waving – or they just stare in amazement at the crazy woman on a bike.

I arrived early in Luang Nam Tha. As I wanted to do a short walk in the Nam Ha National Park I took a room and booked myself on a one-day trek into the park for the following day.

Luang Nam Tha is a real sleepy village with a handful of shops, loads of back-packer type guesthouses and restaurants, a bank and post office. The night market, as usual, sold cheap eats and was a good place to pick up a bite before going to bed.

The 3-day hike would have been rather nice but it was a bit pricy and I settled for the 1-day walk. It was a small group of 4 who set off in a tuk-tuk to the start of the hike.

It was wonderful to walk in the forest with steep downs and steep ups, past waterfalls and through thick indigenous forests. We were even given a traditional lunch of sticky rice and vegetables. The hike ended in a small hilltop village where we had some tea and some of the famous Lao Whiskey (moonshine) - it truly took your breath away! 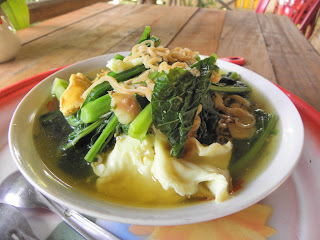 The morning mist lay thick in the valley as I left. It was a short but scenic road with mountains on both sides of the road, covered in thick dense forest. Most of the way was downhill so all in all a very enjoyable ride. Along the way a met another female cyclist on a 2 month cycling holiday in South East Asia. After a short chat we went our separate ways again.

Along the way I spotted a cave and decided to explore a bit, the cave had a “Keeper” who collected a fee for guiding me through the cave. Good thing as well, as it was black as night in there and at least the keeper had a torch (albeit a bit weak).

I arrived in Vieng Phoukha at around lunch time and found a wonderful Guest House right on the river with wooden bungalows on stilts overlooking the river. It was so peaceful and the landlady was so friendly that I decided to stay for the night.

I ordered a vegetable soup from her humble kitchen and what a meal that was! That evening I ordered more food, this time vegetables (mostly water spinach fried in a wok with soy bean sauce, garlic and chillies) and sticky rice. Now sticky rice is the main stable in Lao and eaten with virtually anything. It is so sticky that one has to tear it apart, roll it in a ball and then dip it in your food. It’s served in a woven basket or wrapped in a banana leaf, very filling and very chewy. 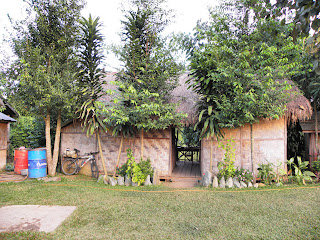 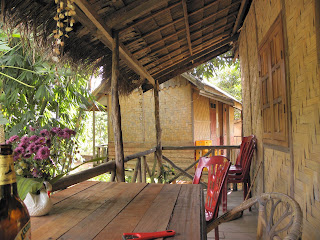 I knew it was going to be a long slow day so I got going fairly early, at least by my standards. First I was given breakfast and then I was on my way. After the early morning mist burnt off, it became the most beautiful sunny day. There were a few nasty hills along the way and the road deteriorated and became gravel in parts, making it rather dusty. I pushed on regardless as I wanted to reach the border town of Houei Xai that afternoon.

I met 3 more cyclist heading north, we chatted for a while and then, after wishing each other Godspeed, we went our respective ways. The road was scenic again (like all of Lao) and it was a pleasure to be out on the bike. I cycled past numerous villages, rivers and valleys. Rivers are the main bathing spot in villages and in early afternoon it’s a noisy affair with kids laughing and squealing as the whole village is there to take their daily bath.

I arrived in Houei Xai at around 17h00, sweaty and dusty and found the fist room available. I was fairly tired and did little else but get some food, shower and relax on the bed.

Houei Xai is a rather small village with just about one street, filled with guest houses and street food stalls. I handed in my laundry and spent the day strolling along the Mekong River. That evening Ernest eventually caught up to me - hot, dusty and sweaty after a long day on the bike.

Another day in little Houei Xai, not much to do but watch the sun set over the Mekong River. 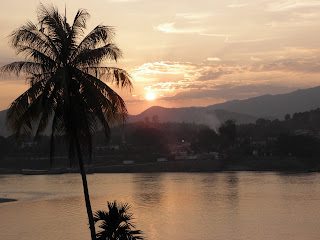 Fantastic blog you got here,I enjoyed reading some of your posts.