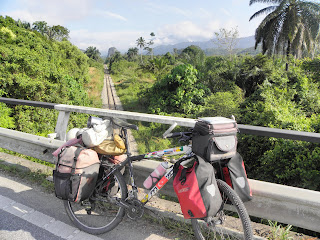 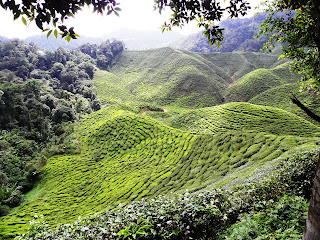 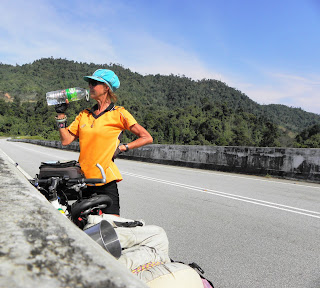 What a super, super, stunning day it was. All though it was uphill all the way, nothing came of the serious climbing that people warned me about. It was supposed to be a 1000 meter climb but I’m not convinced of that. The road twisted and turned through dense forests and past waterfalls and vast tea plantations. Gorgeous! After reading what other cyclists had to say about cycling the Cameron Highlands I was at first a bit apprehensive about the route.

Well, it was nothing like that or the hills in China. From Ringlet to Tanah Rata took about an hour and a half and I made it to Tanah Rata in good time and arrived just before 15h00 and before the storm came in, so a good day all in all.

I had good intentions of going for a walk in the forest, but somehow I managed to do nothing all day long. Kang Lodge, where I stayed, was comfortable and reasonably priced so I hang around and managed to do nothing. I did, however, find out that there was a road via Gua Musang to Taman Negara National Park. My map did not show any roads so I did not know what to expect. I also heard that there was no water or food along the way and other people who'd cycled that route had to camp along the road. With no stove in my posession I loaded up with a loaf of bread, cheese slices and some peanut butter. 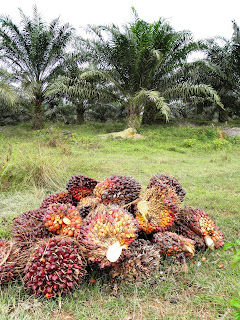 I packed my loaf of bread, peanut butter and some biscuits and left Tanah Rata at around 10h00. I soon found myself on a nice smooth, wide road with a roomy shoulder. I couldn’t believe that it was not indicated on the map! The road was rather hilly with steep ups and downs about all day long. There was a rather nice downhill of about 10km long and I felt rather reckless, flying down the hill at a high speed. The rest of the day was spent crawling up hills at 6km/h and flying down at 50km/h.

The day was very scenic again with dense forests lining both sides of the road. Logging is alive and well here and all day long trucks loaded with huge logs could be seen along the road. So, maybe the forest won’t be there much longer. Maybe that’s why the road is not indicated on the map, maybe they don’t want people to see them chopping down the rain forest.

It was not as wild as I had expected, I did spot some nice potential campsites along the road, but it was a bit early for camping so I carried on until I reached Gua Musang. What a large town it was with hotels, shops etc, etc. I was at first a bit disappointed as I was all geared up for the wilderness (ha, ha, with my loaf of bread and jar of peanut butter)!! I did, however, enjoy the lovely hot shower in my room. The room was a bit pricy but came with TV and Wi-Fi, (sigh) what happened to the wilderness I envisaged? 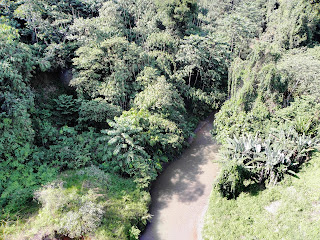 Phew, another very hilly day!!! I pedaled as fast I could down the hills to try and make it up and over the next hill without having to gear right down, but alas, that did not work. With my loaded bike I just lost momentum as soon as I hit the slightest incline. Anyone watching must have thought, “what is that women on about?” At least no one can accuse me of not trying! Up and down I went and I encountered the mother of all hills half way to Kuala Lipis. In the space of 5km I saw 7 broken down trucks, indication of the severity of the gradient.

The road followed the boundary of the National Park so it was very scenic, complete with monkeys and small alligators (or whatever those things were). This was rainforest area and very humid, I sweated buckets slaving up the hills. Most of the forest along the road has, however, been cut down to make way for rubber and palm oil plantations.

I was rather happy to reach Kuala Lipis as my legs were starting to feel rather tired. I found a nice room (air con and all) and enjoyed a much needed shower. Definitely time to rinse the cycling clothes!! Then off to find some Roti Canai (roti with dhal and potato curry) or nasi goring (fried noodles). 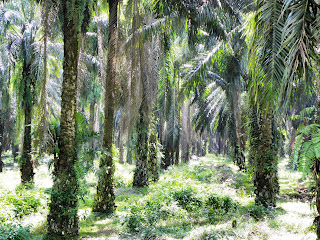 My map is useless!! I can just as well dump the silly thing. The distance between Kuala Lipis and Jerantut looked just a little shorter than the previous days, but (thankfully) it was only 61km. The hills were even steeper and more frequent that the previous days, but at least it was a short day. I took it easy and had some really good roti canai along the way. A stop like that always came with the same comments, “You’re alone?” normally asked in amazement. “How old are you” (even more amazement if you tell them) and “Where are you from”. Truck drivers stop and offer lifts and are just as astounded if one declines their offer. This day was no different and the truck driver assured me that he was going to Jerantut anyway and that there are many hills along the way. He could just not understand why I did not want to make use of his kind offer.

I arrived in Jerantut fairly early, found some nasi goring and then it was time to get some info on the national park. 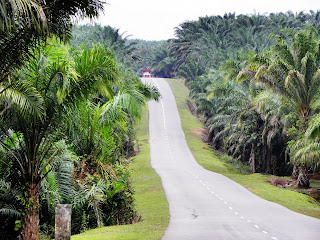 I changed my plans slightly, as I was going to leave my bike and bags in Jerantut and then take the river ferry to Kuala Tahan. There was however a good road going all the way to Kuala Tahan, so I did what I’m used to, and cycled there. I found that a lot easier as then I had all my stuff with me instead of packing a small day pack with just the necessary items.

I thought it would also give me the opportunity of cycling through the forest and experiencing it firsthand. Most of the way was, however, past palm oil plantations; I was a bit disappointed and could hardly conjure up any sympathy for a loaded logging truck that had careered off the road along the way. It was nevertheless a beautiful ride and closer to Kuala Tahan the real forest started appearing.

The Taman Negara forest is said to be over 130 million years old and I was eager to explore it. So upon arrival I booked myself on a night walk into the forest. Once again I was a little disappointed as the walk was along a walkway and could hardly be called a jungle. We are so spoiled in Africa where there are so many real wild places and so much wildlife!! I saw nothing that I could not have seen in my own garden at night back home. Well, that said, I must admit it was still rather nice just walking in the dark, listening to the night sounds and smelling the wet and damp forest.
Posted by Leana Niemand at 9:10 AM