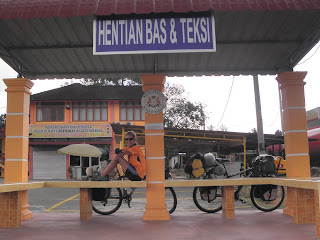 The previous day I’d already noticed that Ernest’s feet and ankles were unusually swollen (perhaps from malnutrition as he’d been living off rice for the past few weeks). This morning I thought it may be Elephantitus – and it got worse as the day progressed! I fed him multi-vitamins and all the take-away food I could find, including roti canai, to see if it would make him recover.

So, we decided to stay on in Mersing for the day, also so that Ernest could pay some attention to the bikes. I bought myself a new saddle as the old one had seen better days - hoping this was not going to be a pain in the butt!! I also needed to do some laundry and update my web site.

Ernest’s legs seemed much better, the swelling had gone down and he looked nearly normal again. It was a real slow start to the day but eventually we got underway, heading south towards Singapore. It was an undulating road past oil-palm plantations, with a few interesting bits and pieces along the way. We had to take shelter from the rain a few times which is always a good excuse for a sweet cup of tea from a roadside stall.

We found a real good hotel room for 32 Ringet with air-con and hot water. I was absolutely ravished as I’d had no breakfast and could not get down to the food stalls quickly enough. This was definitely a Chinese area as there was no roti canai to be had - only Chinese rice buns, and Chinese food, which I truly love.

My new saddle was fairly comfortable, but my backside was still sore, I guess it will take a while before it is completely ridden in.

Once again it as 11h00 by the time we left. We had to hide from the rain at the local bus and taxi stands a few times but the road was good and the weather very humid as usual. It was a leisurely cycle as there was no rush at all. We headed for the coast and in the process of looking for a nice camping spot we found ourselves in the seaside village of Rengit (with the help of a nice tail wind) where we opted for a room again – we’re getting so spoilt. Rengit is located at the south-eastern point of Malaysia close to Singapore where we planned to go the next morning.

Everything in Malaysia seemed oversized, including the bananas (called pisang, can you believe that), ants, and cockroaches. In fact there seems to be quite a few words that are similar to those in Afrikaans, including “pomelo” and “kampong” referring to a village. Then, on the other hand Malaysia also has a history of Dutch influence, so it’s maybe not that strange. 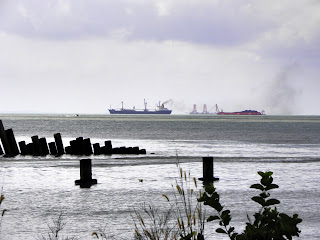 It was a short 17 km scenic cycle along the South China Sea coast to the ferry port. There we found that the regular big ferry doesn’t take bicycles, so we had to wait for the “bum boat” (it only leaves when there are 12 passengers aboard – but it was a lot cheaper than the ferry). The slow little boat took nearly an hour to cross the straits of Johor, and technically we arrived in Singapore just before we’d left Malaysia (there’s a time difference of one hour). All that was required for a 30 day stay in Singapore was a stamp in the passport.

From the ferry port to the city centre we followed a very scenic cycle path through parkland and along the coast. We spotted some fantastic camping along the way, but unfortunately it is not for foreigners. We continued on to the city centre but took a wrong turn and found ourselves in an expressway tunnel somewhere under the city. The traffic police was quick to spot us and load us up on their truck, dropping us somewhere else away from the forbidden routes (they strictly follow the many rules, and we were lucky not to be fined). With all this shunting back and forth we had no idea where we were, but eventually found the suburb of Little India. Gosh, how expensive things were!! We searched and searched for a cheap room but there was none to be had, and by 20h00 we had to settle for the cheapest overpriced room we could find.

By that time I was starving and could not wait to get some food from the Indian restaurant downstairs. Price did not matter, I just had to find food urgently. 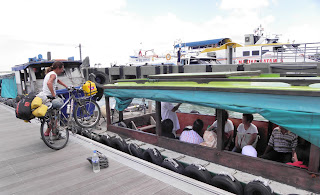 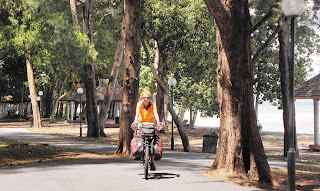 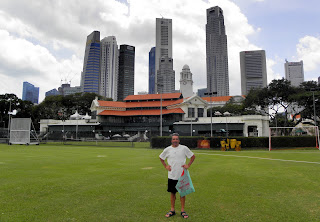 We walked around the city, but at 6 SA Rand to the Singapore dollar things are far too expensive for us. Electronic items are also not as cheap as expected and I’m sure one can find things even cheaper in Malaysia. The city is large and modern to such an extent that I thought it to be rather soulless, just another big, busy city with a busy harbor, airport, shopping malls and boulevards. High rise buildings dominate the skyline and even Little India seemed far more organized than the original “Big India”.

The Singaporeans are busy people who always seem to be in a hurry, of course, with all the electronic devices one can imagine stuck to their ears. There was no shortage of designer stores and fancy eateries which we could only stare at through the windows. Around just about every corner one can find Mc Donalds, KFC, and 7-Eleven.

I felt that Singapore is overrated and way too expensive, so it was time to get out of there in a hurry (i.e. the following day), making this the shortest time I’ve spent in any country. 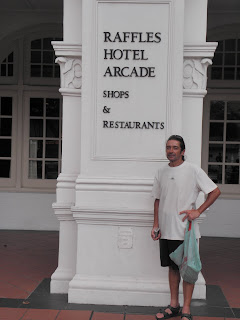 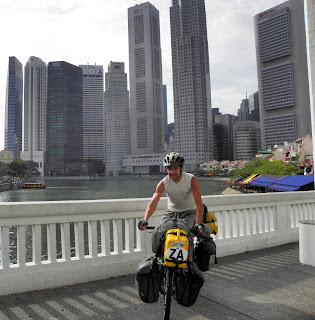 Posted by Leana Niemand at 7:35 PM

Glad to see someone else has the same opinion of Singapore as I do , I tried to live there for 5 years , now in Malaysia and loving it.
Never tried riding in bike in SE Asia , always thought it too dangerous . the way they drive .
Happy travels

darn! what a shame! you must have hung out at the wrong places. yes, singapore's a tad more expensive than malaysia but i'm glad it's so much cleaner!

I think in a day its impossible to know the real Singapore.

As for electronic goods, its not true tht Malaysia is cheaper.

Jim Rogers moved himself and his family to live in Singapore. He is loving this country.

Maybe Singapore attracts the well heeled mostly, but still you can have alot of fun without breaking your wallet. If you know how and where to.