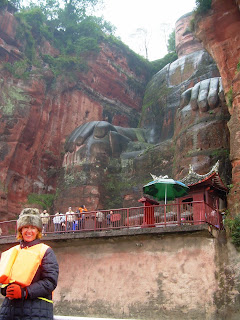 It was close to zero degrees as we left Leshan, and it was not the most scenic of days - most of the way was through built-up areas. Just to add icing on the cake it rained for the last 30 km or so. At least the road was mostly in a fair condition, and there were no major hills.

We arrived in Meishan wet and frozen and obviously not looking our normal stunning selves. Ernest (still in his wet and muddy cycling clothes) went off to the fried potato stand for a snack, but came back empty-handed. The old lady didn’t want to serve him and chased him away threatening to hit him with her ladle!! (The tramp-like bearded monster must have put the fear of God into her). I must admit he did look a bit like the villain from a Shakespeare play with his long cycling pants, knee length black raincoat and beanie.

In the end I had to don my coat and cassock hat and head to the corner to pick up the fried potatoes. At least I had already had a shower and, I’m sure, as a woman I did not look as threatening.

It was slightly warmer than the previous days as we headed towards Chengdu. We cycled the entire day through built-up areas, Chengdu is a very large city, (population of 13 million!). We had no difficultly cycling into the city and finding the city centre, but finding the well known Sims Guesthouse which we were looking for was more difficult than expected. (If you’re an adrenaline junkie try cycling around this city centre after dark with no idea of where you are). After wandering around this big city for about an hour in the peak-hour traffic and in the dark, we eventually found Sims’ GH. The place seems nice, but a bit expensive in comparison to some other accommodation. We booked in as by this time I’d had enough of cycling up and down busy multi-lane roads with thousand of cars, busses, bicycles, motorbikes, and the dangerous silent electric scooters.

It was way too cold in this place, so time to head South again. Our Chinese visas were only valid until 7 December so we decided to take the train to Kunming and then bus to Jinghong not too far from the Laos border (we’d already cycled that stretch, and our visa time is limited). I will also have to make a plan to get to Bangkok before the end of December to take care of some urgent business. This, I can only do at an embassy and the closest one is in Bangkok. We spent the day organizing our train tickets back to Kunming and wandering the crowded streets and alleys of Chengdu.
Posted by Leana Niemand at 5:55 PM

Great information provided. I appreciate your work. I like the way you write. Awesome, keep it up.