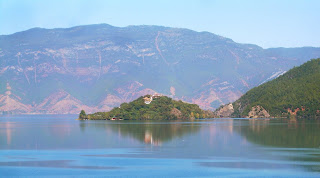 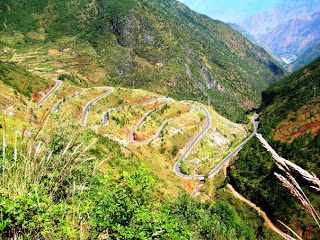 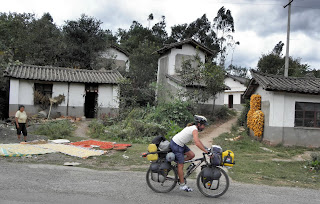 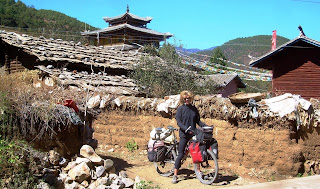 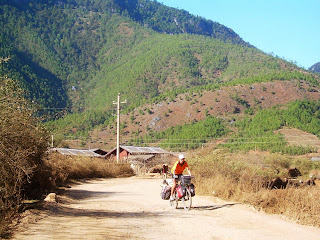 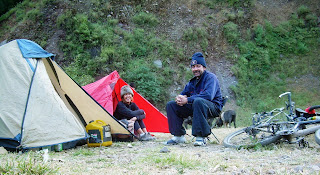 After being fed coffee and banana pancakes by Mamma (all free of charge) she sent us on our way with a bag of fruit. We headed out of town towards Lugu Lake, home to Mosu villages. I believe the Mosu are the last practicing matriarchal society in the world. So after reading “Leaving Mother Lake” a fascinating account of the author’s childhood memoirs growing up in a remote pat of China, I was keen to see what it’s all about.

After a long downhill we crossed the Yangzi River and encountered a 40km mountain pass. Not only was it a climb of 1700m to an altitude of over 3000m, but it was on a rough cobblestone road. Heavens, who still paves a road with such rocks? - definitely not cyclists, a plain old dirt road would have been much easier on my backside. The going was dreadfully slow and half way up the hill we decided to put up camp and carry on in the morning.

An easy place to camp is near the water point where trucks and busses fill up with water for their brakes, as there is always toilets, water and normally a small amount of stuff to buy. It, however, comes with loads of buss passengers all wanting to chat and take some photos of the 2 mad cyclists (they think they are roughing it in a bus). The owner of the water point was however very friendly supplying us with a flask of hot water and a spade full of coals to keep us warm.

We were reluctant to get up, as it was rather cold so high up in the mountains. We slowly emerged as the sun come over the ridge. Soon loads of tour busses arrived and we spent, what felt like hours, trying to explain where we’re from and where we’re going. We posed for innumerable photos and eventually carried on up the never-ending hill.

At snails pace we moved up the mountain slipping and sliding on the cobblestone road, and dodging stones rolling down from the steep mountain sides - landslides seems to be a regular occasion and every now and again the road was blocked with just a small section cleared to let traffic through. Eventually the cobblestone road gave way to a perfectly good tarred road, (now why could they not do that the whole way?) and we managed to make better progress. Once we reached the top (3100m) a real good downhill awaited us, and with long shadows we coasted into Ninglang with the long hill (nearly) forgotten.

In Ninglang we found a room and good take-away food, and settled in for the night, after a luxuriously hot shower.

It was freezing cold in the morning and we struggled to get out of bed. After unsuccessfully searching the town for an ATM we left and immediately encountered a mountain pass. It would also not be the only one for the day. The road to the lake was narrow and not in great condition, but at least very scenic. This was truly rural China with loads off colorful villages and locals going about their daily business. Once we reached the second mountain pass for the day we, to our surprise, found yet another cobblestone road. Our pace slowed, once again, to snails pace as we headed up the hill. The road was so narrow that every time a bus or truck came along I jumped off the bike and rather waited for it to pass instead of being flattened or forced over the sheer edge into the ravine far below. (The bike tends to jump in all directions on the stone road, especially when crawling up the steep hills).

As night was falling we thankfully reached the only piece of level ground we’d seen for a while – a patch bordered by the curve of the road, a homestead, and an animal shed – just big enough for our tents. Importantly, there was also water, as there was a stream and the residents supplied water to the trucks and busses (brake coolant). At 3000m it was rather cold as soon as the sun disappeared and we donned all out warm clothes. Again our activities where closely observed by all, including the pigs, dogs and chickens in the makeshift shed a metre or 2 away.

We only got going after 11h00 as the sun just never seemed to rise over the high mountains around us. The pass continued up for the next 6km and but eventually we reached the top at 3350 metres. There was no mistaking the top for all the prayer flags and the excellent views. I was more than happy to rather go down, cobblestones and all. The road was so narrow and the cobblestones so slippery that I was constantly wondering whether I was going to slip off the edge and just disappear down the gorge.

It was, however, a good downhill run to the lake, and what a view!! The view was worth every slippery cobblestone. Luoshui was the fist village we came to and we took a room as; we understood, they could give as some cash in advance on the credit card. The phone line was however off and if I understood it correctly they said we must try again in the morning (big risk!).

Thankfully the machine accepted my card and I could pay for the room as well as get some cash. Phew, that was a huge relief. We packed up and cycled along the dirt road leading around the lake which later improved to a newly tarred road). Ten k’s later we found another pictures village and I couldn’t justify coming all this way and cycling right past such a beautiful spot. We found a great room with floor to ceiling windows with a lake view for R50 and that was me set for the day. No one was going to get me away from that window with its bench windowsill complete with cushions where one could sit in the sun and look out over the lake.

The lake may not be as remote as it used to be, but it is still absolutely stunning. One can now even find some curio shops selling very colorful embroidered clothing, long stem pipes and all kinds of animal skin clothing. New guesthouses are also going up fast and furious and it will not be long before the whole area is totally developed. Still I have not seen any western tourist in the area.

What a place it was, stunning, stunning, stunning. We carried on cycling around the lake and came upon many small settlements, with villagers still fishing in the lake and living a traditional lifestyle. We went pretty slowly and it was only around 15h00 that we reached the small village of Wuzhiluo. It was so peaceful and tranquil that we decided to stay the night. We found a real nice place (Wind’s Guesthouse) and even had food there that night. For R15.00 we ate and ate and ate and until it felt like I was going to burst.

Over the previous few days Ernest had developed a nasty cough and they even went to all the trouble of making and delivering to the room a special remedy for his chest (steamed pears in honey). Here we also encountered the first Western tourists we’d seen in the Lake area – Marie and Robert from France.
Posted by Leana Niemand at 5:42 PM