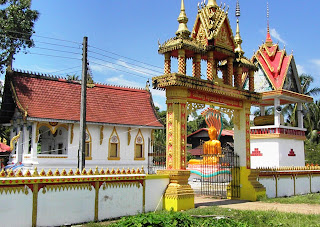 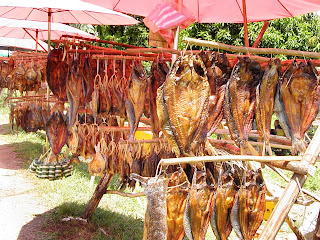 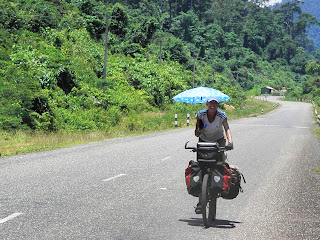 We crossed the border without any difficulty. We just had to fill in a form, pay $35, produce a photo and we were A for away. Laos immediately appeared more laidback, less motorbikes and less populated than Vietnam. There appears to be very few ATM’s around so Ernest had to turn back to go draw money on the Vietnam side of the border and then change it to Laos

Kip with the local ladies. Changing money at the border is always a tricky situation and seldom a win-win situation.

The ride was extremely scenic but very hilly with loads of kids shouting “hello” (sapadii) along the way.

We cycled up and down many hills, past dense forests, valleys, river and waterfalls. Along the way were hundreds of friendly children shouting “Sapadii Falang” translating to Hello tourist.

Most houses are built on stilts and water buffalo, goats, chickens, and black pigs wander freely. Along the way were many small villages and Buddhist temples surrounded by rice paddies. The air was fresh with the smell of herbs and smoke from cow dung and charcoal fires, it so reminded me of Africa.

Another scenic day on the road, it made me happy to be on the bike. What little breeze there was, was just enough to prevent us from totally burning up. We once again sweated buckets. We still arrived in Savanakket early enough to look around for a room at a leisurely pace, do some shopping as well as some internet. Before unpacking ernest went off to look for spares for his worn-out bike, but to no avail.

With the majority of the population being Buddhist, it is now also easier to find vegetarian food. I made good use of this luxury and found myself a decent plate of food for the total sum of R5,00. Sticky rice appears to be the main staple here and is eaten with every meal. Rice boiled in a banana leaf is also available absolutely everywhere.

Once again I got a sim card for my phone, but as was the case in Vietnam, I seem to be able to send an sms but can’t receive any.

Savanakket is a maze of old crumbling French colonial buildings as well as old Buddhist temples. Old men sit and play board games in the alleys and children roam the streets. The smell of incence fills the air mixed with the aroma from food being fried. After sunset everyone sits outside on the pavements chatting and nibbling on street food. Thousands of food stalls line the river frontage and locals sit on kindergarten chairs chatting and watching the sun set over the Mekong River.

It was the start of the Buddhist “Lent” and from early morning bells were ringing and monks were chanting in the temple across the road. What a peaceful way to start the day. The streets were lined with food stalls (mostly vegetarian) and it was a feast walking down the road and sampling all the strange and wonderful dishes.

Ernest worked on his bike most of the day, using old parts which came off my bike (don’t know it that will help much).
Posted by Leana Niemand at 11:47 AM