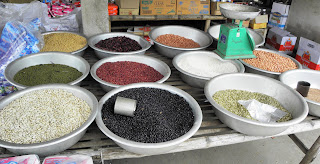 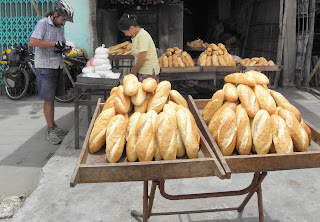 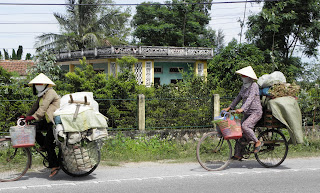 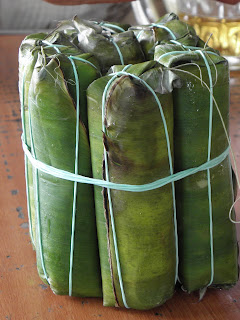 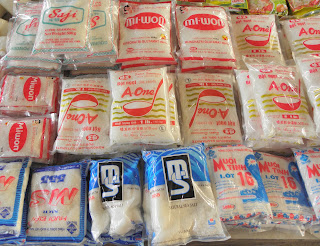 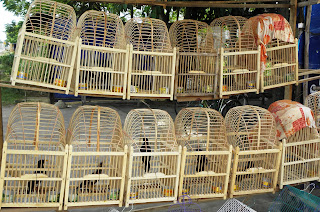 With Bia Hoi”, draft beer; being sold at all the stalls along the road, drinking and driving doesn’t seem to be a major offence. It’s rather easy to spot a Vietnamese who has been drinking as their faces go bright red. So when a red faced Vietnamese on a motorbike pulls up next to you, sending an sms with the one hand and having a cigarette in the other, watch out.

In this region of the world one can buy MSG by the box load at the market; I must admit that it is totally necessary on the noodles.

I had a much better day on the road, I must be better from the flu, or it was not as hot as the previous days, what ever it was, it was a great and easy day on the road. Listened to more great music, Eric Clapton, Jeff Buckley, Pink Floyd and Bob Marley.

Although the road is not that busy with cars there was still a great number of trucks and busses, all hooting like crazy when they come up behind you, loud enough to blow you off the bike. They also seem to drive on, what is more commonly known as, the Egyptian brake, just hoot and go. Early morning we also witnessed a young lady on a bicycle killed by a truck, with her family sitting weeping around the body in the road. This put me in a very pensive mood, it’s so final, no take two, no replay, its game over.

It took a long time to find a suitable room at the right price in the small town of Tinh Gia - even turning off to the nearby beach in the process. The room which we eventually found came with the compulsory comb and toothbrushes.

Here one can buy “Bia Hoi”, draft beer; in a liter plastic bottle or 8000 dong - about 4 SA Rands (1USD is 18000 dong), not bad. The saying goes that if you can order a beer in the local lingo you’ve mastered the language. Well, in that case I’m doing just fine here.

The morning ritual is always the same, first some coffee and biscuits, pack the panniers and load the bikes up. My prized possession is the electric element for making a quick cup of coffee in the morning. At least it’s a lot less trouble than having Ernest start up his MSR stove.

Another boiling hot day on the road, with trucks blowing warm diesel fumes and road dust in our faces. If the going got tough all you had to do was look up and see the beautiful scenery.

I felt dizzy and nauseous all day, must have been the heat, but I stuck the ipod in my ears and battled on. Must have gone through the whole lot Creedence, Jimmy Hendrix, Led Zeppelin, Queen, the works.

We decided to stay another day in Vinh and recover from our flue, so we stayed in bed and we spend the day eating. Ernest made a real great fruit salad for lunch as well as a good green salad for supper.

I was up early to catch the sunrise over the river, what a sight. What a hard day it was, although fairly short the sun beat down relentlessly. Neither Ernest nor I had recovered from the flu and we felt weak and tired. The map and distance markers along the road varied and we could not figure out which the correct one was, until we discovered that a new tunnel had been built. To our relief we did not have to climb up and over the pass. We zooted the 500 m through the tunnel in no time and emerged on the other side where we could see the road, winding over the mountain. It did not only cut out the pass but cut about twelve km off the distance. Exhausted we arrived in Ky Anh and found a room, I felt weak and dizzy and had no energy so I just ate my noodles and went to bed.

Few people have a concept of cycling long distance, and mostly just glaze over when you tell them where you’re from and where you’re going. It truly baffles them that one can cycle from one country to the next. Why not take a bus or a motorbike, surely if you’re a foreigner you must have loads of money? I’ve given up trying to explain, I don’t have a decent answer for it anyhow.

Ice is a big business here, early morning one can see ice sellers on bicycles with huge slabs of ice going from business to business. The ice is then put in polystyrene cooler boxes and needless to say, one pays extra for everything coming out of that box.

It was a boiling hot morning again as we left. The sun baked down on us and dried and shriveled our skins from above, while the black tarred road radiated heat upwards leaving us drenched in sweat.

We crossed the DMZ area, to Dong Hoi, which is situated on the northern side of the Zone. Today this is a peaceful area, with plenty of rice paddies. The area is littered with bomb craters which has now filled up with water and which the locals use as fish ponds. Hay, why not, make the best of what you have.

Along the way we stopped for a cup of coffee, which they serve in a glass, only about three quarters full, but as strong as hell and served with a bowl of ice and a straw.

Before midday the rain came down, and as there was still a long way to go, we decided to brave the rain and continue cycling instead of taking shelter. Luckily the showers were over in less than 2 hours, and some of the sweat was rinsed off us.

Dong Hoi is blessed with a great location right on the river, but even here one gets reminded of the war as you enter the town and see the ruins of a church, bombed by the Americans. We found a room right on the riverfront with beautiful views of the river for seven dollars. It only had a fan and even lying under the fan sweat was still running down me.

Vietnam had so many wars, first the Chinese, then the French and then the Americans, with the result that even the smallest village has a war memorial. Dong Ha is situated on the border of the DMZ (Demilitarized Zone - strip of land on each side of the river which was the border between North and South Vietnam). Ironically it became one of the most militarized areas in Vietnam during the American/Vietnamese war. There’s therefore no lack of war memorials and graveyards in this area. What a waste of lives.

Another sad part is that the local people, in spite of large warning signs, dig around the area for leftover metal to sell as scrap. The result being, that even now, 40 years later, people are still being killed by left over mines and unexploded bombs, etc.

We cycled the short distance into Hue. I have no idea how to pronounce it; none of the ways I’ve tried seems to be the correct one. We handed in our passports for our visa renewal which costed quite a bit of money but what must be done must be done.

While waiting for the visas, I spent the next day walking around the citadel where most of the interesting sights in Hue are located and half its population still lives within its 2 meter thick outside walls. Inside the citadel is the imperial enclosure as well as a 37 meter high flagpole, some beautiful temples and pagodas, which survived the American/Vietnamese war.

Hue is located on both banks of the Perfume River and just across the river from where I’m staying is Hue’s largest market, the Dong Ba Market. If you can’t find it here you won’t find it anywhere.

The Trang Tien Bridge over the river is quite spectacular at night as it is lit up with ever changing colorful lights. Dragonboat look-alikes are moored along the side, begging to take anyone with cash for a sightseeing tour along the river. Ernest also started suffering from flu here, so now there were two of us.

I was eager to get out the room and on the road again, even although I still felt rotten from my cold, which I hoped would get better. Ha. Ha get better while cycling, no change. On a day I least needed it the road threw three mountain passes at us. I huffed and puffed and coughed up the passes and when the weather came in at around half past four we found a room instead of cycling the last km’s in the rain to Hue. At least the view up the Hai Van Pass was great.

Along the way the Vietnamese stare openly at us, even calling friends and family to come have a look at this spectacle. On more than one occasion local women has pointed at my arms and pulled up their noses in disgust for me not covering up. They think we craze for being out in the midday sun getting frazzled.

My flu got worse and worse, so we stayed another day. I hate being in the same place for such a long time, but there was nothing to do but wait until I feel better. I spent the rest of the day in bed, watching the gecko’s running up and down the wall and listening to Vietnamese TV of which we don’t understand a single word.

Hoi An is incredibly touristy and one is constantly harrassed by touts, grabbing hold of you “come see my shop”, “special price for you”, “I make nice shirt for you”, “you buy something “, “very cheap manicure, pedicure, hair removal, foot massage” - it drives me crazy!
Posted by Leana Niemand at 2:57 AM