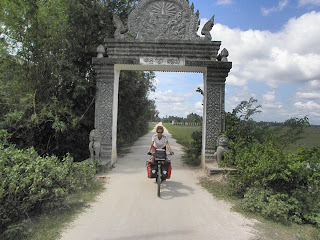 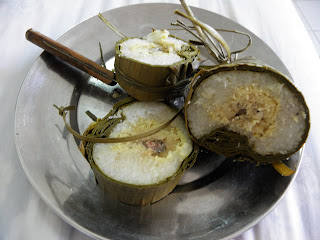 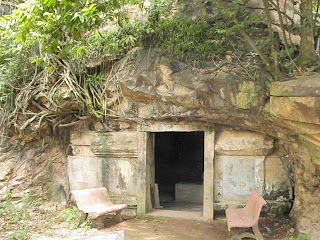 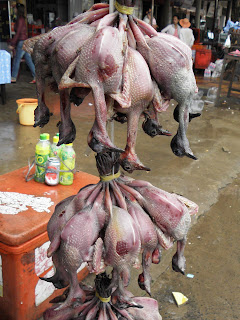 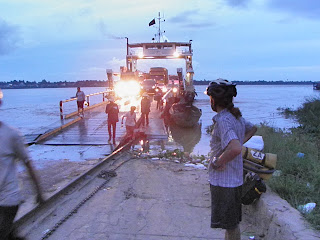 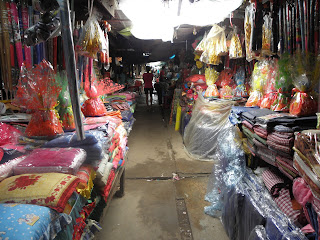 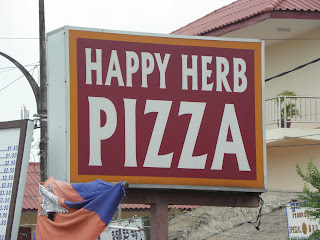 The only downside about Cambodia was the feeling that one got that you were constantly being ripped off. It was not the same as in Africa or the Middle East were bartering was a way of life. In Cambodia you got the feeling that the price quoted was purely because you were a foreigner. The assumption is that all foreigners come loaded with bags of dollars. Patience and a sense of humor (neither of which I have after a long day on the bike) was thus needed when shopping for the smallest item.

At least there appeared to be less snakes than in Thailand, no doubt due to their prominence on the local menus. Ants were a much bigger problem and anywhere one stopped along the road, you normally got attacked in no time.

25 km along a bumpy, statue filled road, brought us to the sleepy seaside village of Kep. Most junctions were marked with a statue. So directions were easy i.e. go straight on at the rhino and turn left at the horse! On the way in we spotted a bakery and bought a loaf of bread. Then the challenge was on to find something to put on the bread (unsuccessful). The lack of shops meant that supper would be instant noodles on bread.

There was not much to see or do in Kep and after a stroll along the coast around to the beach, I think we’d seen about everything. We tried to do some shopping at the Crab Market, a long row of little restaurant/shops offering mainly grilled seafood (no good to a vegetarian like me). It is however fantastic to think that walking along a pitch dark road at night is totally safe.

I tried to go to the nearby island but the weather was getting really bad, (the rainy season had definitely arrived) so I decided to give it up and rather return to Kampot, were there were more facilities.

Once in Kampot I visited the local market (just across the road) and , like all other markets its crowded, hot and cramped but again the range is vast. This includes large quantities of MSG (totally necessary on instant noodles).

The weather came in and it bucketed down all day. Heavy rain, thunder and lighting confined us to our room for the rest of the day.

Drinking tap water is also a big no no, but for Ernest it proved no problem as he purified it by adding two parts of the cheap local Mekong Rice Whisky to one part water!

The rain continued through the day, but I made use of an hour or two of clear weather to visit the nearby cave temple on the back of a moto. We slipped and slided through the mud past rice paddies and small villages until we reached the cave. Once there, local kids offered to act as tour guides (for a small fee of cause). A stone staircase leads up the hill and down into the cave, where the kids pointed out the shapes of various animal outlines on the cave walls. Inside the cave there is a 7th century brick built temple dedicated to Shiva. The view of the surrounding countryside from up on the hill was also magical.

Cambodia is also the first country where I have encountered the Happy Herb Pizza (pizza a la ganja) so if you not into smoking, just have a pizza!

Ernest and I parted ways again, the weather looked clear so I set off towards Takeo. It was once again a beautiful ride on a narrow bumpy road with potholes the size of small cars. I arrived in Takeo around lunch time, which gave me plenty of time to walk to the nearby market. I found some fruit, corn on the cob and something that I still don’t know what it was (it was good nevertheless). I also found some not so edible food, dog!! I passed that by without as much as a glance in its direction and decided to stick to instant noodles.

My guidebook stated that one could get a boat to Angkor Borei, at the canal. Being unable to negotiate a reasonable fee, I decided to take a moto instead. I soon discovered why a person is supposed to take a boat. There was no road. On the back of the motorbike we flew through rice paddies, potholes and along dirt tracks. I was bouncing like a rag doll with arms and legs flying in all directions, clinging for dear life to my camera bag. Once in Angkor Borei there was little to see in this 5th century city. What was once the capital of the area is now a poor village with just a few houses on stilts. There was however a small museum with artifacts found in the area.

The nearby Phnom Da was more interesting with an overgrown temple situated on top of a hill accessed via 142 stairs. In addition to the temple there is also a few man made caves. After I spotted a bright green snake slithering down from the cave ceiling it was time to retrace my steps to the motorbike, and back to Takeo town. When I arrived I found Ernest who, by total coincidence, had just arrived at the guest house where I was staying.

What an eventful day it was. Firstly, I was very grateful that I’d met up with Ernest again. Halfway through the day my front luggage rack broke again, and typical of Ernest, he has everything except the kitchen sink in his panniers. After fixing the rack with some rope we set off again. The road was in very poor condition, very narrow and extremely busy which forced us to cycle on the uneven gravel next to the road. We often had to do some late swerving to avoid the loads of food stalls, selling all kinds of nibbles including dried frogs.

The idea was to cycle about 90km and then carry on again in the morning, but somehow we missed the town we had in mind and had to carry on to Neak Luong where there was reported to be accommodation. We were hoping the reports were correct, as we were caught in the rain and due to the earlier repairs to my bike we were eventually cycling in the near darkness. Neak Luong is on the other side of the mighty Mekong River and once in Kampon Phnum we took the car ferry across the river. Fortunately the ferry seems to run 24/7 as it was already dark by the time we got there. Food vendors operate on the ferry sell all kinds of unidentifiable items (and again the ever present dried frogs).
In the town, close to the ferry terminal, we found a nice big ground floor room, and we were even able to take the bikes inside (good thing, as things were wet from the rain and needed to be aired). Ernest went shopping for food and (surprise surprise) returned

Neak Luong is not a place where you want to linger, but our visas for Vietnam were only valid from the 25th and our bikes desperately needed attention, so we stayed for another day. We found a place to wash the bikes and Ernest gave it a thorough oiling.

As this is the place where all the busses has stop to cross the river, there are plenty of food stalls lining the road. The foodstuff will never fail to amaze me, as nothing is sacred and one can buy small deep fried birds, cooked turtles, crickets, you name it.

One interesting bit of information about Neak Luong, (I read somewhere) was mistakenly bombed by an American B52 in 1973. Many people (137) were killed and 268 were wounded. The US government offered to $100 to the families in compensation for each person who died, and fined the navigator of the aircraft $700.

A short ride to Svay Rieng, where we found a very comfortable hotel. We needed to spend the next two days there as we could only enter Vietnam on the 25th. We arrived early and took a walk to the local market to buy some veg and fruit (mangosteen and rambutan). Ernest also found some rice cooked in a banana leaf, with something inside (we could not seem to figure out what it was (it was however very filling and very sticky). There wasn’t really anything to do except to walk down along the river promenade with its foodstalls.

The interesting thing about rooms in Cambodia is that they mostly come with disposable toothbrushes and a comb (not disposable and mostly pitch black). Looking at the state of the combs they definably get used! Who on earth would use a well used communal comb?

Being a vegetarian, I always like to go into a restaurant and check what’s on the menu, but normally I’m hardly inside or I’m seated with a glass of ice in front of me. So, looking at the menu and pointing to an item asking what it contains (and the cost) often results in me having the prepared meal in front of me in no time at all. This normally results in Ernest having to eat two meals.
Posted by Leana Niemand at 8:41 AM