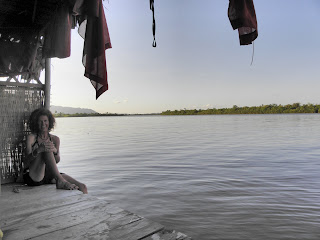 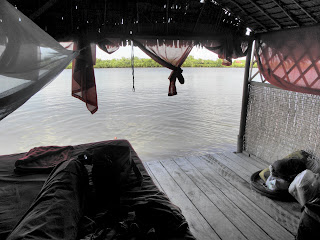 In Phnom Penh I met up with Ernest again. We did the usual thing i.e. laundry, internet etc. I also made use of the time to explore the well known markets of Phnom Penh. The markets are large and busy, selling anything imaginable, from rolls of cloth, meat, jewelry, dry food and veg. I was so inspired that I even bought some souvenirs for my family and friends back home.

Sending the parcel was however a whole mission in itself. The night before posting it, Ernest (in true Ernest style) securely wrapped and taped up the items in a box. The next morning at the post office they insisted on reopening the parcel to check the contents (Ernest volunteered to do the “opening” to ensure that it could be sealed again). Another problem was that the postage cost was many times that of the contents!

We also visited the Tuol Sleng museum (a former school converted to a prison and torture house by the Khmer Rouge regime in the 1970’s). In these forlorn looking school buildings thousands of people were detained and tortured to death, or sent to the nearby killing fields and buried there in mass graves. The visit left me in a dark and depressed mood and I did the only known cure for such a mood, I went shopping. I bought a brand new camera, as my existing one got wet a long time ago and has never been the same since.

Armed with my new camera we set off down the road. I clicked away all day, the photos were not all that good, but the quality unmistakable. What a small word, we met the New Zealanders John and Rosie and their son Dallas along the road, and stopped for a chat. The shoulder of the road disappeared at about that point, and for the rest of the day we cycled into the wind on the gravel next to the narrow busy road, which made for a rather slow ride. 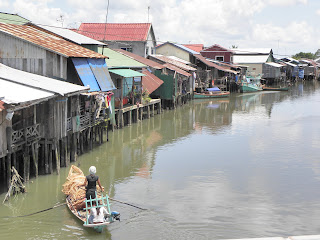 Once in Traeng Tratueng we could not make up our minds whether to go to the nearby national park. The 30km uphill ride and the fact that we would be directly into the wind made up our minds for us, so we found a room in the town.

This day we cycled into the wind again, and mostly on gravel next to the road. Luckily we missed the rain, as a heavy storm passed so close that we could smell the rain. Once in the junction town of Veal Rinh the taxi drivers came running with $ signs in their eyes, all offering us a lift to the coastal town of Sihanoukville. According to them it was too far to cycle (about 50 k’s), and there was no accommodation in town. We declined the offer of a taxi ride, and amazingly found a cheap guest house on the main road a few metres from where we were standing!

What a coincidence, we bumped into the New Zealanders again on their way in the opposite direction. It was a short and scenic ride to Sihanoukville, a large and touristy coastal town.
We arrived early and found a cheap room in Markara Guest House right across the road from Occheuteal Beach. Right on the beach there was a great restaurant where one could get a draft beer for around R4, and we sat there watching the sunset.

We spent a couple of days swimming and relaxing. I also took my laptop into town to have it cleared of viruses again. (Boring!!). We also did some things on the internet, but couldn’t seem to open our emails.

We were hardly on the bikes before we reached Ream National Park. It was far too tempting to pass by with only a glance. We found a basic room on stilts over the river, and rented an old wooden canoe to explore the nearby mangrove swamps for a couple of hours.

Our room had no running water or electricity, and the plank floor had wide gaps with the water below clearly visible (we had to be careful not to drop anything). However the view from the front deck made up for all that (the nearby local stilted huts, fisherman laying nets, passing boats, and the surrounding mangroves). That night we cooked our noodles while sitting on the deck watching the fireflies.

An extremely scenic ride along the coast, past river mouths and stilted fishing villages. On the outskirts of Kampot we headed straight for Bodi Villa, as according to the guide book it was a real retreat on the river. Our room consisted of a rather flimsy floating deck with woven bamboo walls, but what a view! We could just dive out the open river facing side of the room for a swim. Getting back on the raft (or in the room) was however a bit more difficult. Ernest complained of getting seasick, and as the place was booked up, we only stayed the one night.

Every now and then the strain of constantly being in each other’s company starts to show through. Although Ernest and I have known each other for more than 30 years, neither of us has previously lived permanently with a partner, and sometimes the reasons for that become very clear!

After an early morning swim, we packed up and cycled through Kampot town and were seemingly on our way to Kep (a “misunderstanding” ~ see previous paragraph). After some deliberation we returned to Kampot town where we found a more conventional and cheaper room. We did some laundry and relaxed, and for supper Ernest made himself some duck egg omelettes (I settled for something from our guest house kitchen instead!).
Posted by Leana Niemand at 7:13 AM