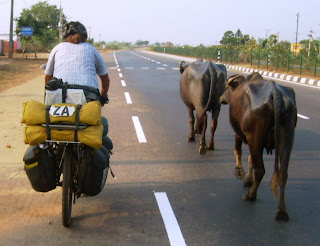 Whatever I suggested was not good enough, and in the end Ernest took off though the traffic to Varanasi with me in tow. Somewhere during the day he was bumped off the road by a truck, but fortunately there was some runoff space and he managed to keep the bike under control. It was a short, but hectic day on the road before we found a room in a fairly fancy hotel in Ara. However, we had a rather interesting time getting there, as we took the wrong turnoff and entered this large town from the back end.

In the morning TV and newspaper reporters were waiting for us downstairs as we were preparing to leave. After a long interview and some filming along the road, we were finally on our way. It was a laborious task for me to be cycling along a busy narrow road, to a place I didn’t even want to go to. The best part of the day was finding the Tourist Bungalow in Buxar, a friendly place with good clean rooms. The rooms even had a little balcony providing both air and light. What a pleasure the room was, I could even handle the loud chanting from somewhere nearby which carried on all night. This was either a holy man chanting or a wedding taking place - but whatever it was, the event will definitely NOT be remembered for the singer’s melodical voice! 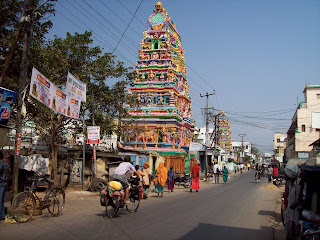 We cycled on in near silence, as we were not really on speaking terms. The busy road and poor road condition did not do much for my already dark mood. We reached Varanasi late, and what chaos it was. It’s a large and busy town with narrow and confusing alleys (fortunately Ernest had been here before). Just to add to my bad mood we managed to get a room in a guesthouse without any external windows, making it rather stuffy. The whole place was like a jail with very steep stairs leading to the upper rooms and bars across the windows and no natural light. On the bright side, the room was ridiculously cheap. 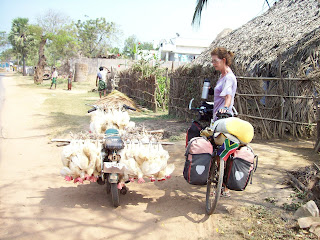 We stayed in Varanasi for a good few days as both Ernest and I had picked up a cold. During that time I also managed to see some if the sites, including a row-boat ride on the Ganges along the river ghats.

At last we left Varanasi, we got away fairy early (that means before 9.30). Ernest and I cycled together to Ghazipur where I headed North to Nepal and Ernest East - back to Patna to pick up his parcel from the Post Office. I suggested that we head straight towards Nepal, and he could take a bus to fetch the parcel. However, he was set on cycling back to Patna.

Being on one’s own brings a completely new set of circumstances. People seem to be even more interested in what I’m up to, and often they’re more helpful. One of the problems is always to keep the crowd out of your room - every now and again someone knocks on the door with an excuse, and then there’s half a dozen faces staring in.

A short but tiring ride, as the road was in real bad condition and very bumpy. A real pain in the ass! On reaching Gorakpur I managed to find a hotel. The best option is usually to go to the bus or train station, where there are cheap hotels and eateries. The room I found was not the cleanest, but at least it was cheap.
Posted by Leana Niemand at 10:41 AM