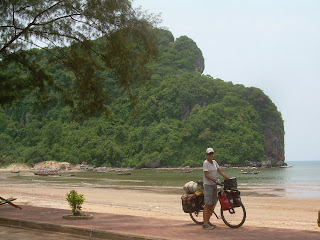 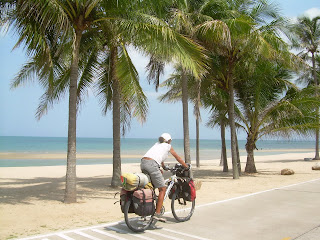 Modern Bangkok was a bit of a shock, there was no hooting and drivers obeyed the traffic rules, they even stopped to let you cross the road!! After months in India, it came as a bit of a surprise (a pleasant one).

The alleys of Bangkok however never failed to amaze me; here one could buy anything from amulets to secondhand false teeth and bridges! Chinatown with its narrow and crowded pavements offered everything from food to fluffy teddy bears and jewellery.

The river is still a major means of transport and ferries continuously run up and down the river. It was also easy to get around by ferry as one could buy a day pass and just hop on and off at the various jetties.

I was itching to get on the road, and it was far less stressful getting out of Bangkok that what it was getting out of any large-ish Indian town. Soon we were on the highway heading South-East. The heat and humidity, I could see, was going to be a major factor. It was boiling hot, even early in the morning, but just the fact that there was a shoulder to the good roads and motorists obeying the traffic rules made it a pleasured being out. We cycled past salt farms, which made me thirsty just looking at it.

We reached Samut Songkhram at around 15h00, and although still early, we decided to stay for the night. We found a room in a hotel with air-con, bar fridge, clean linen and TV!! What luxury!!

Unfortunately, we had to leave out luxury room with its air con and brave the heat again. We turned off the highway soon after we set off and followed a far smaller road along the coast. Ernest being the "highway-man", did not appreciate this but tagged along. Past marshy areas and small villages, until we reached the beachy areas of Thailand. No beaches where one could lie in hammocks yet (which I have envisaged).

Finding food was a bigger problem than I had expected. Being vegetarian is not a concept that the Thai’s understand. Cooked veg is considered a salad and a salad is not the usual green salad which I’m used to, but rather a lightly steamed crispy veg and noodles (chilli & sugar is added to most dishes, and if you say “no sugar” they look at you in amazement). Add to that the problem that we are now often out of the touristy areas, langauge becomes a real problem. (Ernest enjoys the food, with all sorts of meat and seafood in the dishes – sometimes a surprise or even a mystery).

Puk Tian Beach village we found a nice little bungalow, a block away from the beach. We went out for T/A food, but as expected Ernest had more success in this venture than what I did.

We were slow in leaving Puk Tian Beach, but eventually we got under way. Along the way we passed the resort town of Cha-Am where the locals were in full swing enjoying the Saturday morning at the seaside. We decided to carry on, and soon we reached the large holiday town of Hua Hin. It looked far too good a beach to pass by, so we found a guesthouse on stilts in the touristy area overlooking the ocean. There are not really any waves, but the breeze brings up a swell which laps under the wooden deck of the building.

The beach is lined with deck chairs where one can sit and sip a beer with the ocean at your feet. Hua Hin is also famous for its night food markets, where one can eat to your heart’s delight (again not for vegetarians).
Posted by Leana Niemand at 5:26 PM