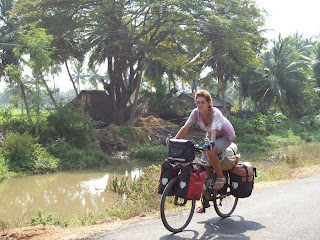 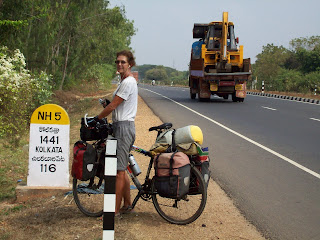 The day started with a prediction of a large hill looming ahead. The predictions varied between it being between 1km to 10km long. In the end, it was approximately 13km from Bundu and about 2km long. A truck driver (who clearly had some of the local liquor) insisted on having a photo with us. The scary thing is that few of these drivers have driving licenses, add to that poor road conditions, a little liquor and very narrow roads, it is a miracle that we made it to Ranchi without any incidence.

Once in Ranchi it was with great difficulty that we found a room. There were loads of hotels all along Main Road and Station Road, but none seemed to be willing to take foreigners. Eventually we found a rather over priced room and decided to stay for 2 days, in order to give Ernest time to recover from his upset stomach.

The day promised to be a climb up to the Hazaribagh Plateau, but none of it materialized, instead, we had a massive downhill. The road was nothing short of hair-raising, being fairly narrow and with loads of trucks flying past at high speeds. The area is known for coal mining and the black dust clung to our sweaty limbs. All this made for a rather stressful day and, I for one, was happy to reach Hazaribag (black face and all), where we managed to find a room at the first place we enquired.

Another stressful day, and I must admit, a rather awful day on the road. After 20 k’s we came across a victim of a hit and run accident. In passing we noticed an unconscious man in spasms lying next to the road, his broken motorbike and bags all over the place. We waved down a passing motorcyclist who fortunately had a cell phone to call for help. We could do little, as the person was unconscious and obviously seriously injured. It made me realized just how fortunate we are to arrive safely at our destination every night. We reached Bodh Gaya in good time, found a good room and retired for the night.

Bodh Gaya, where Buddha reached enlightenment, is a very peaceful place. The entire village is set around the Old Temple built at the site where Buddha sat under the tree. The original tree is long gone, but a sapling of that tree is planted in its place – which is also now a large old tree. We also spent the following day wondering around the various temples and gardens. It was “Holi” day (Hindu day), a national holiday in India, and children were running around the village painting everyone with coloured powder and spraying red and green water at everyone.

Another hectic day on the road, cars just pull into the road without looking left or right. As I overtook a stationary car, it pulled into the road, fortunately it only knocked one of the panniers off the bike and then still proceeded to nearly drive over it. Entering Patna was just as hectic with heavy traffic but eventually we found the city centre and a room. We enquired at many places before finding a budget hotel which accepts foreigners.

We stayed two nights, as Ernest had to pick up the parcel with spares which my sister Amanda had sent. Only 1 of the 2 parcels had arrived but with too many of some things and other things missing.

A major disagreement took place between Ernest and myself, with him not wanting to wait in Patna for the next parcel - instead he suggested that we cycle to Varanasi and back again (a distance of over 500km). I’d had enough off the heavy traffic and preferred to stay put and wait for the second parcel.
Posted by Leana Niemand at 10:39 AM