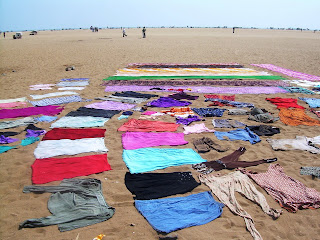 11th December
Agonda - Karwar
56km
At last, we dragged ourselves away from Agonda heading further south. We even had time for a lunch along the way at a 10th of the price of the tourist areas. We turned down to Devbagh beach only to find that there was no accommodation except for a very expensive resort. It is absolute heaven as the area is very remote with no roads leading to the resort. We cycled along the sand to find it, sadly, we had to leave again and found a room in the town of Karwar. Amanda was very tired again and just passed out on the bed after we settled in. Poor Amanda was taking strain as she was desperately looking for something to eat which does not contain curry, but to no avail! 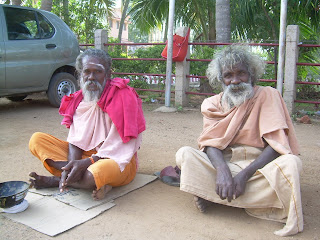 We left early and the weather was pleasant, not too hot, and the road not too hilly. Amanda felt nauseous again. We still had 10km to go before we reached Gokarna when she puked next to the road again. Nothing else to do but to battle on. Eventually we reached Gokarna and booked into the first Hotel we saw. I real nice hotel for 275rp (less than R60) for the room. The town was interesting with a good few temples and lots of pilgrims and rituals.


13th - 15th December
Gokarna - Om Beach
6km
It was a short but very hilly 6km to Om Beach, which is a small beach tucked away behind the cliffs. The place was packed with tourists for obvious reasons - beautiful beaches and good food. We stayed at Namaste guesthouse but there are also other places to stay along the beach. 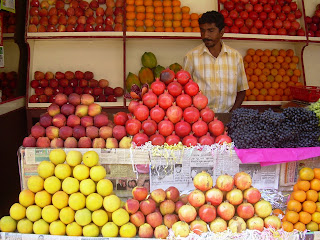 The previous night we organized a boat to take us across the estuary instead of cycling the 6km over the hill and then a further 10km to the main road. So, on the spot at 9h00 our boatmen were there. Amanda had a kind of panic attack on the boat but stopped short of jumping overboard. Arriving on the other side there was a small wave which lifted the rear end of the boat a bit, at which Amanda let out a yell and hit the deck, the boatmen stared in total amazement and wanted to know if she was OK? Finally, we were safely out of the boat and on the beach. We cycled on the Murudeshwar with its huge Shiva statue on top a little hill overlooking the beach. Here we were definitely out of the tourist area and we were back to swimming fully clothed again. We found a cheap room but proceeded to spent what we’d saved on the room rent - supper at a fancy resort (all so Amanda does not have to eat curry once again).
Posted by Leana Niemand at 8:30 AM