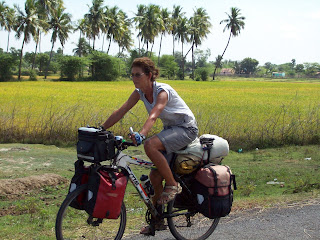 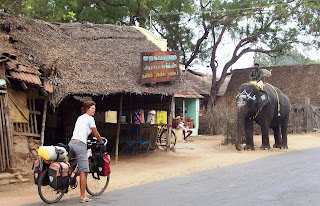 1st January 2009
NC Gardens Beach Resort - Chavakkad
72km
Amanda was strong and we settled into a good rhythm. After 20km, we stopped for our usual breakfast. Amanda is really getting fit and so we pushed on to Chavakkad. Just once, I heard her swearing under her breath after her bike zigzagged through the loose sand and then headed for the bushes. She recovered and soon after that we reached a river where we had to take a ferry across again. Water phobia or not she pushed her bike on without saying a word.

We found a room on the beach for Rp 500, which we considered far over-priced, but we took it anyhow.

2nd January
Chavakkad - Cherai Beach
64km
An easy and relaxing ride to Cherai Beach, which turned out to be closer than expected. Once there, we went from one set of rooms to the next, all seemed way above our budget. This is a real touristy place so everything is quite expensive. In the end, we found a room for 750 Rp. While Amanda and I went for a swim in the ocean, Ernest cooked pasta in the room, so at least we saved on food. The beach was packed with holidaymakers, mostly Indian families. Swimming in a bathing suite is quite a daring thing to do there. Although Amanda and myself walked way down the beach for our little swim, spectators (cell phone camera in hand) appeared in no time. By now, our pictures must be on half the cell phones in India!! And that looking the way I look (bed bug eaten and half bald). For some reason my hair is falling out at an alarming rate, and I am socked at how little hair I have left.

3rd January
Chenai Beach - Fort Kochi
28km
Although Chenai Beach is a cool spot to hang out, we moved on as the accommodation is a bit too expensive for us. It was only a short pleasant ride to Kotchi, with the Arabian Sea on the one side and the Kerala backwaters on the other. It was a short ferry ride across the inlet to Fort Kochi island (the city of Kotchi - formerly Cochin - consists of a number of islands). Fort Kochi had a real relaxed feel out it. Accommodation was again not cheap as it is a popular place for tourists. As we arrived early there was plenty of time to wander around and watch the locals operating the famous Chinese Fishing nets - a contraption which looks a bit like a spider web which they repeatedly dip into the water at high tide.

That evening we were also lucky enough to see a Kathakali show, which is story-telling through drama, music, dancing and hand gestures (or something like that). The costumes, make-up, and headgear is quite something, and I believe it takes anything from an hour upwards to complete dressing.

4th January
Kotchi - Alleppey
66km
Once again, it was a ferry ride from Kotchi to Ernakulam, the twin city on the mainland. Fortunately it was Sunday and the traffic was not too serious - we got through the city without any problems. We cycled past palm trees, temples and shrines until we reached the town of Alleppey - known as the Venice of the East. The area is famous for backwater cruising and houseboats, so we decided to stay the night and find out what the cost will be to do a trip on the backwater. Our accommodation was cheap at R30 for a double room and R16.00 for a single room. One cannot expect much for this price but at least the room and bedding was clean.

5th January
Alleppey
Amanda and myself look the public ferry from Alleppey to Kottayam along the backwater - a taxi ferry stopping all along the way to pick up and drop off people. We cruised past numerous villages, rice fields and palm trees. We had about an hour and a half to walk around Kottayam and get back on the ferry for the return trip, a 3-hour ride.

6th January
Alleppey to Kollam
By ferry
Instead of doing a houseboat-cruise, Amanda and myself decided to take the State ferry South along the backwaters to Kollam (while Ernest cycled there). What a scenic and leisurely way to get to the next town!! We spent the entire day on the ferry, which stopped once for lunch and once for tea. Again, we saw many villages with villagers going about their business. These waters are used extensively by the locals, not simply for washing themselves, but for laundry, dishes, etc. Fishing seems to be the most common activity and the method varies form Chinese fishing nets to hand nets. We only arrived in Kollam at 6.30pm and it was already getting dark. Fortunately Ernest on the bike beat us there with hours to spare - he’d found a room and bought food, which he was preparing when we arrived.

7th January
Kollam - Varkala
36km
We took a leisurely ride to Varkala, which which was only 36km away. We stopped along the way to do some shopping and pick up something to nibble on. Once there it was the normal search for a cheap room. We were lucky to find a room big enough for the 3 of us at Rp 300 (R60.00). Once again Ernest’s job was not done for the day and spent most of the afternoon working on Amanda’s bike.

8th January
VarkalaWe decided to take a rest day to do laundry, internet, and perhaps spend some time on the beach.
Posted by Leana Niemand at 8:37 AM