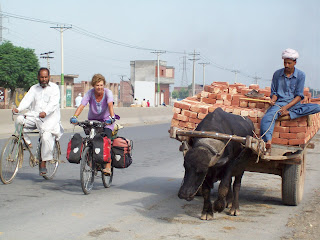 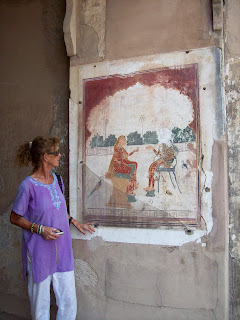 We said good-bye to our friends in the campsite and got on the road to Lahore. A fairly easy ride as the road is so much smoother than the KKH (that does not mean its perfect). It was still very hot and humid but it always appears to be better on the bike as at least there some air movement. The roads were also not as busy as usual due to Ramzaan. Most of the roadside truck stops and petrol stations, or CNG stops (they use compressed natural gas instead of petrol) were however open so there was no shortage of something to drink along the way. The road south was fairly level and we reached Jhelum in good time where we stayed in a local hotel. Even they wanted to give as breakfast at 4h00, which we politely declined. One thing about the local Pakistani hotels is that they clearly indicate the direction of Mecca, and rooms come not with towels but with a prayer mat.

After our own, much later, breakfast of peanut butter sandwiches, we left our room in Jhelum. In the early afternoon we encountered one of the biggest storms to date, first with a howling dust storm and then thunder and lightning and hail!! We look shelter with the locals and after about an hour it cleared and we could be on our way again. It was still drizzling but at least the dust settled and we could see where we were going. When it started pouring again, we pretended we were rich tourists and booked into an overpriced roadside hotel (still with dirty sheets and broken bathroom fittings!).

It was a fairly quick ride in to Lahore on a flat but very bumpy road (work in progress) Here the road passes through numerous busy markets with chaotic traffic. The area is not unlike Africa with cakes of buffalo/cow dung being dried next to the road for fire, and each and everyone on a bicycle racing you. It’s normally not long before a chain or peddle comes off, or otherwise they normally tire after a few minutes. Cycling into Lahore is another item that could be considered for “Fear Factor”!! The streets are jam-packed with vehicles, animals and people of all shapes and sizes and as far I can figure there are no rules, just go!! It seems important to make as much noise as possible, and for us on the bicycles every 10 metres of safe progress felt like a major accomplishment.

We found a reasonable place to stay in Anarkali market with its narrow and winding ally’s. Not only do you have to dodge the rickshaws and other traffic but also the cricket balls flying everywhere, as it’s a game played on every pavement, street or open area. We wondered around and visited the old city, fort and mosque. We and ate from the street stalls, which are everywhere, even although it’s Ramzaan. The air pollution is tangible, and Ernest picked up the dreaded “Lahore Throat” (which turned into a bad cold later).

Posted by Leana Niemand at 4:34 PM