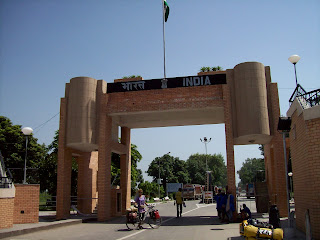 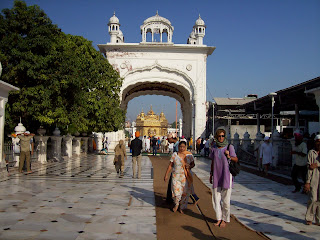 It was a 35km ride to the border, which was modern, efficient, and unexpectedly quiet. From the border it was another 30km to Amristar. What a great place!! As we cycled into town there was a parade, elephant and all!! Well, this is India after all. This is the land of the Sikhs and there are turban-clad men everywhere. We headed straight for the well known Golden Temple, and what a sight!! Amristar is home to Sikhism’s holiest shrine, The Golden Temple. There were thousands of pilgrims, with free accommodation and food for everyone. The atmosphere inside is truly spiritual and one must remove your shoes and cover your head before entering. The main temple is covered in gold, and stands in the middle of a sacred pool. Music is played all the time and devotees dip in the pool which is suppose to have healing power. While I soaked up the tranquil atmosphere Ernest went off in search of the local beer (something we haven’t had for more than 3 months), and on returning he nearly got kicked out of the dormitory where we stayed in the temple complex.

After breakfast at the Golden Temple (sitting in rows on the floor with hundreds of pilgrims), we left for Jalandhar. The road continued west and it was a short and easy ride. The countryside is green and as expected there are many cows everywhere. It was refreshing to see so many women out and about. Although they still wear the Shalwaar Kameez, they do not cover their hair. There are also loads of women riding scooters and bicycles, something one never saw in Pakistan or Iran. Seems like I will still be wearing the Shalwaar Kameez for a while. We found a cheap room just before Jalandar which was like an oven. It appears that here the power cuts are mostly at night, so no fan!! 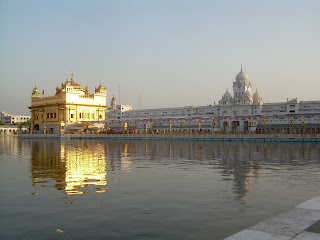 What a pleasure it was to be on a flat and smooth road. The weather was still hot and humid and at times it felt like one was breathing pure watervapour!! At least the countryside is nice and green and with Ernest having a bad cold it’s a good thing that it was not too demanding. Another major problem is his broken wheel rim, which is now looking worse for wear and will not last much longer. We tried to fix it along the way, but it was no better than before. Hopefully there will be something one can do in one of the bigger cities. We found a Youth Hostel in Roper which has also seen better days, but provided cheap accommodation for the night. 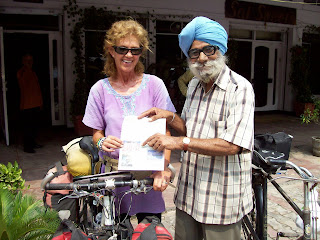 Ten km after we left we stopped for breakfast (Dhal and chapatti with a small salad) Not much further Ernest had a flat wheel again, due to the broken rim. Only a few k’s further the same thing happened again. A local man took Ernest (and rim) on his schooter back to the previous town, without success. He then loaded our bikes and us on a truck for the 20 km to Chandigarh, where he dropped us at our hotel and even found a bike shop which had a spare rim (not the same quality, but better than nothing). I used the time to find a new sim card and do some shopping for the usual shampoo and toothpaste. In the meantime Ernest made some new friends in a popular tavern.

We managed to find a professional bike shop and Ernest found a rim, cycle computer, decent tubes and tire sealant (very important). We also visited the well known rock garden created by Nek Chand, a 20-ha garden with walkways, staircases, waterfalls and figures all made out of junk, a truly fantasy world. We were also lucky to meet the well known Mr Narinder Singh, a retired civil servant who now welcomes tourists to Chandigarh, showing them cheap places to stay and eat. Nothing is too much trouble for him, and he also recommends places of interest in his home town.

After Narinder Singh took me to find a detailed road map, we left Chandigarh. By that time it was already 12h00. At one stage we went up and down the same road a few times before finding the small turnoff we were looking for, and we were further delayed when I had a puncture. The road at first was flat through green landscapes until we reached the village of Narayangarh. We were in for a surprise as the next 30km was steep uphill through some of the most spectacular countryside one can imagine. The going was slow, so we only reached Nahan about 2 hrs after dark, a hair-raising experience on a very bad and narrow road with lots of trucks and busses. Nahan is away from the regular tourist route, but has an interesting old town with narrow alleys and many Hindu temples and shrines. There is also a sacred lake in the center of the town. As most people know cows are holy in this part of the world, and these animals wander around the town at leisure – the way stray dogs and cats would do in other places (even sleeping on the pavement outside the doorways of shops).

After our late arrival of the previous evening we spent the day wondering around the old city and resting our tired legs. Ernest was becoming a bit concerned about the girls calling him “Uncle”, so he shaved his beard again for the first time in more than 3 months. We did some laundry and hung it on the hotel roof to dry, but the ever-present local monkeys took a liking to some of the items (one of the hotel workers had to climb a big tree in order to retrieve a shirt, which had a hole bitten in the back).

Once again a beautiful ride through the countryside. Villages are close together with busy markets, and at times it feels like the country consists of one large village. Finding the way is not always that easy as most road signs are in the local alphabet, so we had to constantly ask for directions (not always very accurate). Again, Ernest had problems with punctures as a tyre was damaged by the former broken rim. So, it was dark by the time we arrived in Dehradun. The streets were jam-packed with rikshas, motorcycles; bicycles, people and animals (all acting crazy), but eventually we made it to the hotel we were looking for.

I’m plagued with stomach problems and it was better to stay the day. We used the time to visit Tapkeshwar Hindu Temple, which has an unusual shrine inside a cave. We also went to the “World Peace” Stupa and giant Buddha statue. The stupa is in a Tibetan community on the outskirts of town, and is a multi-storey structure consisting of shrine rooms with fantastic murals and Tibetan art. The bazaars of Dehradun are crowded and full of colour, with women dressed in the most beautiful saris.

The late monsoon weather caught us, and we awoke to an overcast and rainy day on the 19th, which continued through the following day. Floods were being reported from all around India. We waited it out, watching endless TV re-plays of India winning cricket matches and reports on the Delhi bomb blasts from the previous week. 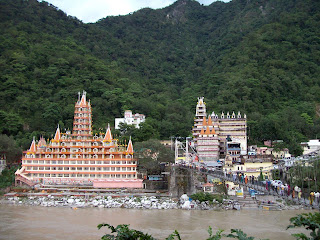 At last the weather cleared and we set off for Rishikesh, again a beautiful route to cycle, past villages and green fields. We reached Rishikesh early as it was a very short ride and found a real good (cheap) hotel right on the Ganges River overlooking the 2, 13-storey temples across the Lakshman Jhula suspension bridge.

Rishikesh is considered the Yoga capital of the world, as there are masses of ashrams and kinds of yoga and meditation classes all over town. The town has an exquisite setting on the banks of the Ganges and surrounded by forested hills, couple that with the constant ringing of the temple bells and Hindi music being played all the time, it sets the scene for some real soul-searching activities. No sooner had we arrived when I started feeling really ill, it was so bad that I sought the help of a Yoga and Natural Therapist (whatever that is). So the verdict was mal-digestion, low blood pressure, sluggish circulation and slow metabolism (well I felt ill enough to believe everything). So, I left there armed with a list of what- and what not to eat, as well as a bag full of (unpalatable) herbs.

Posted by Leana Niemand at 5:23 PM