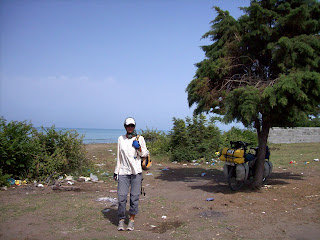 It was time to put the burka on and head for the boarder. The border crossing into Iran was no less hectic than others (no-mans-land was a bit of an obstacle course, and we waited for ages before being cleared to enter). Border officials made sure to tell me to cover my hair. There was also some misunderstanding regarding whether we needed documents for the bicycles. Once in Iran we discovered, with a shock, that there was no ATM or bank where one could draw money. If only we knew this, we could have drawn money in Azerbaijan. 0n top of that I still had to spend my last bit of money on a head scarf and long sleeve shirt, as here it is law to cover yourself from head to toe. Another male chauvinist society!! I can’t believe I chose to cycle through another Islamic country. Here it is even worse than in the other countries, with people totally discounting me, and only speaking to Ernest, as if I don’t exist.

The scenery is however lush and green and one can hardly believe you are in Iran. They even grow rice!! The coast along the Caspian Sea is rather dirty but still a nice place to stop and have a break.

I friendly man in a large town bought us some cake and bread (in exchange for an interview – he was a local newsreporter), and then proceeded to take us to the beach were we could camp. Unfortunately the beach was right in front of the promenade, so we had a constant procession of spectators till late that night. The people here seem to live at night, as it is extremely hot in the day. So no rest for the wicked, I could not even take off my headscarf and long sleeve shirt. Definitely no washing tonight.

We woke with women walking and jogging on the beach, fully covered which is quite a site. They must be dying of the heat. Ernest fried himself some eggs for breakfast and that drew even more spectators. We lost our way a bit as we wanted to cycle along the coast but found ourselves on an inland road. Eventually we came out at the coast again. We also, for the first time, saw a women driver. She even stopped and gave us some fruit. Camped on soccer field between the coast and the road. If only one could have a swim!! I’m getting really fed up with this headscarf and long pants and long sleeve shirt. I’m hot stinky and my head itches.

No a bad day, all along the coast with a slight tail wind. Got invited into a tea house were we had tea and mint flavored yogurt (not so nice). Camping places change from country to country. Here one can also camp at any given spot but the most popular seems to be at a mosque. So we set up camp at a mosque and found that there were various other people also camping there. The main reason is because there is water and toilets as well as a nice lawn. We have turned away from the coast on the road to Tehran. Immediately it was not as humid as at the coast and a bit cooler. 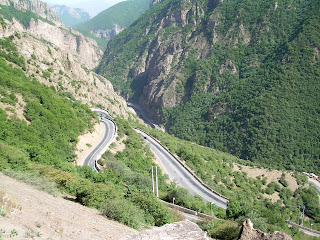 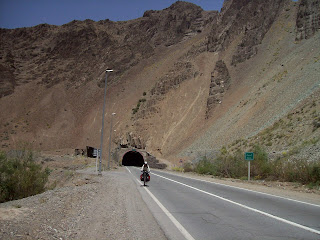 This is summer in Iran!!! It is stinking hot, as we cycled the short distance into Tehran. What a busy and large city! Eventually we found a cheap hotel (The Mashhad Hotel) and lo-and-behold, we bumped into Martin there (who we met on the ferry from Sudan – and last seen in Cairo). Now it was time to try and get money sent to us and to sort out some visas. Just to find that they have sent the LOI for Uzbekistan to Baku instead of to Tehran!! To redirect it to Tehran will take a further 5-7 days. My sister, Amanda, had a battle of her own to try and send money to Iran. What a performance, now we just need to wait for it to arrive and wait for the LOI for Uzbekistan to come through.

We decided to also look into the possibility of cycling via Pakistan and India to China, which should be less of a visa problem.

We waited and waited, but no LIO and no money, every day I’m at the bank, just for them to tell me it is still not there!! We also applied for a Pakistani visa and even that is taking forever!!

Everyone at the Mashhad Hotel is in the same boat, everyone is waiting for something. There is not really a reason for staying in Tehran other than getting visas. It is extremely hot and one can do little more than lie in your room and wait. The air is so polluted that one can’t even see the surrounding mountains, I’m sure it is also the reason for my constant headache.

What a strange country this is!! There is no satellite TV or even ADSL lines, so the internet is all still dial up. Definitely no alcohol, but I understand that it is easily available if you know the right people. One thing about the Iranian people is that they are extremely helpful and there is constantly someone asking if they can help you find a bus, taxi or metro.

After a week of waiting I received an email from my sister, Amanda, saying that the money has been returned to South Africa and that there is no way of getting money sent to Iran!!! Now our situation was desperate. We have already reverted to eating bread (nuun) and water and we have not paid for the hotel for the past 5 days. We heard about a travel agent that can arrange money via a Dubai account, so we went to see him. He proceeded to give us 300US dollars and said we can pay it into his account!! What trusting people the Iranians are. Well with the money we could pay for our hotel as well as the Pakistani visa. What a relief!! Still not enough to get us to the border, which is app. 1500km from Tehran. By this time there was hardly enough time left on our visas to make it to the border. As in theory we now had to do app. 150km every day to make it to the border in time.

We left Tehran as early as possible but already the heat was stifling. As if that was not bad enough, we were also cycling into a head wind. Maybe cycling though Iran to Pakistan in the height of summer was not such a smart move. The heat appears to be at its worst between 14h00 – 18h00. It seems that one can just not drink enough water to keep hydrated and the warm water makes me feel nauseous in the heat. We managed to do 124km before camping at a rest area with petrol station and restaurants.

Once again we woke at sunrise and left as soon as possible, but that made no difference, as the heat soon became quite unbearable. I drank as much as possible but it only proceeded to make me more nauseous. I felt weak from an upset stomach but we battled on against a head wind (again). The going was really slow (due to me) and I felt that Ernest was getting a bit annoyed with me for going so slowly. He wanted to get to the border before our visas expired and was not keen on taking a bus. I had no energy left by the time we decided to call it a day, and to crown it all I proceeded to puke right in front of the people!! How embarrassing!!

By the time we left that morning I was still not feeling well, and quite weak. As we had little money we only had a tin of beans to eat the night before. After a short while I realized that I was holding Ernest up, and he did not want to stop to rest.

So, at a Toll gate I decided to wait for a bus while Ernest carried on. It was a long wait for a bus going in the direction I wanted to go. Eventually a bus arrived which appeared to go quite close to the Pakistan border. The bus drivers were extremely nice and only charged me 8000 toman (less than 10 U$). On the bus I met Fariba, a very nice lady living in Kerman. She invited me to stay with them for the night. The bus only arrived in Kerman at around 1h00. So I accepted and even had a nice shower. I slept on the sofa and Fariba and her husband, Mehran slept outside in the courtyard.

We only woke at 9h00 and had breakfast consisting of bread (nuun) cheese, nuts and halva. Fariba escorted me to the bus station, where I got a bus to Zahedan. On the bus I met another very nice student, Nargess, on her way home after the closing of term (the bus ticket was 6 000 Toman). I know I’m going on about this, but the heat was truly unbearable (like Southern-Namibia in December). From Bam the road crossed the desert and there appeared to be very little water along the way. (Hope Ernest will be all right). The scenery and structures resemble Sudan so much one can easily think you’re in another country. Once again the bus only arrived at around 24h00 in Zahedan and Nargess invited me to come and stay at their house. What a luxury house it was. Double storey with air-con!!! Communication is quite hard as they do not speak English and I no Farsi.

The people of the house only rise at around 10h00 – 12h00. Here everyone lives at night and sleeps in the day. This is about the best thing to do as the heat us unbearable in the day. They fed me until bursting point with rice, noodles and fruit.

They insisted on me staying another day, so I used the opportunity to do some laundry and just lay about. Once again I was fed with all kinds of food. Wow, one can only eat so much and no more.

I insisted on leaving for Pakistan, but there was no way they wanted me to cycle to the border, apparently it is not safe!! So they insisted that I take a taxi, they even paid for the taxi!! There was no way they would except my money (I still had a bit left), so in the end I gave up and got on the taxi for the border, loaded with a huge bag of food. The drive to the border was through a real moon-scape area. At last I was out of Iran, although the people are extremely helpful and friendly I did not like Iran as much as the other countries, must be my anti-authoritarian attitude!!
Posted by Leana Niemand at 10:52 AM

It's Elahe, an Iranian.
Sorry to hear you didn't like my country that much, but as you said it's not about Iranian people it's about Iranian rules against women. Yes, we have to put on hijab and it's not our choice. But we do have a very beautiful country with nice people.

I hope you come back here and don't let a bad rule (HIJAB) make you not spending time with such a nice people and visiting other sights of Iran...