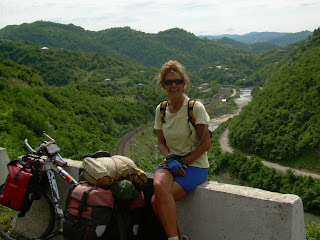 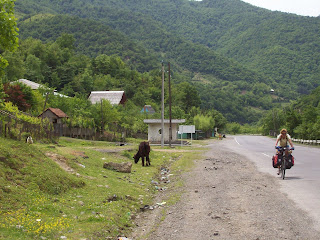 At last we left Tbilisi and cycled off to the border, a fairly easy ride of about 60km, and got out of Georgia smoothly. Things were a bit more haphazard on the Azeri side, and our passports went from one person to the next until, eventually, we got our entry stamps. We met a Chinese cyclist at the border who has been cycling for the past 11 years!! After having some tea with him we cycled on for about 40km till we reached Qazax, where we camped in the garden of a run-down restaurant.

The time has moved on another hour so now it gets dark really late, which gives a real long cycling day.

24 May - Qazax - Ganca - 100km
The road is fairly narrow with a very poor road surface and it is mostly better to cycle next to the road on the gravel as it is not as bumpy. A head wind did not make it any easier either. Spring seems to be over as now the days are getting quite hot. In the evening we found what is called a "Tir Park" (truck stop), where one can have a good shower for about a dollar.

25 May - Ganca - Yevlax - 120km
The road is rather uninteresting, but Ernest insisted on coming this way instead of taking the scenic road (we had a lot to organize in Baku - so he didn't want to waste the available time). The road surface is still very bad and bumpy and we still cycled into a head wind, all this does not particularly make me very happy. We found the local people a lot more open and friendly than in Georgia. Stopping anywhere along the road, normally means that people come from all over the village to look and enquire where we from and where we going.

The language is a lot like Turkish so we can at least tell them where we from and where we going to. Just past Yevlax we stopped for tea and met the Turkish road workers, working on the new road, they in true Turkish style invited us to come and camp at the site. We hardly had time to pitch our tents and food arrived.

26 May - Yerlax -123km
We had to pack up early as we were camping in the car park and people were coming to work. Once again breakfast arrived as we were packing up. Well good thing we had breakfast as it turned out to be another frustrating day into the wind, in the heat and on a bad road, give me strength what I am doing here!!!

The village people stare at us in amazement (I don't think that a lot of tourist come past these areas) they are truly fascinated and we hardly ever pay for tea, as by the time we leave someone has already paid. The most amazing thing is that about everyone has a full set of shiny golden teeth, must be the fashion around here.

We struggled on for 123km before we set up camp behind a petrol station, great place overlooking a dam but it came with a big, big mozzie problem. No sooner have we pitched our tents when we noticed a number of snakes in the dam!!!

27 May - Alat - 88km
It feels like our problems are never ending as we encountered a real strong head wind. At least the road has improved. All the time people wave us in to come and drink tea, which is not just served by the glass, but comes in a pot. So we normally sit for a while and chat (if that is what one can call it, seeing that we can say about 5 words in the local language).

We reached the coast at the Caspian Sea which is by far not a romantic coastline as it is littered with oil related industries and pipelines. We camped next to the road again and found later that it is next to a rubbish dump!!! I'm getting rather tired of being dirty and it feels like I need a normal life for a while. I'm covered in, mozzie bites, haven't showered for days and have run out of deodorant!!!

28 May - Alat - Baku - 68km
A short ride into Baku, along the coast, with oil riggs, pipelines and factories. The area around the coast is very barren, soon we reached Baku which is a real oil boom town with large modern buildings, and loads of designer stores, what a contrast to the rest of the country. We booked into the Canub Hotel which is the cheapest we could find. The rooms are large but old with torn bedding and a rather sloppy floor!!! At least there was a shower with hot water, which was the most important thing at the time.

Now the big search for visas started. Getting visas for central Asia is not that easy as one needs letters of invitation for most of those countries. This can be arranged on the internet but takes time, a full itinery and money.

All we achieved, after a week in Baku, was getting a “Letter of Invitation” for Uzbekistan. This is at least now arranged and paid for. Seeing that this process takes 10 – 12 days, we decided to cycle to Central Asia, via Iran, in order to pass the time. The visa for Iran only took one day, but we were nearly flattened in the process. You need to shove and push your way to the front. That’s not the end as then you need to stand your ground firmly in order not to be pushed away from the windows again.

At last we packed up and cycled off, just to find that Ernest’s rim was broken!!! So off to the bike shop, which we found at the Velotrek. Good thing Ernest carried a spare rim. I thought he was crazy, but now it come in handy. I also used this opportunity to have my bike serviced.

Now, we were really on our way, with a good tail wind, we headed for the south. After about 110km we spotted a sign for a nature reserve. We stopped to enquire and were welcomed in. We were even offered the guest cottage, only paying the small park entry free. What a pleasant surprise. Loads of gazelle and birds, in the park, even flamingos!!

The road deteriorated, was very narrow, busy, and with a poor surface. Add a head wind to that, and it makes for some frustrating cycling. Still we were called in for tea on various occasions which we gladly accepted. The countryside is a lot greener now. Fruit stalls were once again found next to the road, and we were given a whole bag of fruit by one of the stall owners. We were even filmed by the Azeri TV. All this took place without us speaking a word of Azeri and them speaking no English. We camped next to a teahouse under the trees with lots of spectators. All coming to see what 2 crazy people on bikes are doing.

The bad road continued and we once again encountered a head wind. The scenery became really lush and green with lots of trees and high mountains in the background. The road made a loop inland and came back to the Caspian Sea. About 10km before the border we stopped and camped behind a petrol station. The whole village must have come to have a look at as. There is definitely nothing romantic about camping between old oil cans and rubbish with petrol fumes up your nose. At least there was water and a sort of a toilet, which Ernest rightly said could easily feature in Fear Factor.
Posted by Leana Niemand at 8:40 PM