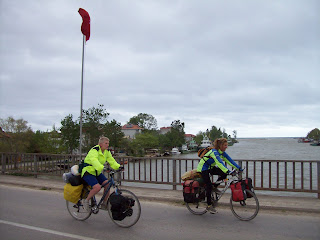 It took nearly the entire day to get out of the city and over the suspension bridge across the Bospurus, (were I am quite sure we are not supposed to cycle) Esther did not even fall off her bike once but did wipe out a few cars along the way!! The going was rather slow as the countryside is extremely hilly and we managed to do 45km before we found a picnic area were we camped for the night. Esther did real well for her first day.

We only left at around 11 the next morning and once again found the road extremely hilly on our way to Şile. Esther freewheeled down the hills and pushed her bike up the hills, the heat was also a bit much for a Scott coming straight from the frozen north. Once again she did real well for someone not use to cycling.

From Şile we cycled on to Agva about 37km, where we met two lady cyclists from Amsterdam (Julie and Mayo) also on their way to Beijing. We camped close to the beach under some trees.

The next morning we cycled off together through the most exquisite countryside. The weather was much more suitable to Esther's liking (a bit overcast) and we managed to do 67km. That night we all camped together again. 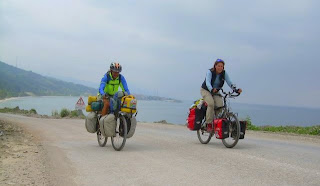 On the morning of the 24th we packed up and left late again, we are getting really bad, leaving between 10 and 11 in the morning!! We followed country roads through farmland and tiny villages until we reached the coast again. Everywhere we stopped tea was being offered so there is no quick stop and on your way again. In the tea drinking process we missed Julie and Mayo. The weather changed and became real cold and after 81km we found a sort of a campsite in a small village where we could hide out of the wind.

The next morning was still freezing cold and we cycled the short distance into Akcakoca about 18km and found a room with a great view of the Black sea. At last we could shower and rinse some clothes. That night we went out to a restaurant, which Esther paid for (in fact she has been paying for everything since she arrived!!). The next morning our clothes were still wet so we stayed another day.

My camera got wet and stopped working, but seems to be coming back to life again, so there may be a serious lack of photos for the next few days. At last we reached a fairly level bit of road, all along the coast to Eregli, it was, however, not to last and immediately after Eregili the road started climbing steeply away from the coast. We managed the mountain and just as it was time to look for a campsite we found another picnic area. In true Esther style she started chatting to a local family having a picnic and they promptly started feeding her, a feast of chicken, salad, bread and tea. The mist came rolling in and it became freezing cold in the night.

A good downhill ride into Zonguldak with fantastic scenery both along the coast and in the mountains. We reached Zonguldak early and found a hotel. Unfortunately Esther was to take the bus back to Istanbul the next day(how quickly her time has run out).

Esther's bus left at 13h00 and we managed to get both Esther and her bike on the bus without a problem. I was sad to see my friend go and will miss her dearly. Ernest and myself cycled on to Bartin about 67km. We cycled via Filyos, and extremely hilly ride on a partly gravel road with narrow hairpin bends and loads of tıp-trucks!! After Filyos the road leveled out as we got back onto the D10. 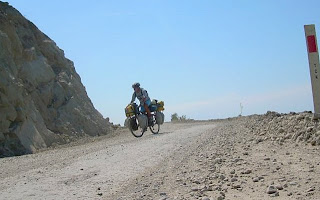 We woke to a beautiful sunny morning and encountered more hills, we stuck to the shores of the Black sea, and shortly after lunch we met up with Julie and Mayo again. So for the next few days we cycled together up more hills along narrow roads with numerous hairpin bends.

The going is really slow, and although a person goes up and down the down is short and quick. We camped on the beach and made a good campfire to keep us warm. 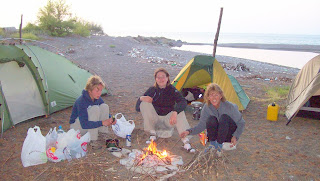 After another hilly day, Ernest had a flat tyre which is always a hassle but he fixed it quickly while the rest of us sat watching the dolphins. Julie and Mayo bought some fresh fish at the market in Abana and that night we made a campfire on the beach and cooked a great meal.

We must be getting used to the hills because the stretch from Abana to Ayancik did not feel that bad and it was quite a pleasant day on the bike. The sun was out but not hot and one can only be amazed at the scenery, very densely forested on the one side and the blue Black Sea on the other side. At Ayancik we stopped to do our usual shopping for the night and then cycled on for about 5km where we found a little beach to pitch our tents. No sooner had we pitched our tents and the locals arrived with fish and salad.

The Black Sea was lying like a big lake, not a wave in sight as the 4 of us loaded our bikes. The road was no less hilly that the previous days and now it started raining as well. We reached Sinop frozen and soaked to the bone. We found a cheap hotel and all had a shower (first in days) and set off for the nearest restaurant. Mayo and July took the bus further along the coast to Trabzon, as they have to enter Iran by a certain date and were running out of time. Ernest and I decided to stay in Sinop for another day to do laundry and ınternet.

It was still overcast and freezing cold. The last thing I felt like doing was getting up and on the bike. At least the wind was behind us and the hills were not as fierce as the previous days. We made good time and even encountered a bit of a level road. We made good use of the favourable conditions and carried on cycling till after 5. We found a friendly farmer along the way and camped in his yard. Made pasta and soya with mayonaise that night. Yummy.

To our dismay we woke and found that the wind had changed 180 degrees. Now it was coming straight from the front! It, however, calmed down and it was another fairly flat day, so we could make up some distance. We even found a Carrefour Supermarket and could stock up for the road ahead. Various cups of tea was again enjoyed along the road. As the day came to an end we camped next to the Black Sea in a picnic area under big pine trees.

A beautiful new road, flat and with a wide shoulder to cycle on. The road still followed the coast but now there were various tunnels, cutting out the main hills, what a pleasure. We flew along the road, enjoying every minute of it. We found a good grassy patch to camp next to a restaurant, so needless to say, in no time tea appeared again. It started raining so we went to bed early, not much to do in a tent when its raining. 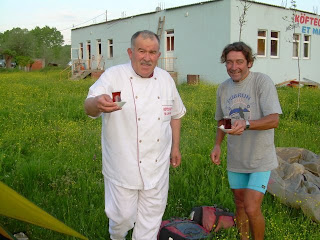 It was still drizzling when we awoke, and rained almost the whole day. We packed up as quickly as we could, dressed in rain gear,and headed East for Trabzon. We were really getting worried about our visas and have heard horror stories of what can happen if one is caught with an expired visa. Our visas expired nearly 3 weeks ago already so we peddled on to Trabzon were we only arrived around 19h00, cold and wet. We found a fairly cheap hotel just off Attaturk Square where we could have a warm shower and a clean bed. I was really tired and went straight to bed.

I ate the last of my salty liquerish ("drop"), which the Dutch girls gave me - what a pity, I so love the stuff, its a surprise it lasted so long. We did 534km in the past 4 days, so a rest day was called for. We also had to solve our problem of what to do next. Do we go to the police and discuss the expired visa before trying to obtain a visa for Georgia, or do we just break for the border tomorrow? 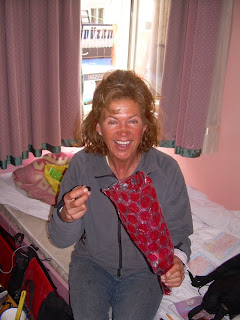 It felt like an easy day, we peddled along on another cold and cloudy day, all along the coast and still on the new road. The tunnels are unlit and pitch dark, so its really hair raising on a bicycle. At Pezar we stocked up again with food and cycled a few km till we found a nice small harbour where we camped between the boat sheds. No sooner had we arrived and balik (fish), was given to us. A local couple invited us for tea, borek and salad in their fancy boat shed. What a feast!! So no need to cook that night.

The big day arrived and in great antisipation we packed up, at least it appeared to be a sunny clear day. Two obstacles awaited us. First to get out of Turkey with our expired visas and second to try and get a visa for Georgia at that border, which we'd heard was not possible!

We arrived at the Turkish border and in true Turkish style they offered us a seat and tea while they discussed our dilemma. They pointed out that we had overstayed our visa by 23 days, and that is a problem. So two options were put to us 1. pay 300 lire and be allowed back into Turkey in 3 months, or 2. pay only 81 lire and get banned from Turkey for 5 years. So taking our finances into account we opted for the latter. Easier than what we thought. I love the Turkish people they just go nice!

So we set off to the Georgian side eager to find out if we could by a visa at the border or weather we will have to camp in no-mans land for the next 5 years! Once again we were lucky and could by a visa there.

We were in 7th heaven and could not believe our luck. We cycled the 15km to Batumi in high spirts and celebrated by taking a room in the town.
Posted by Leana Niemand at 3:05 AM