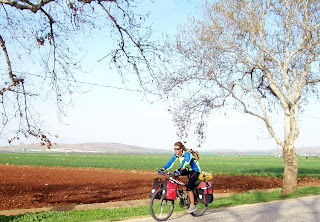 It was with great anticipation that we set off for the border, not knowing if one can get a visa there. So we arrived, handed over our SA passports and without any delay we got our Turkish visa, what a relief!!! We were so delighted we stopped in the nearest town. How different Turkey is from the other countries!! We are definitely out of the desert now. Our little bit of Arabic that we picked up along the way is of no good here. The people are really friendly and constantly trying to feed us. Our first night in Turkey we camped in a park near a lake and people where constantly bringing us tea and we were even invited to a local restaurant where we ate for free. 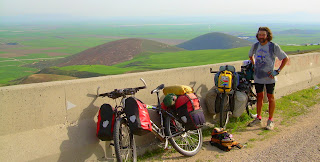 The next morning we said our good bye's and set off over the mountains to a place by the name of Belen where we stayed in a real hotel room, with hot showers, towels, and soap. I had two showers and rinsed my clothes. Included in the hefty price was a breakfast spread. Our stay must have been a total loss to the owner taking the amount of showers and the amount of food we ate.

After breakfast we ambled along for 87km to a place called Botaş. There we camped on the beach, with loads of local spectators, but what a beautiful spot. In Turkey one can free camp just about anywhere without anyone raising an eyebrow. 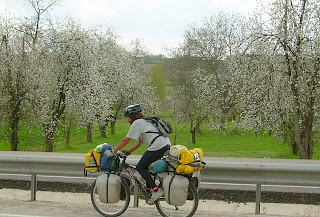 We cycled along the toll road which was an easy ride all the way to Tarsus. I'm sure we are not supposed to cycle on the toll road, but it was a public holiday and the road was very quiet (also very few personnel, everything's automatic). Arrivıng at Tarsus after dark we booked into a room.

The next day we followed the coast and cycled through numerous villages until we reached Kizkalesi with it's very impressive castle just off the coast. We cycled past various ruins until we found a beautiful beach next to the road where we camped for the night. 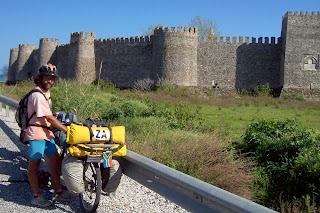 Turkey is truly scenic, but very, very mountainous and we cycled up and up and then down, down, down just to go up again. Unfortunately the wind picked up and we were forced to stop cycling. Fortunately there was a protected wild camping space next to the sea and so we stopped and pitched our tents. The wind dropped in the night, so the next morning we carried on. 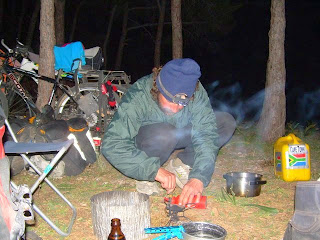 Up, up, up we went until we reached Aydinçic, only 48km later but by now I'd had enough of the mountains and needed a rest. And, it was nice to have a lazy day in a room overlooking the ocean.

Oh, how time flies, we have been on the road for a year!!! 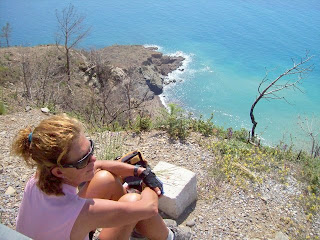 Boy oh boy, is this a mountainous country!!! But the people are so friendly, they even came running after us with food just as I stopped to take my jacket off. A few km further we stopped to admire the view and more food arrived!! We camped just outside Anamur and just after we got up we were given a fresh eel by one of the local fishermen!!! 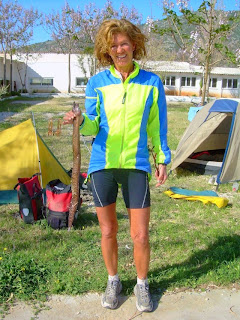 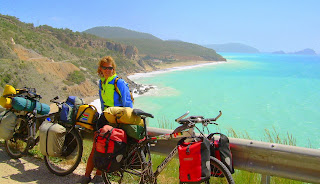 From Anamur to Gazipaşa was only 82km, but even more mountainous than before (did not think that was possible). So we arrived in Gazipaşa dead tired and booked into a room just as the rain came down.

From Gazipasa we had a fantastic ride to Alanya on a flat road (can you believe that). The road followed the coast all the way, and in the touristy Alanya harbour area one cannot help but to sit back and enjoy a beer. Afterwards we found a room, and we'd hardly booked in when a thunderstorm broke loose!!! We stayed over the next day as the storm continued, and filled ourselves with good Turkish bread, cheese, and olives (and Ernest has grown to fancy the Turkish sausage).

On 31 March the weather cleared and we had a very easy ride to Side, where we camped and explored the ancient Hellinistic ruins. 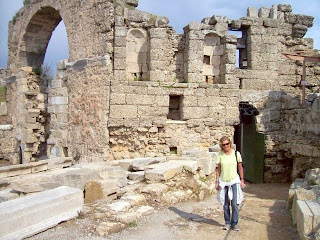 Then on to Antalya, another day of flat roads (life can be so easy at times). We found a very interesting campsite just outside Antalya with treehouses and old wooden jetties (pity it's all dilapidated). We stayed 2 nights as there was a laundry, a job long overdue.

Decision:- Cycle to Burdur, take a train from there to Istanbul, then take ferry across the Black Sea to Trabzon and cycle out of the country to Georgia. We don't have a lot of time left on our visa so we need to make a plan. So we set off over the mountains in the direction of Burdur. It was freezing cold, uphill, and it started raining. So, the going was a lot slower than expected and we reached Bucak that evenıng in the freezing cold and pouring rain. 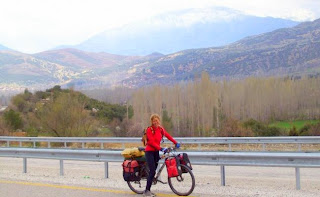 Things can change so easily, got sms from my dear friend Esther to say she will meet us in Istanbul and cycle with us for a few days!!! This was great news as I was dying to see her and now we don't need to rush, we will just extend our visas when we get to Istanbul (hope it is as easy as it sounds). Can't wait to see Esther again, this is going to be so much fun!!

So the next day we cycled right past Burdur, climbed more snow-covered mountains, and cycled through green farmlands until we reached Keçıboru. This is a small village where tourists are unusual, judging by the way the local people stared at us.

On the 5th we cycled on but as we reached Sandliki I had enough of cycling for the day, this is just to much hard work (mountains, cold, and rain!!!). So we stayed over for the night. In fact we stayed the next day as well as the weather took a turn for the worse (we were nervous of snow in the mountain passes). This town seems to be a ski resort of sorts, and obviously doesn't ever get very hot (the room is geared only for cold weather). Walking around town can be a timeous affair, as we get invited into shops for tea (even at the local butcher's).

Ernest's birthday came on a bright sunny day and we packed up and left, so good to be on the road after 3 days in a room. We have just discovered that there is a whole hour difference in time in Turkey!!! How slow can one be!!!

The road seems to be less mountainous now and after 110km we camped in a farmers field, with cows and all!! The spot was next to a petrol station so we had loads of people coming to chat and bring us tea and Turkish delight.

Again it was freezing cold in the night and once again we woke up with ice on the tent. After some more tea we left (at around 10.45) We met 2 cyclists from Germany (the first since Sudan) cycling for a 6 week holiday.

The road between Altintas and Inonu is definitely porcelain country and there are various porcelain factories all along the road. It started raining again and we were offered accommodation by a local man in his house (a container divided into two rooms). We, however, opted for a road side motel where it was nice and warm but it had a bit of a light problem (automatic motion sensor switches light off and on all the time). Ernest fixed it so we could at last read in peace.

Ernest has taken to picking up all kinds off things along the road, mainly tools, he claims that a no 10 spanner is fits the nuts on his bike racks, and an adjustable spanner seems to be a tool no man can cycle past!! Well it came in handy, he even fixed the shower door that could not close properly.

Once again we left very late, it is really cold in the high lying areas, and hard to get out of bed. We met another lonely cyclist along the road on his way to Beijing. The rest of the day was mostly downhill (at last) and we were lucky enough to find another nice bit of green grass next to the road to camp.

What a fantastic day, a perfect day for cycling, flowers everywhere, at Gemlik we left the main road and followed the scenic route along the coast. Although very hilly it was a fantastic ride, and we camped in a grassy parking lot right next to the beach.

We packed up slowly, reluctant to leave our nice camp next to the beach, and carried on cycling along the coast, stopping numerous times to enjoy the view (or was it to rest). The road was still extremely hilly (true to a scenic route). Another road side camp on a green hill overlooking the Sea of Marmaris signalled the end of the day. We could see the lights of Istanbul beckoning from across the bay.

It was a very short ride from where we camped to Yalova where we took a ferry into Istanbul, avoiding the freeways. The road from the ferry port into the city center was very quiet and we were the only people on the road, the reason for that we only found out later, apparently there was a international cycle race on that day!! Good thing we did not encounter them, just imagine what a picture that will make!! 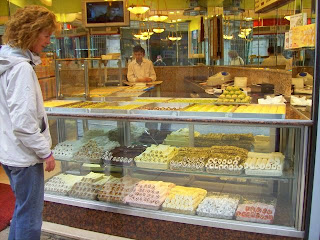 We spent about the entire day trying to extend our visas in Istanbul, but to no avail. No one speaks any English and it seems that there is no one that can help us, they want to extend our residence permit which is not what we after but a tourist visa extension. In the end we gave up and decided it will be less trouble to go to the border, go out the country and come back in again. So the next day we took a train to the Bulgarian border with all intentions to cross the border and re-enter Turkey, but to our surprise we ended up at the Greek border!!! We crossed the border but on the Greek side they did not want to stamp our passports as we had no visa for Greece and so back to the Turkish border!!! There they did not want to give us a new visa as there is no proof in our passports that we left the country!!!! So back on the train to Istanbul. The following day we explored the options of flying out of the country and back in again, but the cost of the flight and the cost of the visa in the neighboring country did not make this a worthwhile option. So the only other option is to just leave it and see what happens at the border when we leave the country, quite a risky option but about the only one available to us.

Esther arrived on the 19th, bike and all, and what a surprise!!! She only had one bag with her and anyone who knows Ester will know that that is a record!! Esther packing economically? 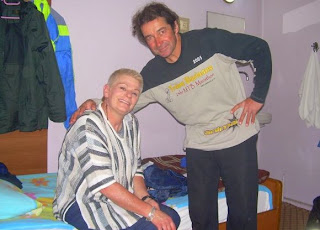 Posted by Leana Niemand at 2:59 AM No comments: