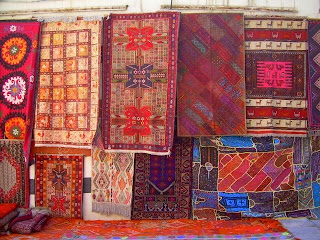 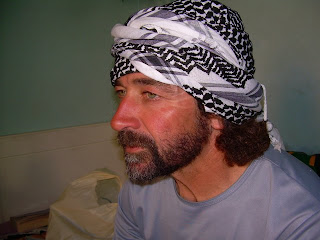 The road suddenly appeared so flat after cycling in Jordan, and what a good day it was with green fields and snow capped mountains in the distance!! So we rolled into Damascus at around 16h00. We spent 2 full days in Damascus walking around the old city and just enjoying the markets.

We left Damascus with a tailwind but the wind soon changed and became a howling cross wind, to such an extent that it blew me off my bike 3 times. After the 3rd time I shouted abuse at Ernest who seemed not to notice the wind, so we fortunately found shelter in a nearby road side restaurant, where the owner offered us a room above the restaurant where we could spend the night on the floor. 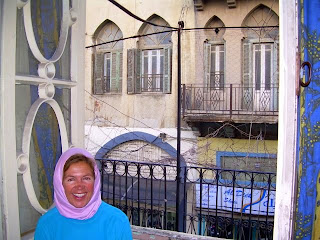 The next morning there was no sign of the wind as we headed off to Homs, which was only 95km away. We stopped for breakfast along the way and a kind samaritan offered to pay for our breakfast, so we had a great feast of humus, olives, cheese and some pastries. So with full stomachs we set off again and Ernest must have fallen asleep on the bike as he went straight into the back of a stationary minivan!! Nothing broken except for the van's tail light. We reached Homes early and booked into the Al Naser Hotel, which is easily the crummiest hotel ever, with really dirty toilets and a paraffin heated shower, for which one has to pay extra. The next day we left our stuff in our crummy hotel room and took a local minibus to Crac Des Chevalliers, a really impressive castle. 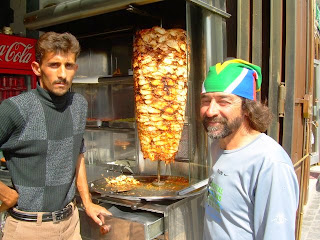 From Homs to Hama was only 45km so there was plenty time to explore the Norias (wooden water wheels) and the old citadel now just a picnic area with a good view over the surrounding cıty.

We did not expect to go all the way from Hama to Aleppo in one day (as it is 150km), but we reached Aleppo fairly late and cycled into the city after dark. I must admit that it was a nice day on the bike and we enjoyed the ride. The next morning we slept late, had a good breakfast, and then explored the souqe's (markets) of Aleppo.
Posted by Leana Niemand at 4:06 PM