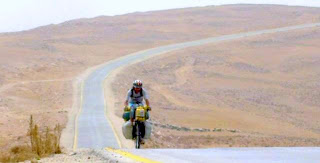 I’m sure that one can take a ferry from Taba to Aqaba, which should be much cheaper, but we were unable to find out if we could do that. So instead of cycling all the way to Taba we took the ferry from Nuweiba to Aqaba, which was really expensive at 70 US per person. The ferry only left at after 17h00 (supposed to be 15h00) so it was dark by the time we arrived in Aqaba and cycled for about an hour into town. Two surprises awaited us in Jordan, firstly things are very, very expensive and secondly it is very, very hilly. Welcome to Jordan!!!

We spent the 22nd exploring Aqaba and strolled along the beach where locals swim fully clothed, bought 1JD’s worth of falafel and got two bags full!!! Forgot that 1JD is worth about R10.00. (One just sounds so little)

As we cycled out of Aqaba, we knew for sure that Jordan is a mountainous country. So up and down we went (mostly up) until we reached Ras An-Naqb. We camped next to the road at more than 1600m above sea level, so it was not just my imagination that we went up hill all day. 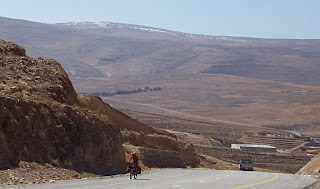 The next morning we cycled the last 44km to Petra and booked into the Valentine Hotel with its pink walls, red curtains and mirror above the bed!! 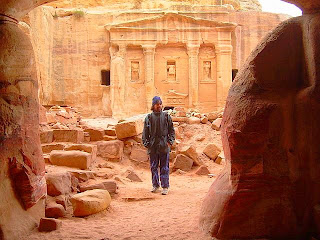 The following day we explored the ancient city of Petra and although this was my 2nd visit to Petra in a short time, it was no less impressive. We walked up to the high place of sacrifice and on the way down it started raining so we took shelter in a tomb and waited it out, it even started hailing!! It rained all night and was freezing cold so we stayed put in our hotel for another day. 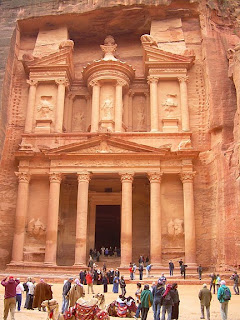 The road out of Petra climbed steeply from Wadi Musa and continued uphill for most of the day. We cycled along the Kings Highway and encountered, once again, children throwing stones at us. (It was like being back in Ethiopia) It was still very cold and there was even some snow along the road! So in true South African fashion Ernest had to stop and throw a few snowballs!! When we reached At-Tafila we had to make a decision, either to carry on with the Kings Highway or to turn down to the Dead Sea. The Dead Sea with its milder climate won so we camped just outside the town of At-Tafila at a view point, and what a view we had of the surrounding mountains and the Dead Sea in the distance.

The next morning we raced downhill all the way to the Dead Sea at 400m below sea level, where we had a swim or rather a float in the salty waters. Once again we camped next to the road, but now at least it was nice and warm.

Unfortunately we had to climb out of the Dead Sea valley to Amman, which is up on the plateau. What a slow day it was, up, up, up at 5km per hour. Along the way we met Peter and Jill who recognized the ZA sticker on the back of Ernest’s bags and stopped to enquire about our trip. They promptly invited us for a braai at their home. So the next night we went to their house and had a great meal and plenty of red wine before they dropped us back at our hotel. Thanks guys!!

The next day we spent searching for a new rim for my bike, but to no avail, so we decided to order one from South Africa. Between Leon and Jaco at Cycle Maintenance Centre in Cape Town, and my sister Amanda we had the parts (including a kg of droëwors) packed and sent to us. Be warned, couriers do not come cheaply!!!

We played the waiting game, but at least we were in a room and the greatest thing about being in a room is (grotty as it may be) that one can shower and wash your hair!! It has been freezing cold up in the mountains and so I cycled and slept in the same clothes, so needless to say, I stank to high heaven!!

I should have used the time to do something about my appearance, I'm shrivelled up like an old prune, don't think even botox will help anymore!! Got Ernest to put some colouring on my hair, that helped a bit, but I think it's too late for the face thing.

We spent the 6th at Madaba and Mt Nebo, where Moses apparently saw the promised land and then died at the age of 120!!! The place is a bit disappointing, nowhere to place your feet and say: "Beam me up Scotty".

The day of the parcel!! At last the parcel arrived, and receiving a parcel is always so exciting!! We eagerly opened it, and not only did it contain bike spares, but also droëwors, cup-o-soup, pasta sauce, jelly babies and a head buff for Ernest in SA colours. So off to the local bike shop, and although their technology was limited they were extremely helpful and friendly. The next day the bike was as new, all shiny and running smooth!!

It was great to be on the road again, the bike was running well and the weather was good, so we made it to the border in good time. Not knowing what to expect and if we could get a visa at the border we were rather anxious, but we got a visa without any problems. I did some very necessary shopping (face cream and face mask) at the duty free shop and could not wait to use it, so due to my nagging we took a room just on the Syrian side of the border. 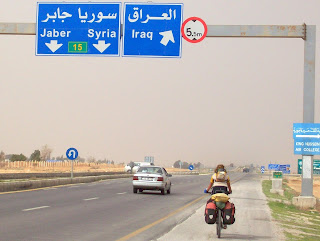 Posted by Leana Niemand at 8:32 AM