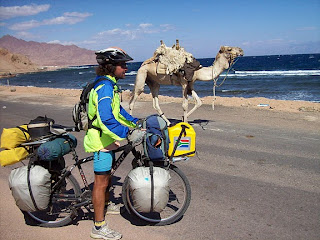 We left Suez for Sinai via a tunnel that runs underneath the canal and then cycled along the Sinai coast for about 115km, a truly beautiful stretch and even more so with a tail wind! It seems that we're not the only ones thinking so, as there are loads of new resorts being constructed along the coast. We cycled on until close to sunset, and then camped a couple of k's off the road past the village of Ras Sudr.

Another fantastic day and even more beautiful than the previous. Spectacular mountain scenery on the left and the Red Sea on the right, so we peddled happily along, stopping ever so often for some tea (we really into our tea these days). We carried on until the road left the coast and soon reached the turnoff for St Katherines, where we set up camp not too far from the Monastery at the foot of Mt Sinai.

St Katherine is located 1570 m above sea level, so the 106 k's from the coast was just about all uphill. We hardly noticed it as the scenery was so unusual with the mountains changing color from white, red, blue, black and purple. We cycled past Ferrin Oasis, with (as can be expected) loads of palm trees and only reached St Katherine after sunset. It was freezing cold by the time we pulled into Fox camp, and pitched our tents as quickly as possible. Ernest still made some food but I refused to leave the tent and sleeping bag.

We waited till the sun warmed the air before we surfaced at around 09h30. We lazed around all day, and in the evening we sat in a large Beduin tent in the camp where they make a fire (amazingly warm inside).

On the 12th we decided to be a bit more active, but we first had to defrost so it was already midday by the time we started up Mt Sinai. A beautiful walk up the mountain with stunning scenery of the surrounding mountains and we only got back at around 16h00 and joined the others in the tent where there was already a fire going.

It was time to pack up and seek a warmer place, it was so cold that there was even some ice on the tent in the morning (way, way too cold for me). Once again it was 12h00 before we actually left and it was a fairly hilly ride heading for the East coast. We only cycled about 90km before it was time to camp again, but at least by then it was already much warmer.

Today was a very short and very downhill ride into Dahab. What a nice surprise. Dahab is a smallish town on the Gulf of Aquaba, and much warmer than the mountainous interior of Sinai. The place also has a real holiday feel to it with a blue blue sea, palm trees, waterside restaurants, and lots of cheap accommodation. We found a room for 30 Egyptian pounds (with hot showers) practically on the beach, and the upstairs bar next door has "happy hour" from 4 to 7 (it seems we picked a good spot). So we stayed a few days enjoying the warmer weather, snorkeling, reading, eating in a selection of the many waterfront restaurants, and just lazing about.

We lazed about in Dahab as though we had nothing to do. By the 19th the wind picked up again and that meant it was time to move on. So we packed up and headed for Nuweiba. Not as easy as it sounds, it was uphill and against the wind, but we have the time, so we struggled on and it was after dark when we eventually arrived in Nuweiba. We went to the first camp we found which was Dolphin Camp, an excellent camp right on the beach, a real paradise.

Nuweiba must be as close to paradise as one can get, so we lazed around some more before we took the ferry to Aqaba.
Posted by Leana Niemand at 5:22 PM