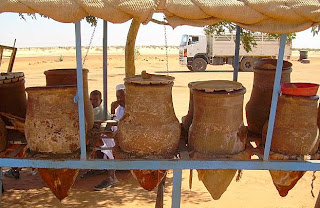 We crossed the border into Sudan at Galabat and headed north for about 80km on a flat but windy road. I did not feel very well and it was extremely hot and indy but we struggled on until we reached Doka where we camped at the police checkpoint, as they had plenty of water for both washing and cooking. Before setting up camp we first cycled into the village and found some potatoes and tomatoes. 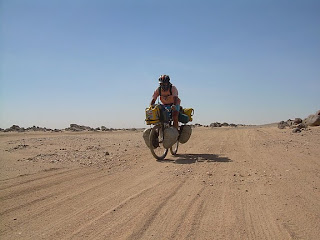 From Doka to Gedaref was about 90km an another very hot, hot day - our second day in Sudan and the second day I had to drag myself along. I felt terrible but pushed on to Gedaref. When we stopped for water at a petrol station we spoke to a local farmer who gave us 50 Sudanese Pounds and so we shot off to the nearest cheap hotel. The man will never know how handy that money came in as I was sick all night and at least could be sick in my own room!!!

The next morning I felt a lot better and we first tried to register at the police station (one needs to register at the police within 3 day's of arriving in Sudan) but they informed us that it was hard for them to do it and that we should register in Khartoum!!! So it was around 11h00 before we finally left. The wind was not that bad and we reached Migreh in good time - a distance of about 97km - where we once again camped behind the police depot to be close to some water.

We were unfortunately traveling into the prevailing wind, so cycling was a bit of a mission, especially since it was day after day, but at least there were various villages along the way and we hardly ever passed one without stopping and having a Marinda or a Pepsi. We did not try the food, which the locals make along the way, as it seems to be made in the morning and then left out in the sun for the rest of the day. Allthough we were cycling on a tarmac road, the road is in poor condition with very heavy traffic (large trucks) all apparently to be heading for Port Sudan. I was dead tired again (which seems to be ever night) and Ernest made a huge pot of pasta and sauce (he cooks every night) after which we went straight to bed.

On the 5th we cycled from our desert camp to Wad Medani which was only about 41km but as it is quite a large place with accommodation and food, we stayed for the night and ate falafel after falafel.

It was 81km from Wad Medani to our next desert camp and another bad, bad day. Very, very hot with a strong headwind. I'm tired and nauseous - things were just not going my way. As we pulled off the road to set up camp I immediately had about a 100 thorns in my tyre. This was just the last thing I needed!!! Ernest was a star again and just went ahead and changed both tyres and put sludge in both. I had no energy to even think about changing tyres (I wanted to go home) .

Once the sun sets iti s dark almost immediately and by 18h00 we needed to find a place to camp. The mozzies are quite wild around here and the safest place is in one's tent. 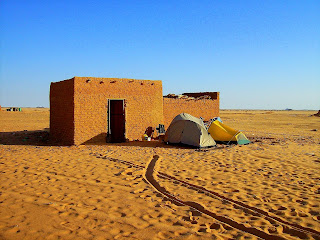 We woke on the morning of the 7th and new it was going to be another day of battling into the wind, Ernest in front and me following as closely as possible, but we made little headway all day. There may be no beer in this country but at least there is plenty of cool water everywhere. Each little village has various pottery urns filled with water, which stays amazingly cool in this heat. That night we found a truck stop with restaurant, showers and toilets and as we were still 50km from Khartoum we camped at the back and enjoyed the luxury of a shower.

The next day we cycled into Khartoum (about 50km) and went straight to the Blue Nile Sailing Club which is definitely the best place in Khartoum, as it is next to the Nile with a nice little breeze coming off the water. There we also met Clive and Denise on a 1954 Triumph heading for Cape Town as well as Charles and Rensche also heading south.

We spent the next 4 days in Khartoum trying to extend our visas (without any success) and trying to register with the police. The rest of the time we spent eating anything in sight.

So it was Wednesday 12 December when we finally left Khartoum, another day of battling into the wind and by 17h00 we have only done 105km. We left the Nile and took the desert road so, as soon as we found water, we set up camp, trying to hide out of the wind.

If ever you want to cycle through Africa, do it from North to South. At least the prevailing wind will be mostly behind you, not like us !!! The wind was especially fierce today and at one stage I sat down and was ready to take the bus (if only there was such a thing) but I kicked the bike and shouted at the wind a few times and then got on again (not much else one can do) . 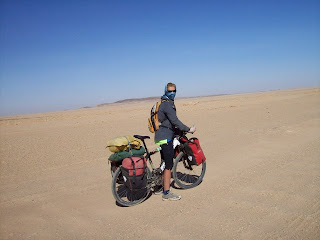 On Friday we only managed 81km from one desert camp to the other. We must have really looked a sight - two lonely cycles at a snail's pace through the desert!!! There were hardly any water stops today and I saw nothing all day but Ernest's back wheel. He must have been dead tired by the end off the day but said nothing and still had the energy to cook a good meal of pasta.

Today was no better and after 111km we reached Deba where we met up with the Nile again (it felt like meeting an old friend). 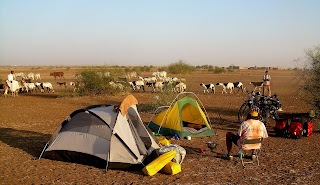 On the Sunday we cycled 92 km from Deba to Sali. The wind seemed stronger every day. We were cycling really close to the Nile and there seemed to be and endless number of villages scattered along the bank of the Nile. By 17h00 we turned into one of these villages to get some water for the night and were promptly offered a room. We had hardly lit our stove to make supper when a large tray with a variety of food arrived.

It was a further 70km to Dongola and needless to say that it was another day into the wind. In Dongola we found some good food and could stuff ourselves for the next desert starve!

After spending the 18th in Dongola to do some washing and get more provisions for the road we left on the morning of the 19th. We stayed on the western side of the Nile and headed for Argo where we crossed the river by means of a small ferry. From Kerma it was about 53km to Kahli (not sure whether that is the name). The 'muggies' are ferocious in this part of the world, they get in everywhere - your nose, ears , mouth - so it's a matter of pitching your tent as quickly as possible and hiding inside till after sunset, when they seem to disappear into nowhere. We made a bit of an open desert crossing and what a good thing Ernest had a GPS and that Charles had given him some readings on where to find the river again. We camped on the bank of the Nile under some palm trees which sounds a lot more romantic than it was.

We are really into our sweet black tea by now and we can hardly wait for the tents to be pitched so we can boil some water for tea (strange things one does if there is no beer around - my mother will be so proud of me!) This was surely the hardest day to date as we were hitting the soft sand and corrugations and all that into a serious headwind!!! To such and extent that we could not even see where we were going. By then we had our buffs around our faces, just so we could breath. 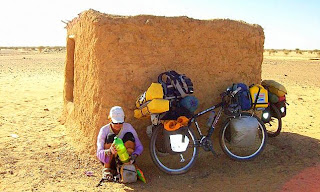 We managed to do another 72km. It is getting really cold at night and in the mornings, so I'm always a bit reluctant to get up and it is 9h30 - 10h00 before we get on our way in the mornings which does not give us a lot of sunlight as the sun sets around 18h00. We tried to do a some longer distances but the going is dreadfully slow. We had better start pushing on if we want to get to the ferry on the 26th, which seems more and more unlikely by the day. 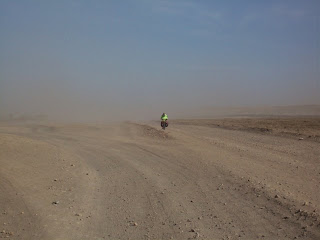 We cycled 74km to Akasha. We tried to leave a bit earlier but still only got away at 09h00. The road was deteriorating now and we soon left the Nile and headed over the mountains. It is getting worse by the day now, not only the wind but also sand, corrugations and mountains. At least we reached Akasha before dark, and there was even a small shop with limited supplies, so we filled up with water and headed out of the village and camped in a dry river bed. Ernest by now has to warm up some water for me to wash as it is freezing cold after sunset. 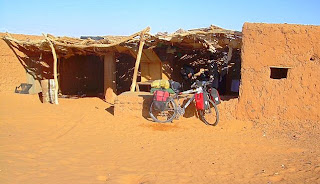 We woke to another freezing cold morning and after some sweet tea set off for the next stretch. The road was quite bad and we had to do a fair amount of pushing of our bikes through the sand. We were still heading over the mountains and there were no water stops or villages along the road, except for one about 30km from where we camped. A further 30km along the road we found a road camp and the people there were kind enough to fill our water containers so we had enough water for cooking and washing. 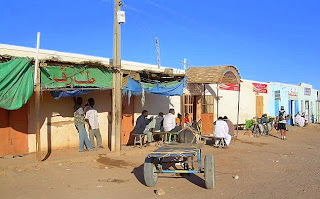 We headed for Wadi Halfa and received a great gift as 30km of the road outside Wadi Halfa is tarmac!!! So we reached Halfa early for a change and found a local hotel and some food. The next day we were up early to get our ferry tickets, police stamps and a million other stamps to get out of Sudan. The ferry left at 16h00 and we even splashed out and treated ourselves to a cabin on the boat!!
Posted by Leana Niemand at 5:05 PM No comments: