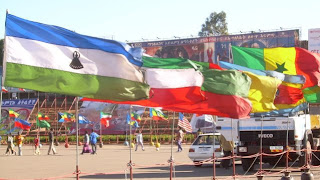 So there I was back in Ethiopia, as if cycling through Africa once was not enough!!! So back in the land of hills, Injera and stone throwing children. Little has changed since 2005, except that there are now a lot more cold drinks and cold beer available in the small villages.

We spent an entire week in Addis organizing visas for both Egypt and Sudan. Addis was a blaze of colour and light as they are celebrating the millennium, so there we were back in the year 2000 again!!!

While in Addis I bumped into Wondey, one of the guides of Tour D'Afrique. What a small world it is!! 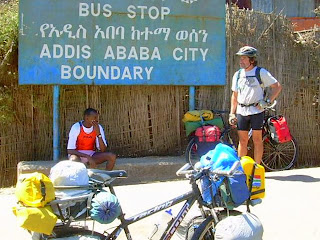 So it was 16 November by the time we cycled out of Addis. How unfit I became!!! The hills going out of Addis killed me and I was half dead by the time we reached Muka which was only 80km away. At least the countryside was colourful with greens and yellows everywhere. What a good time of year it is to visit Ethiopia. It is not too hot and there is a lot more colour. As 80% of the population are farmers, we cycled through farmlands mostly, where people still farm in the oldfashioned way with oxen and wooden plows. 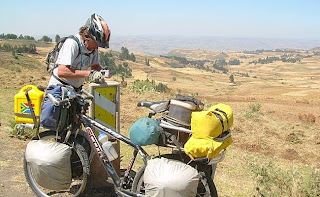 It was only 38km to Fiche but my backside was not so used to cycling anymore so we made it a short day. People still stare at us with their mouths hanging open and children still shout, "You, You, give money" and if ignored, the stones will come flying!!

The 76km to Goha Tsiy was wonderfully colourful, hilly again and therefore fairly slow going, but we found the Blue Nile Hotel and rested up for the Gorge the next day.

On 19 November we descended into the Blue Nile Gorge and to our surprise found the road half tarred, so the section down was easy, whereas the section up was not that easy. Workers were busy working on the road and had just put down a thick layer of gravel, so, baby I am I took a lift with a truck up the Gorge. No need to cycle the Blue Nile Gorge twice in a lifetime. Ernest, however, cycled all the way up with loaded bike and all!!!

Our next stop was Debra Marcos which was about 70km away, where we arrived early and had lots of time to go to the market. We found dried beans, potatoes, onions and chillies. Ernest made a mean bean stew - something different for a change. 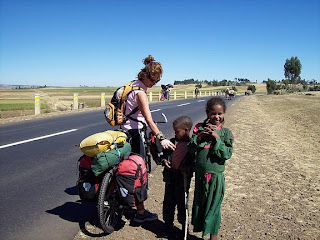 From Debra Marcos it was 85km to Finote Selam where we found a room with a piping hot shower for 30Birr!!! Fruit and vegetables seemed hard to get hold of. It must have been the wrong time of year, but at least there were bananas and oranges in most villages.

On 22 November we cycled from Finote Salam to Dangla where we once again enjoyed the local food. Firfir, my favourite, is Ingera fried in butter and a hot sauce. But by the time I went to bed I knew it was a mistake!!! So it was with the greatest of difficulty that I reached Barhir Dar the next day (will not go into detail). 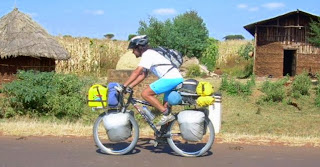 On reaching Barhir Dar we found the Gioa Hotel, which also offered camping on Lake Tana, but we opted for a room and what a good decision. We also spent the next day there as it really is a nice spot and as I was still feeling weak, it was much better to stay an extra day.

From Barhir Dar it was 88km to Addis Zena at the foothills of the Mountains. The road to Addis Zena is, however, fairly flat and stretches all along the lake. We found a cheap room and this time decided to make our own spaghetti and sauce (I am not yet up to the local food). 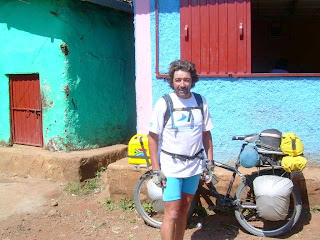 On Monday 26 November we headed for the hills from Addis Zena to Gondar, approx. 100km. Extremely hilly, but the scenery made up for the hills as the views were spectacular. So, a great ride, pity about the head wind in the last 50km. Needless to say I was once again buggered by the time we reached Gondar. We spent the next day roaming the streets of Gondar, as there was quite a bit to see and it might have been our last chance of to buy some essentials before heading for Sudan.

Ernest headed for the border on the 28th, but I decided to stay another day and take the bus (no one needs to cycle the Simian Mountains twice in a lifetime!!!)

So the next day I took a bus to Metema and what an experience, or shall I say rip off. First they charged me for putting the bike on the bus and later they charged me for taking it off again. In the end I arrived in Metema dusty and maybe more saddle sore than on the bike, as the bus seats are rather hard!!! We overtook Ernest along the way and by the time the bus broke down, I was sure Ernest was going to catch up with us. On arrival at Metema things were no better. A real dirty and dusty town where every second hut is a pub/brothel. I found accommodation consisting of a mud room with a bed and electricity that comes on when the generator comes on and goes off when they switch the generator off again.

Ernest arrived the next morning, covered in dust and sweat, and we found another room, not much better but at least a bit more spacious. 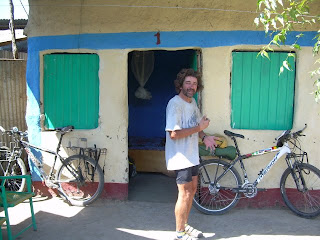 Posted by Leana Niemand at 4:50 PM