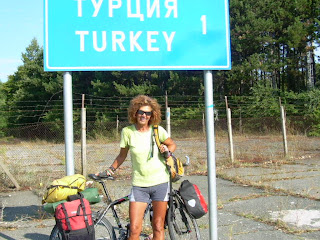 We crossed into Turkey and headed for the nearest town as Eddy's bike's rim is so buckled he could not cycle anymore and while waiting it also started raining, so best to take a room. The rim also took longer than expected to repair.

Turkish people are very friendly and on the first day I have been offered tea, watermelon and coffee. 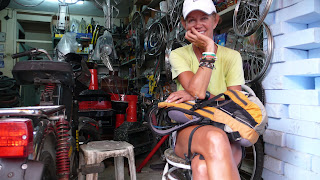 Well, for one, Turkey is not flat, so it is up and down hills all day long again as we head to Istanbul. By 16h30 we reached a picnic site with restaurant and toilets and decided to set up camp for the night as one never knows whether a campsite will be available further along the road. 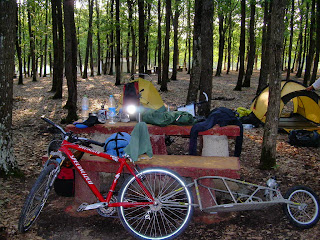 Gee, what a long day. Not that it was that far but coming into Istanbul is like any other large city - a nightmare as the traffic is heavy and one normally has no idea were one is going. None of the campsites indicated on the map is still there and by 21h00 it was time to give up and find a room in an hotel. The room is very expensive and we will try and find cheaper accommodation in the morning. At least I had my first glimpse of the Mediterranean. 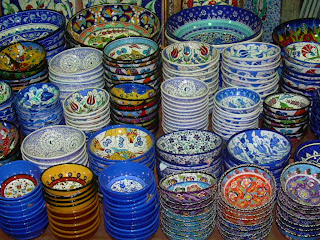 We got up early and found a cheap backpackers in the hart of the tourist area, close to the Blue Mosque. We were sleeping on the roof with about a million others, nice and cosy!!! And will you believe it, bumped into Baltic Cycle Group again. So I decided to go with them for the next 2 weeks, or so, as they are kind of heading in the same direction as myself, and it will be nice to have some company along the way.

1 September - Istanbul to Bodrum - By Ferry

Got up early again, not that one can sleep late on the roof, and went down to the harbour to buy a ferry ticket to Bodrum. As the boat only left at 14h00 I went back to the hostel to say goodbye to Eddie and some of the Baltic cyclists group leaving today as only 15 of the cyclists will carry on to Cyprus.

The ferry is quite a surprise as it is much larger than I had expected with pool, gym, restaurants and the works!! The sea is like a lake so I lay on the deck by the pool all day. The restaurant is very expensive so one can only afford the very necessary. Sat out on the deck until after midnight, not a breath of wind and quite warm - how fantastic is that!!!

More swimming in the pool and laying on the deck until we reach Bodrum at 15h00, then straight on another ferry to Datca, which took about 2 hours. We arrived in Datca at around 19h00 and quickly found a spot to make camp on the beach. There is even a nice little restaurant at the habour so some of us go for a bite and a beer. 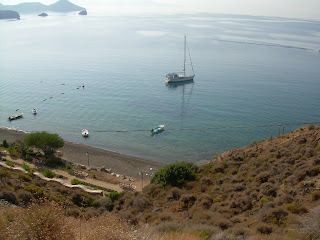 A most scenic road, extremely hilly and hot (this is Turkey) but the views and beaches along the way make up for the hills. Stopped along the way for breakfast and a swim. Turkish breakfast is wonderful, consisting of a basket of bread, cheese, tomatoes, cucumber and olives.

The campsite is great again, right on the beach with excellent views of Marmaris across the bay. This is just too fantastic, warm evenings, beautiful sunsets and a beer on the beach - what more can I wish for!! 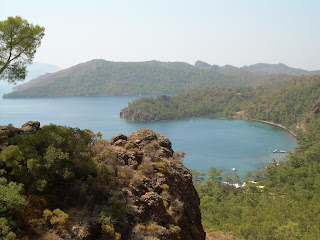 Another very hot day (46 degrees), this time over a mountain pass, hard work, but with excellent views. Stopped midday at Ula, a small village along the way and decided to have a haircut. Very interesting as no one speaks English and all conversation is done by hand signals.

We are met by a local cyclist and lead into Mugla and through the old part of town where we were offered tea and a bike repair service. We camp at the local swimming pool, a another first for me - don't think I have camped at a swimming pool before. Nice green lawns. 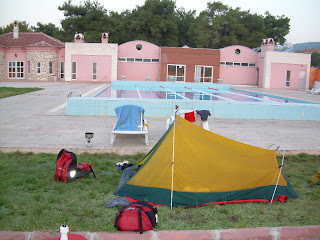 Burent was there at 8h00 to lead us out of the village and along back roads through the forest to Koycegiz where we arrived fairly early and decided to take a boat trip across the lake to see Turtle Beach and the Lycian rock cut tombs of Dalyan. The caves are carved into the mountain and rather impressive.

What a trip! Absolutely stunning scenery, passed the caves and to Turtle Beach where we had a swim but did not spot any turtles. Even found a good campsite at Dalyan where we spent the rest of the evening lying on a timber deck drinking wine. 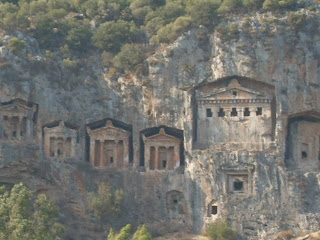 This is really a nice group of people to cycle with, each one does kind of their own thing during the day and all arrive at camp in their own time. Most of the cyclists are Polish and speak limited English, only Bob is from Scotland and Saline from New Zealand. So most of the time it is easier to speak to them, purely because of the language problems with the others. Ella is Polish and a real nice person, so we kind of manage with hand signals and a dictionary. What a mad house!!

The Turkish pancakes are just the best thing ever!. Really large and with a variety of fillings, so we seldom walk or cycle past a pancake house without stopping.

The people in Turkey is so frıendly. They are constantly stopping and asking if they can give one a lift, or they offer one tea and watermelon which, by the way we eat loads of. So we decided to see how easy it would be to hitch a ride. And so we split in pairs and set off. I went with Bob and in no time we got a lift, so the day passed quickly as we got in all sorts of cars. These are mostly driven with one hand only while the other is holding onto a cell phone – quite disconcerting if one is a passenger in the car!

Needless to say it is a very mountainous day again, but the scenery is so impressive that one forgets about the mountains. There are also so many swimming spots along the way that the day passes quite easily.

Olympos is a most impressive town with old ruins and an excellent beach. 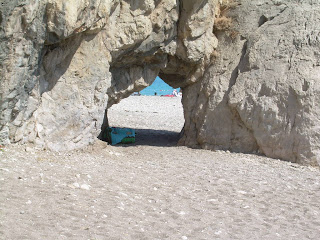 Spent a relaxing day in Olympos, lying on the beach or on pillows on the timber deck at the campsite. We also walked up to mountain the see the natural gas burning through the rocks, apparently it has been burning for many thousands of years. The fuel source for the flames is natural gas, largely methane, seeping through cracks in the earth. 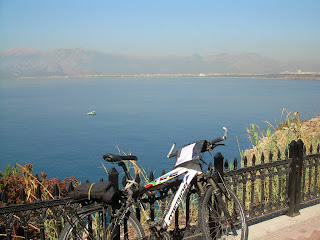 Another ancient town with loads of ruins, very impressive.

While in Alanya we took a walk up to the Seljuk Turkish fortress which dominates the town and offers stunning views over the harbor.

Another excellent Turkish breakfast, then down to the harbour to board the ferry to Cyprus - a 4 hour trip. Cyprus appears extremely mountainous but at least the first 20 km to camp was rather flat. We will see how the rest of the time here will go.
Posted by Leana Niemand at 3:05 PM