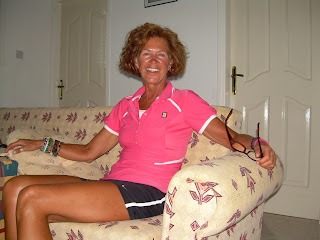 I now left the Baltic cycle group and was offered accommodation by Vidmantas, a friend of Sigitas, so I decided to stay and as he will be away for the weekend, I have the house to myself - what luxury!!

Took the bus to Nicosia to try and find out about the visa for Syria, but the Embassy is on the Southern side of the island and therefore on the Greek side where I can not go, as I have no visa for Greece. No one seems to be able to help so I go for a leg wax and pedicure instead.

A day cycling along the coast and what a fantastic coast line it is. The island is very mountainous and barren but the coast is wonderful with many beaches, and unfortunately many new developments, which spoils the rural feel of the island, but that’s development for you. I understand that it is also endangering the nesting places of the sea turtles which have been coming to breed here for centuries.

Will spend another day in town to see if I can get into contact with the Syrian Embassy. Vidmantes has offered to try and get the correct telephone number, no but no luck as no one will commit themselves to give an answer. So I'm going to try my luck and get a visa at the Syrian boarder. Wish me luck!! 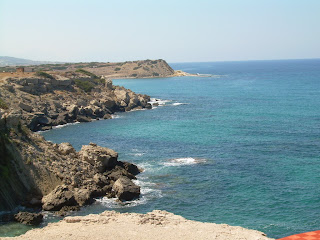 A short day, but such an idyllic spot, I could not cycle past it - lovely beach, bit of a dusty campsite, even a beach bar and restaurant. This is surely as good as it gets. This is the end of the season and only a few super white Brits in their Union Jack swim suits still remain.

I will soon be the naked cyclist as predicted by Esther, as at the rate I'm losing things, there soon will be nothing left to lose. 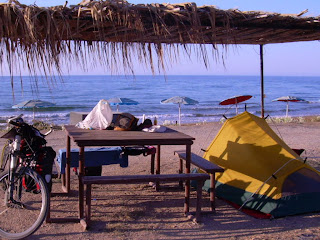 Left my little paradise and cycled over the mountain (nothing like a mountain pass first thing in the morning). Although there are campsites outside Famagusta I opted for an hotel close to the harbour, as the ferry to Mersin leaves at 8h30 in the morning and the ticket office opens at 7h00.

What and interesting old city Famagusta is, one can spend hours wondering around.

I am terribly bitten and have pumps all over my face, arms and legs and nothing seems to stop the itching!!! 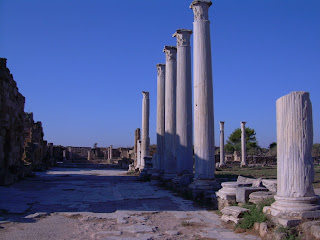 Have been up early just to find out that the ferry is at 8h30 pm and not in the morning as stated in the email. So I spent the day wandering around the Salamis Ruins which date back to the 11th Century BC and how amazing it is - after being destroyed by enemies and several earthquakes, there is still an amazing amount intact. Then, off to the harbour where I met 2 Nepali guys cycling around the world.

What a rust bucket the ferry is, very basic but at least with some seats where one can try to sit and sleep. The trip does not take 9 hours as stated in the and we arrive at 9h00 in Mersin.

Had some drama on the boat as a man fell overboard and (rust bucket or not) the ferry promptly turned around and picket him up again.

Still with the 2 Nepali guys, as they are also heading for Syria. We decide to take the bus to Atakia as I'm worried about the Syrian visa. If I can not get it on the border, there will be enough time left on my Turkish visa to go back to Ankara to try and get a visa there.

In Atakia we found very good accommodation at Sister Barbara where we stayed for the night.
Posted by Leana Niemand at 3:30 PM